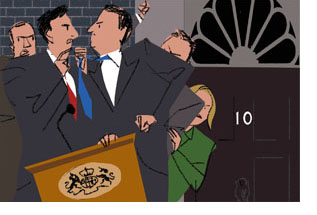 British general elections are rarely things of beauty but this May promises a new level of ugliness. In the absence of Big New Ideas the debate is likely to be a Punch and Judy slugfest over austerity and the sacred cow of the NHS against a backdrop of UKIP’s immigration agenda.

Our politics is now fractured. The old days of majorities are an age away – we are increasingly likely to find UK plc in the land of unstable coalitions, voting pacts, pork-barrel distributions of cash and unwholesome concessions to the various sets of sectarian nationalists.

Business requires stability and predictability to thrive and invest. Neither is likely after May. We quote few Marxists in these pages, but the Italian Antonio Gramsci had it right when 100 years back he wrote: ‘The old is dying and the new cannot be born; in this interregnum morbid symptoms appear.’

Aided by the unfairness of constituency boundaries, Labour might just finesse it despite the unpopularity of its leader. The Liberal Democrats could be wiped out. And if the Conservatives prevail, victory will usher in a desperate internal struggle over our membership of the European Union and a referendum in 2017.

This unwelcome distraction will have the same paralysing effect as last year’s separatist debate in Scotland. Forget about anything else of a more productive nature until the In/Out issue is finally resolved.

2. Your smartphone will outsmart you

The ultimate personal assistant knows what you want, before you know you want it. Humans with such psychic qualities are few and far between, but not so smartphones. This year, more and more people will use apps like Google Now, which analyses your search history, location and even messages to make suggestions. ‘Predictive intelligence’ will send traffic alerts, recommend nearby restaurants when you’re hungry or even let your partner know you’ll be late home. Just don’t expect much take-up among privacy campaigners.

When your phone isn’t nagging you to brush your teeth or beating you at chess, it might be paying your bills. Deloitte expects mobile payments to increase 1,000% this year, as banks, consumers and vendors increasingly get on board. Apps such as Zapp and Apple Pay will transform how people purchase, meaning the wallet will soon begin to follow the digital camera into obsolescence. 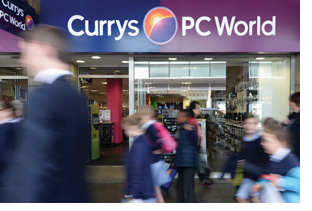 The rationale behind the £3.8bn merger that formed Dixons Carphone last year was simple. Create a high-street chain with the muscle to tackle online giants such as Amazon and win. But despite a strong Christmas and expected annual profits of over £355m, the best-laid plans of boss Sebastian James may be about to go awry.

BT’s acquisition of EE for £12.5bn in December began a wave of ‘quad-play’ consolidation, rapidly followed by the sale of Telefónica’s UK network, O2, to Chinese billionaire Li Ka-Shing for £10.25bn. His Hutchison Whampoa owns UK mobile network 3. If the deal is approved, the new business will have nearly 32 million customers.

All these new combines will be rushing to sell quad-play bundles – mobile, landline, TV and broadband – direct to punters, which could leave Dixons Carphone looking down in the mouth.

Who needs a retailer when you can cut out the middlemen and keep their margin for yourself? But, at least Dixons Carphone would still be able to sell fridges and microwaves. 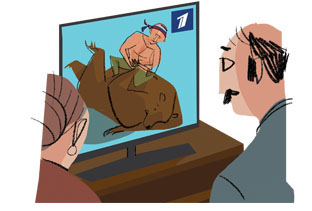 Russia is on the rocks, caught in a perfect storm of plummeting oil prices, crony capitalism and western sanctions for supporting Ukrainian rebels. It can’t balance its budget with oil below $105 a barrel, let alone the $50 rate the black stuff is currently selling for. Even its own central bank has admitted the economy could shrink by as much as 5% this year.

Hiking interest rates to 17% failed to secure the rouble, which lost half its value last year, and the currency has continued to haemorrhage value this year as Russians buy up dollars and value-retaining fridges as fast as they can.

That is disastrous news for Russia’s big companies, which owe some $700bn in foreign-denominated debt. At the end of last year, the government had to prop up state-owned lenders VTB and Gazprombank.

Sooner or later, the state will have to drain what little is left of its foreign exchange reserves to bail out another big bank or oil giant. To try to take everyone’s mind off this when it does happen, President Vlad-the-lad Putin will wrestle a bear, bare-chested on live state TV. He’ll win, of course, but by then the usually stoic Soviet man and woman will be rooting for the bear.

In the opening scene of Bridget Jones’s Diary, the lecherous Uncle Geoffrey asks Bridget when she’s 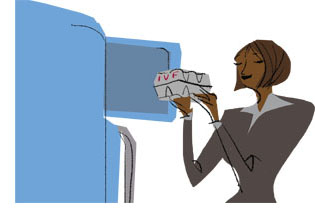 going to get ‘sprogged up’. ‘You career girls,’ he says. ‘You can’t put it off forever. Tick-tock, tick-tock.’

Actually, you can. The average age for a British woman to have her first child is now 30, or 35 (the age when women’s fertility supposedly ‘goes over a cliff’) for university-educated women. Figures from the Office for National Statistics show that pregnancy rates for over-40s have more than doubled in the past 24 years. One in five 45-year-olds hasn’t started a family.

Last year, Silicon Valley giants Facebook and Apple announced a new perk for female staff: up to $20,000 (£12,500) towards the cost of freezing their eggs. The aim? To encourage more women to defer having children and focus on their careers. While egg freezing is still a relatively new development in medicine – only 20 babies have been born as a result of frozen eggs in the UK, according to the Human Fertilisation and Embryology Authority – expect it to become a more popular option for ‘career girls’ wishing to put their fertility on ice.

6. The West Lothian Question comes to the boil

What’s to be done about all those Scottish MPs who sit in Westminster voting on issues that affect only England? Foundation hospitals and university tuition fees, for example, only made it into law with the help of members from Scotland, where neither of these controversial measures took effect.

The issue –  which used to be called the West Lothian Question but is now commonly known as the English Question – has been given fresh urgency by last year’s referendum. Or, more precisely, by the panicked promise of yet more powers for MSPs when the penny finally dropped down south that, otherwise, the Scots really might vote Yes.

But now the long-suffering English are showing signs of their own rebellion, and who can blame them? A host of half-baked suggestions have been rushed out to cover establishment blushes, but they are unworkable. The problem is insuperable, a legacy of the original flawed legislation. So having survived one assault from north of the border, the 300-year-old Act of Union could now be unravelled from the English side instead.

7.  Cybersecurity will finally be taken seriously

Too many Brit CEOs come from a finance or sales background and think they’re tech savvy if they use the fingerprint scanner to unlock their iPhones. Couple this with the national habit of pointless secrecy that means most virtual attacks never get publicised, and it’s no wonder that boardroom attitudes towards cybersecurity have been slack. This is despite DBIS figures showing that the majority of UK firms suffered a security breach last year.

The infamous Sony Pictures disaster has showed just how catastrophic a mega-hack can be, making big cheeses everywhere break out into a cold sweat.

Consequently, this is the year cybersecurity will escape from the IT ghetto and get the time, budget and top team attention that it so richly deserves. 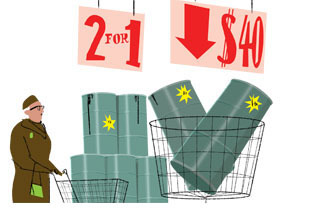 ‘Making predictions is dangerous, especially about the oil price’, as former New York Yankees baseball coach Yogi Berra might have said. Back in February 2014 William Hill would have offered pretty good odds on the going rate for a barrel of Brent crude plummeting from $109 to as low as $46 within 12 months, but that’s what it has done.

There has been angst (and thousands of redundancies) in the North Sea, but a welcome slowdown in inflation elsewhere.

When will the price go back up again? Is it a blip or a structural shift? Caused by oversupply, falling demand, or even global power politics, which are never far from the machinations of Big Oil?

We say that it will fall further yet – through the $40 mark – and stay low, if not necessarily that low, for at least a year. As an added bonus we also declare the end of Opec, many of whose member countries cannot make money at under $60 a barrel. Slick.

9. SEO will get harder

Those of you who’ve searched the internet before will know it’s not like asking a person a question. Rather than listen to what you say, Google takes keywords and crunches them through its labyrinthine algorithms to find the most appropriate responses. Or at least, it did. Search is going semantic, as Google learns to understand the wording of your questions. So, instead of typing ‘MT subscription’, you’ll be able to ask: ‘Where can I get an MT subscription?’. You could even say please.

That might sound delightfully civilised, but Google’s ever-expanding algorithm will cause ever-expanding sweat stains for the geeks in your IT department, whose hard work on search engine optimisation (SEO) will be undone. Well-written content on reputable sites will continue to rank highly, but using clever techie shortcuts to manipulate your way to the top will get tougher. Expect Google to answer more of your questions itself via its handy, traffic-leaching information boxes. 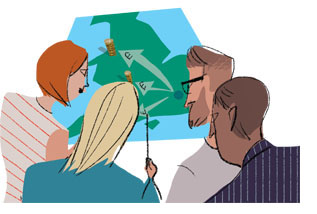 The capital’s dominance is now unarguable – it accounts for almost 25% of UK GDP and at some point this year the population of greater London will reach its highest ever  – surpassing its previous peak of 8.6 million in 1939.

The flipside of this coin is the decline of historic powerbases such as Bristol, Birmingham, Manchester and Newcastle and the growing gulf between the south-east and the rest. Government efforts to redress the balance include HS2 (which may happen) and the revival of the transpennine ‘Great Northern Conurbation’ from Liverpool to Hull (which almost certainly won’t).

But an unheralded correction is at hand. An increasing number of broody professional thirtysomethings will be tempted out of the overcrowded capital by the prospect of snapping up a nice detached house with a garden – and an affordable mortgage – well beyond the M25. These departing Londoners will take their cutting-edge skills and international connections with them, and will help to foment a regional renaissance without any Whitehall mandarins having to lift a finger. It’s Adam Smith’s Invisible Hand at work, and it will be more effective at rebalancing the nation than any PR-heavy government initiative.

And a few outside chances…

. U2 won’t release another free album on iTunes.
. Richard Branson will buy Morrisons and rebrand it as Virgin Food. The first punter to amass 20 million points on the new store’s loyalty card will get a free spaceflight.
. No pizzas will be delivered by drones, but a drone will crash into a manned aircraft or someone on the ground.
. Tesco will not get into many more local planning disputes over building new superstores. Tescopoly to be wound up due to lack of interest.