As you’ve no doubt heard a hundred times, we live in volatile, uncertain, complex and ambiguous world. The acronym for that – VUCA – sounds like it could have been one of the more exotic incarnations of the late, great David Bowie, alongside Ziggy Stardust and Aladdin Sane.

In a rapidly-shifting market filled with ‘one hit wonders’, Bowie reinvented himself several times and took his audience with him. The parallel business lesson is that of changing what you do, keeping your customers and gaining new ones, rather like that which Toyota, Virgin, 3M and Nokia managed.

Though we might now think of Nokia as a fallen titan, the Finnish company was a particular master of the chameleon principle, starting as a paper mill in 1865, moving through rubber boots to power generation and eventually mobile phones.

What then can we learn about corporate transformation and change from David Bowie?

If you run a creative business, you must also find your focus. Sometimes this takes years of experimentation and occasional failure. In Bowie’s case he began performing music at 13 years old, learning the saxophone and playing in a number of mod bands. All these bands released singles, which were generally ignored, yet he kept learning and adapting.

In 1967, he released the music-hall styled ‘Laughing Gnome’ to commercial success. He later formed a mime company and an experimental art group. All of this formative experimentation across disciplines developed the foundations for Bowie’s unique fusion of music and the arts. It disproves the often-held view that success in business is an overnight affair.

2. Surround yourself with great people

Bowie consistently surrounded himself with great people. Importantly he was not frightened to work with people who are better or different than himself – this helped him to get better quicker by standing on the shoulders of giants.

He connected early on with T.REX producer Tony Visconti and guitarist Mick Ronson. On ‘Hunky Dory’, Bowie also worked with keyboard player Rick Wakeman and subsequently produced albums for Lou Reed et al. Throughout his career he had an uncanny knack of working with the world’s best musicians from Nile Rodgers to Brian Eno, Queen and John Lennon. 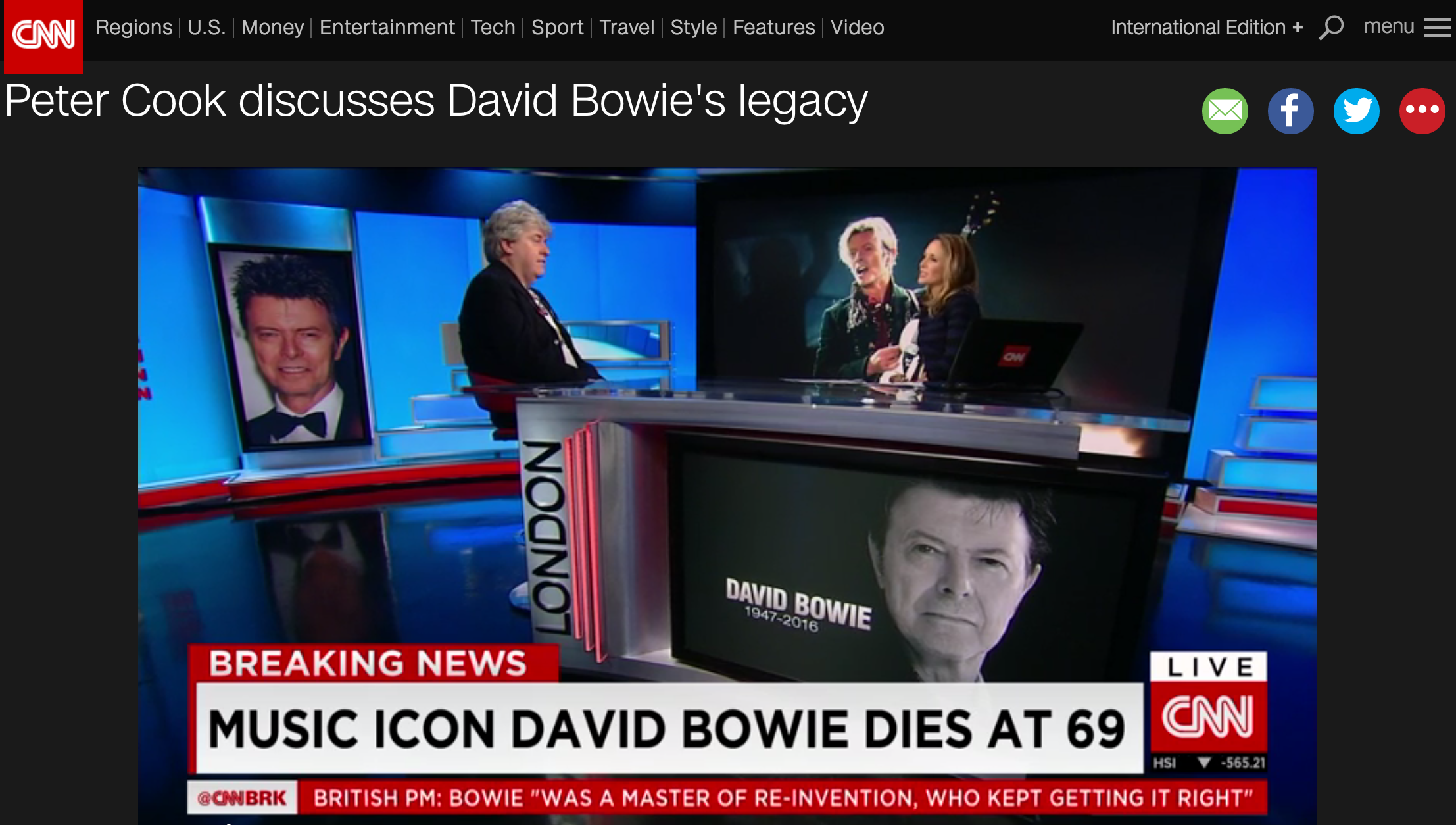 Click above to view Peter Cook on CNN discussing Bowie's legacy of innovation - both in music and business.

In business Sir Richard Branson shares Bowie’s ability of hiring great talents to work with him at Virgin, including David Tait OBE, who masterminded Virgin Atlantic’s beginnings. Richard shares an uncommon ability to find talented people and then let then give their best. This has led to Virgin’s ability to diversify the brand from airlines to banking and hotels, having also had to discard some ‘experiments’ along the way, e.g. Virgin Coke.

Bowie reinvented himself from Glam Rock Star (Ziggy Stardust etc.) to Soul Diva (Young Americans) through Ambient Enigma (Low, Heroes etc.) and so on, keeping his audiences and developing new ones. Having killed off his alter ego ‘Ziggy Stardust’ in 1973 he transformed into a soul sensation in just two years. ‘Young Americans’, released in 1975, peaked in the American Top Ten and generated his first US number one hit ‘Fame’.

In business, continuous reinvention and learning are essentials. Kodak paid the ultimate price when they failed to notice the impact of digital photography on their film making business. Being comfortable is never a recipe for success in business. Comfort breeds complacency.

Make yourself uncomfortable to keep developing and make radical changes even when your current strategy is successful. Bowie’s example reminds me of Charles Handy’s idea of the double sigmoid curve (get moving on your next big thing before your current one stops growing).

Bowie developed a fascination with German electronic music in Berlin, which Brian Eno helped him fulfill on the album, ‘Low’. It was one of the most influential albums of the late 70s, as was its follow-up, ‘Heroes’.

Eno used his set of random creativity cards ‘Oblique Strategies’ to influence the musical direction of these albums, creating diversions from linear thinking. It’s an approach exploited by big businesses such as Roche, which have used creativity techniques like   ‘Reversal’, ‘Dialectical Enquiry’ and ‘Superheroes’.

Peter Cook runs creativity and innovation consultancies The Academy of Rock and Human Dynamics. This article is adapted from his book ‘The Music of Business’.

By Éilis Cronin
4 hours ago
Women in Business

By Éilis Cronin
23 hours ago