A set of shared values, assumptions and beliefs. Our image of ourselves. The way we do things round here. Corporate culture is a tricky thing to define, but it can make the difference between success and failure.

You can have all the components of a successful organisation – the right people, arranged in the right teams, working towards the right strategy – but unless it has the right culture it will be like a car without any oil: inefficient and at serious risk of overheating.

Most of us know what we want from our organisational culture. We want one that leaves employees engaged, loyal, empowered to innovate and quick to collaborate, that facilitates communication within and between teams and functions, that makes sure we’re all pushing together towards a clearly defined common purpose.

But what do you do if your firm isn’t remotely like that? How do you actually change something as complex and stubborn as organisational culture?

Deliberately changing corporate culture requires an understanding of both what you want to be in the future and what you are now. The latter is usually where people fall down. While it can be tempting to charge in and try to create something new, remember you can only work with what you’ve got.

‘There comes a point when you need to understand what your business’s culture is,’ says food entrepreneur Charlie Bigham, who’s been growing his eponymous business for 20 years. ‘Then you build on the bits you like and do your damnedest if there are bits you don’t like to get them out.’

In his case, he zeroed in on five ‘key behaviours’: ‘mutual respect, involvement, passion and pride, goal orientated and dare to be different’.

2. Neither top down nor bottom up

‘I honestly don’t think you can do it from the top down,’ says Talita Ferreira, CFO of BMW Group UK and IoD chartered director. ‘My own belief about change is that it’s not top down or bottom up, it’s everywhere all at the same time.’

Three years ago, Ferreira was tasked with overseeing a major cultural change programme. BMW had decided to bring its three non-production companies in the UK into one site and wanted to tear down the cultural walls between them so talent and ideas could flow more easily.

The company knew it wanted a ‘modern’, innovative working culture so it could be more agile in the face of rapid changes in the industry (‘in ten to 15 years, we’ll probably have driverless cars’). But what did that mean in practice, if it’s not top down?

‘We held stakeholder interviews with 80 people from across the business to see what was really important to them,’ Ferreira says.

‘Then a group of young leaders in the organisation took those and articulated them into three values [authenticity, inspiration and collaboration]. Then the three MDs of the three businesses said yes that’s correct, we think those feel right.’

From there somewhat more specific shifts were devised, including moving from ‘hierarchy to networking’ or ‘complexity to simplicity’.

So while abandoning a top down mentality doesn’t actually mean surrendering management’s role in setting the goals or agenda for culture change, involving employees does increase the chances of it working.

Once you’ve identified the direction you want to take your culture, the problem turns to making people listen. Having involved employees in the earlier stages may have made them more receptive, but that’s only half the battle. You’re going to have to do something – and more than once.

‘Everyone doesn’t move at the same pace, especially with bigger generational differences in companies now. The same message needs to be delivered 20 times but in different ways,’ says Ferreira. ‘Early adopters maybe get it at mention or activity number two, but people who are lagging behind might only realise by iteration number 15.’

How you deliver your message will vary from firm to firm. In BMW’s case, it included methods such as peer-to-peer discussions for managers to share their experiences and company-wide summits where employees who ‘got it’ were publicly recognised. Leaders are also expected to practise what they preach, acting as role models for the new culture.

At the heart of it all though is that holy grail of HR departments everywhere, engagement, says Andy Lawson, the UK MD at Salesforce.

For those who aren’t familiar with the firm, Salesforce takes corporate culture very seriously indeed. Faced with one of the more boring topics in business – enterprise software – and the unenviable task of integrating dozens of acquisitions into the firm during its rapid expansion over the last few years, it’s created and sustained a message all about transformation, aspiration, dynamism and fun. 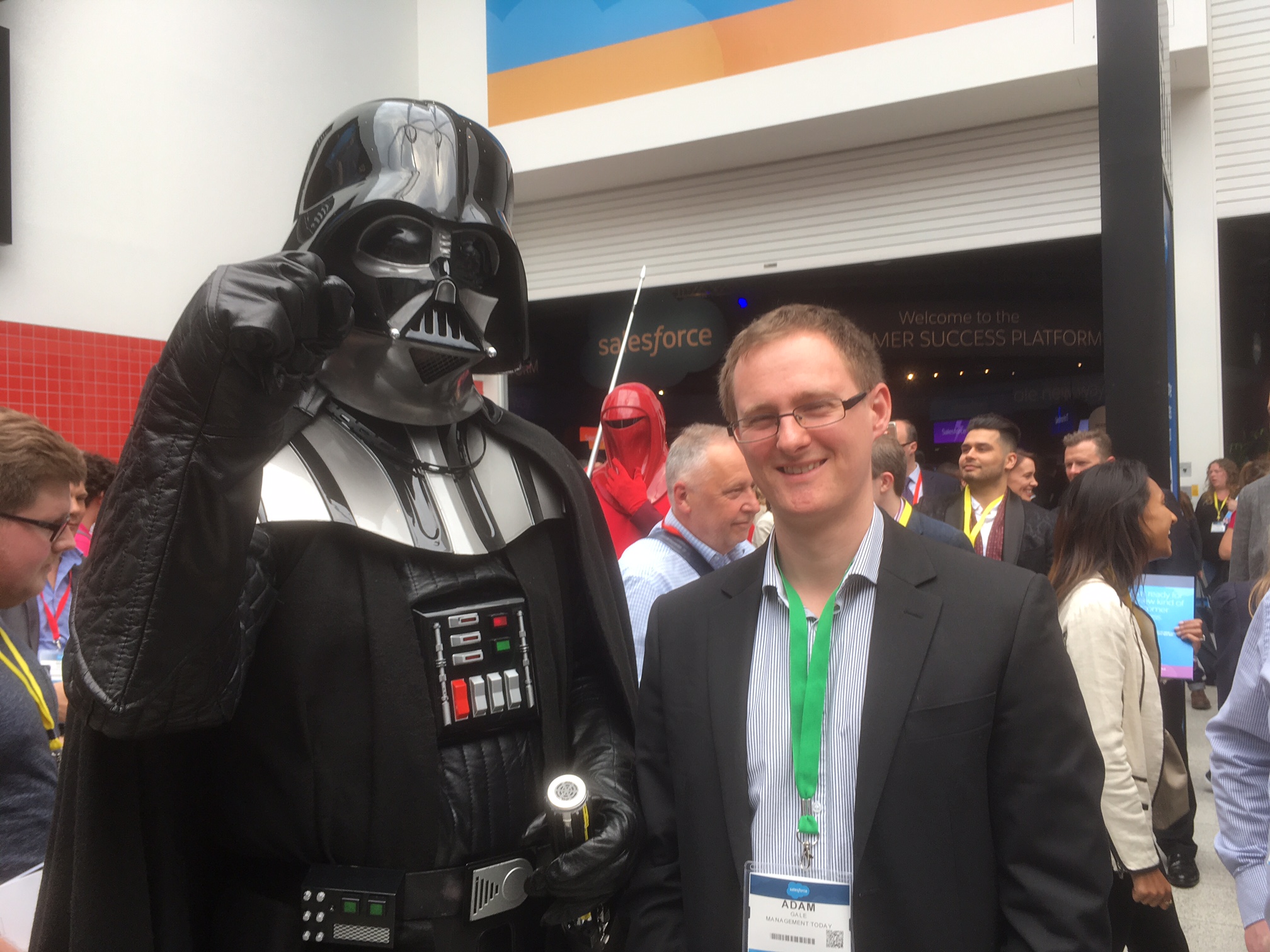 Yes, fun. Its immense ‘world tour’ in London this year was resplendent with games, live swing bands, free pick’n’mix in Salesforce colours (blue, white and occasionally orange), role-playing robots and – bizarrely - large men dressed up as Star Wars characters (pictured, right, with a star-struck journalist). The most notable thing?  Every single one of its employees had a massive grin on their face.

‘Salesforce is all about "Ohana" - the idea in Hawaiian culture that family members are all responsible for one another,’ says Lawson. ‘Our founder Marc Benioff realised this attitude was missing in corporate culture. He thought that if companies put more emphasis on caring and cooperating, amazing things could happen in our workplaces and our communities.’

A strong emphasis on giving back creates ‘a real community that extends past the brand and the marketing language’, says Lawson.

New recruits are given an ‘executive sponsor’ , as well as ‘orientation days, special training and volunteering opportunities, giving teams the chance to get to know each other as people, outside of their day-to-day work roles.’

Making engagement central to your culture creates a virtual circle: more engaged employees are more open to the organisational culture, which in turn makes them more engaged. Everybody wins.

Culture and environment have a deep connection. Just as a negative, closed environment will affect the mood of individual employees, it will also affect how they interact with each other. If you want to create a collaborative culture and you’re able to change your office layout, there are things you can do to help.

‘Open floor plans, comfortable lounge areas, dedicated "scrum" or brainstorming  rooms, and creative spaces are simple ways to get people to join forces and come up with great ideas to help the business flourish,’ says Lawson.

‘And the most important thing? A great kitchen space. As with most great parties, some of the best ideas and conversations always seem to happen right in the kitchen.’

It can be tempting to rush. Introducing sweeping changes and then using heavy-handed hiring and firing to replace those who don’t ‘get your vision’ may seem like a good idea, but it’s really not.

‘Anyone who thinks a culture is something you can pick up off the shelf and put into the business is completely ill-informed. It’s something that evolves over time,’ says Bigham.

'Get on the phone, it's absolutely vital' - Charlie Bigham

This means that any effort to change or mould your culture will need to be ongoing. You’ll need to continue evaluating where you are and where you want to go, repeat your message clearly and in different ways, and only hire people who are going to fit.

‘It’s a slow process and you’ll have to put lots of time into it,’ concedes Bigham. ‘Some people will say it’s a waste of time and money, but I disagree. It’s key to any business.’

If you secretly think being a great leader is a super power, BetheBusiness agrees. Take...

By Kate Magee
1 hour ago
Food for thought