Turbulent times at aerospace giant Airbus, which is currently the subject of several corruption probes over its use of middlemen in plane sales.

Earlier this month its CEO Tom Enders (below) wrote to staff warning the company potentially faced ‘significant penalties’ arising from the investigations and a ‘turbulent and confusing’ period could be on the way.

Today in an interview with the Handelsblatt newspaper, the German said he would be prepared to step down once he is ‘no longer part of the solution’ – though he doesn’t think that’s the case at the moment (last week Airbus’s board said it had full confidence in Enders).

His route to the top of one of the world’s biggest aerospace companies has been pretty atypical. The son of a shepherd, he studied economics, politics and history at the University of Bonn and UCLA. His early career included a stint in politics, working for the German federal parliament and defence ministry and later for several foreign policy thinktanks. 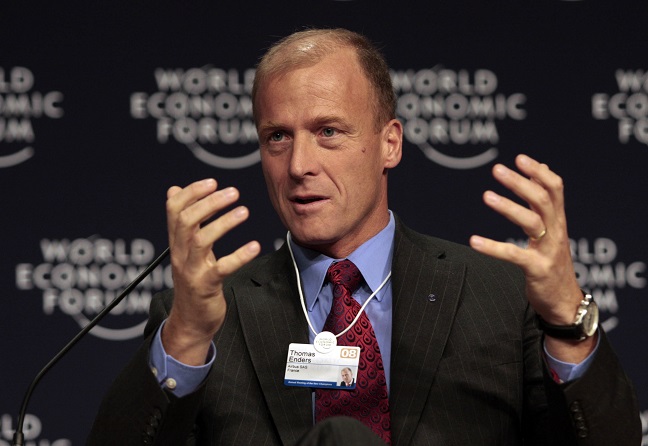 He then joined the corporate world at Daimler-Chrysler Aerospace AG, working his way up to senior vice president for corporate strategy and technology, before landing a top job at the European Aeronautic Defence and Space Company (EADS, renamed Airbus Group after its biggest subsidiary earlier this year) in 2000. He bagged the top job in 2012 and has had a generally successful reign, overseeing a trebling in the company’s share price - though profits have sagged recently because of lower prices, higher costs and technical problems.

The former thinktanker has remained a prominent figure in policy circles, including as a member of former UK prime minister David Cameron’s business advisory group. He’s on the steering committee of the secretive Bilderberg Group of global elites, rubbing shoulders with the likes of Alphabet (Google) chairman Eric Schmidt, Silicon Valley veteran Peter Thiel and many of the world’s top politicians.

Having served with the German Army’s 1st Airborne Division in his early years (and subsequently reached the rank of major as a reservist), Enders is a keen skydiver. In 2010 he even jumped from one of Airbus’s own A400M planes to demonstrate its usefulness for the military (see below). A valuable skill should he need to bail out in the coming months.

By Kate Magee
10 hours ago
Food for thought

By Éilis Cronin
32 hours ago
SMEs

By Paul Simpson
33 hours ago