She's been arrested twice, taken to court and even been sent a bullet in the post, but Jacqueline Gold, Ann Summers' unflappable chief exec, is as defiant as ever. Speaking at MT's Inspiring Women conference Gold told delegates they need to take ownership of their success. 'Why do we feel the need for validation? Men don't,' she said.

Gold is credited with turning the sex toy and lingerie brand from a fringe company to a stunning success. When she started at the business, which was owned by her father David, it was turning over just £83,000. By making the business more female-friendly, particularly with her pioneering Ann Summers Parties, she has turned it into by far the UK's biggest adult retailer, turning over £145m per year. 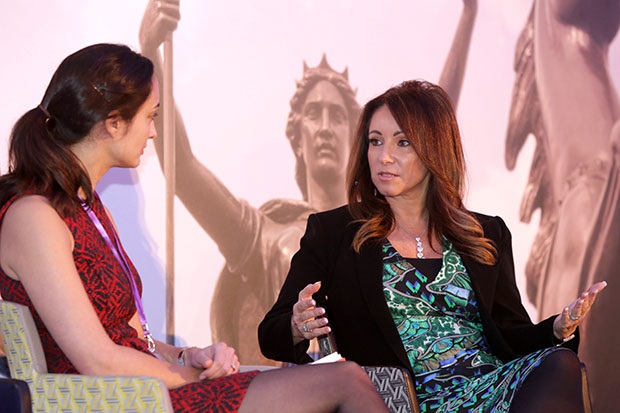 Gold admitted that she didn't have any experience when starting out with the company but said that adversity can be a real driving force for success, and certainly was in her case.

'There is nothing wrong about being uncomfortable,' she said. 'It's uncomfortable to stand in a room in front of a room of people you have never met before. It's uncomfortable walking into a board meeting and challenging the status quo. I strongly believe that if we're not uncomfortable in a real way we are not fulfilling our full potential as a leader.'

Gold told MT this week that nothing she has experienced beats the pain of losing her son Alfie, who passed away at eight months old. She's now determined to make every moment with her five-year-old daughter Scarlett count. 'It doesn't matter if I'm tired, when I get home and my daughter's there and she wants to fly a spaceship to Pixie Hollow, you have got to go with it,' she said.

She also said one of the most important factors in success was courage. 'It's about tenacity,' she said. 'Arrest me and try to shut me down and I'll come back fighting. Take me to court and I promise I'll win. I wasn't trying to shock people, I wanted to empower people in the bedroom – that's all I ever wanted to do.'