Young workers might have it tough in many industries, but entry-level graduate recruits at investment banks are being wooed with increasingly hefty bonuses to ward off competition.

According to salary benchmarking website Emolument.com, banks are having to work a lot harder to hire and retain young talent. As a result bonuses for analysts, the entry-level position where recruits tend to spend two or three years before progressing, have increased 150% this year to around £15,000. They’re typically paid £45,000, so that would nudge up total pay packets from £51,000 to £60,000 in just a year.

Associates, the next rank up, had a 21% increase so the average bonus was £37,500. But that generosity wasn't felt across the board. The more senior directors – usually a position reached in an employee’s thirties – had their bonuses cut by around a third to £100,000. The heart bleeds. 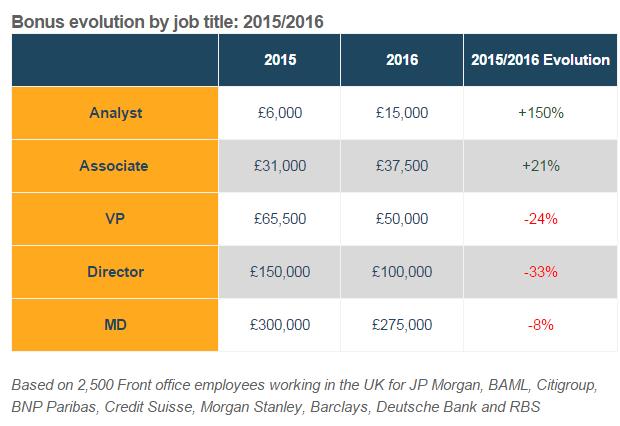 At the highest level there wasn’t such a steep drop in the average bonus for MDs – falling 8% to £275,000. Though that’s distorted by the polarisation of bonuses. Emolument reported a significant number of ‘doughnuts’ (no bonus at all for apparent underperformers) while successful MDs took huge packages home. It’s also worth noting that base salaries have risen significantly since 2008.

The bonus data itself might be misleading for this very reason. There has been a bit more sensitivity shown towards bonuses after significant public backlash in the wake of the global financial crisis. But an EU bonus cap limiting extra pay to 100% of a banker's salary (or 200% if shareholders agree) has served to drive up fixed salaries, according to a Bank of England report.

Shifting their bonus payouts towards more junior staff also suggests banks are focusing on keeping them happy and away from potential opportunities in start-ups – increasingly being seen as a viable and appealing option for bright young things.

The battle for talent is one being waged across industries and banks may feel compelled to up graduate bonuses to combat the perception issues it has struggled with since the crisis. Alice Leguay, chief operating officer of Emolument, said, ‘It’s perceived as being very uncool. It’s very unglamorous.’ Those five-figure bonuses probably don't hurt though.

By Stephen Jones
47 hours ago
Food for thought