‘Darkpools’, ‘predators’ - the latest tussle between Barclays and the US government sounds like it has enough plot devices to make a pretty convincing sci-fi film.

The bank is in hot water with New York’s attorney general, who is suing it over alleged misconduct around its ‘darkpool’, a trading platform that allows clients to trade large volumes of shares anonymously. Investors are clearly on the side of the attorney general: shares slid more than 5% in early morning trading...

The idea is that the darkpool is a safe, womb-like environment for benign, usually institutional, traders who want an anonymous place to make large transactions without the rest of the market knowing until after the trade is completed. The idea is that darkpools’ clients are protected from ‘predatory’, high-speed traders.

To give you an idea of quite how popular these platforms are - and quite how popular Barclays’, in particular, is, here’s a chart showing how many shares were traded per day on April on some of the largest darkpools: 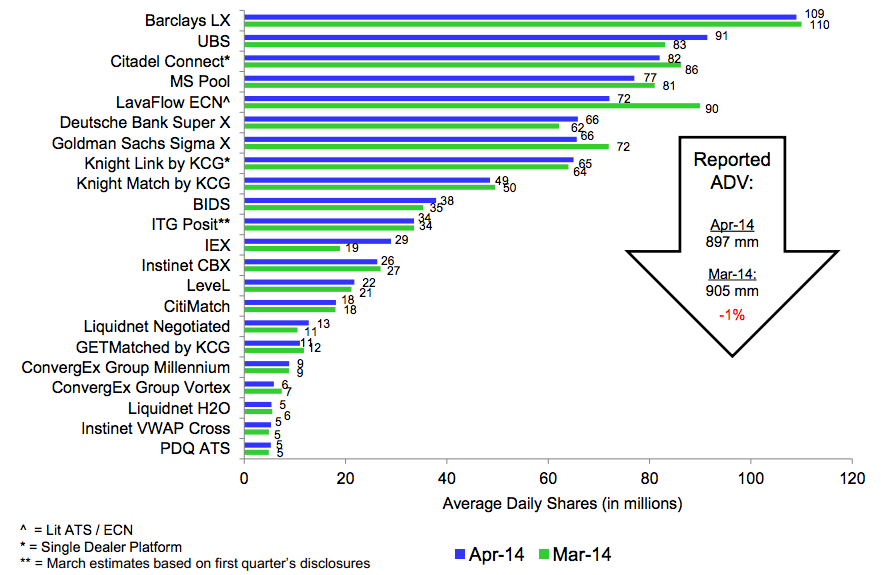 According to the attorney general’s allegations, Barclays lied in its marketing material, removing the name of the darkpool’s largest customer, Tradebot, so it looked like there weren’t any high-speed traders using the platform (‘I had always liked the idea that we were being transparent,’ lamented one employee in an email. ‘But happy to take liberties if we can all agree’).

‘According to the lawsuit, Barclays’ darkpool was full of predators - there at Barclays’ invitation’, said attorney general Eric Schneiderman.

Barclays also allegedly claimed that it didn’t favour its own darkpool when it was deciding which markets to route orders through: in one presentation to an investor, it said just 35% of orders were routed through its own darkpool, when the real figure was more like 75%.

There’s no indication of when this all took place, so it’s difficult to say whether it was before or after the US started suing the pants off  European banks. But Schneiderman said in March that he was planning a crack-down on high-speed trading. At least Barclays can take solace in the fact that it is unlikely to be the only one that ends up in court.