The Beth Chatto Gardens, nestled in the beautiful if little-known Essex countryside a few miles east of the ancient Roman town of Colchester, is five acres of horticultural nirvana. Quietly famous among the cognoscenti for its peerless planting and pioneering naturalistic style, its rolling lawns and expertly laid-out beds are home to around 2,000 types of shrubs, flowers and ferns, many of them specialised varieties rarely cultivated elsewhere.

Framed by ancient boundary oaks, the overall effect is wonderfully calming and a tribute to the garden's eponymous founder, Beth Chatto. She began her work here in 1960, turning a patch of unpromising scrubland into one of the country's most accomplished examples of the horticulturalist's art. Particularly celebrated for her dry garden, unwatered since it was first planted, she has won no fewer than 10 consecutive Gold Medals at the prestigious RHS Chelsea Flower Show between 1977 and 1987.

Some 45,000 visitors a year make the journey to Elmstead Market from all over the UK and indeed the world (like many high-end Brit brands, Chatto is very big in Japan) to pay £6.95 each to enjoy its verdant pleasures. And perhaps to splash out on a few Chatto-reared specialities to take home for their own back gardens. 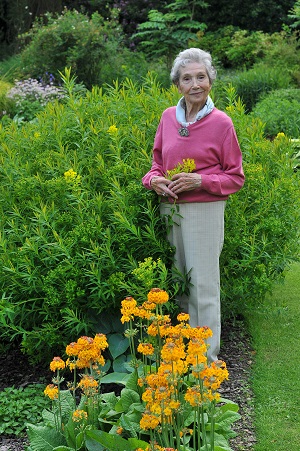 But bucolic surroundings can be deceptive - as a business proposition it is no bed of roses, as Julia Boulton, the former COO of Donington Park racing circuit, who as managing director took on the job from the now 91-year-old Chatto last year, admits.

'My previous experience had been in larger companies and to be honest I thought this was going to be a doddle. But coming here and starting from scratch - I didn't even have a desk or a phone at the beginning - has been the hardest thing I've ever done.'

She quickly discovered that, as anyone who has ever taken a spade to an unyielding patch of ground will attest, gardening is gruelling work. Not only was there the challenge of leaving behind the support systems of larger companies for the much more rough and ready DIY approach, there was also the small matter that - despite being Beth Chatto's granddaughter - she had absolutely no experience of the trade.

'Although I used to come here a lot in the school holidays as a child, Beth always very much held the reins and the family had little direct involvement. It was not a natural thing for me to say: "I'm going into gardening,"' she says.

But Chatto and her small core team under director of gardening David Ward - who together can claim over 100 years of experience of gardening on the site - didn't need any help on the horticultural side. What was lacking was a commercial strategy to secure the future of the enterprise.

Visitor numbers were falling off and trading was getting rocky. 'My grandma's main interest was in the plants and the reputation of the garden,' she says. 'We didn't make much - or some years, any - profit, but so long as everyone got paid that was OK.'

Things came to a head in 2012, when the combination of terrible summer weather and the enormous drain on leisure spending from the Olympic Games hit outdoor businesses all over the country hard. 'No one wanted to go for a day out in the pouring rain,' she says. 'When you have a business that is more interested in integrity than in profit, and then you have a bad year, all of a sudden you're in a financial situation.'

That was when Boulton decided that she might be able to help. 'I thought, I could come down here and run this, it would be a fabulous place to work. OK so I don't know about the planting and things but they need help in other areas. I've got my business acumen to bring to the party.'

As well as the gardens themselves - which in a market dominated by the National Trust and English Heritage are unusual in that there is no stately pile attached - there is a nursery, an online mail-order plant business, a shop and of course a tearoom. There are 25 permanent staff - only three of them gardeners - and a further 25 temporary employees for the summer season.

Turnover is just over £1m annually and Boulton knows it must grow, not least because of the need to build up a cash buffer for any further lean years. 'We need to build a reserve rather than running off an overdraft in the winter. That's not what we want to be doing.'

It's mid-week and early in the season when MT visits, but the garden and tearoom are busy with pre-booked visitors. It's not an accident - Boulton has been doing the rounds, attending specialist trade shows where attractions can set out their stall to tour operators in a bid to get their business.

They may not be the last word in exclusivity but she is keen to keep the coaches rolling in - they are a guaranteed supply of punters who will show up even when the sun isn't shining, buy a plant or two and finish off with tea and a slice of cake before heading home again.

Similarly, a new younger audience is being lured in with Easter egg hunts, Halloween specials and family fun days. All in good taste of course - no bouncy castles or fairground-style attractions. Beth Chatto herself, who still lives on site, is watching.

But as with all seasonal concerns, what to do in the winter is still a tricky problem. 'We need to become a 12 months a year business,' she says, and that means making more of the retail side - the shop and the tearoom in particular. A new retail manager - ex-Adnams - and a gastro-pub-trained chef have thus recently joined the payroll. 'You can't sell plants all year round,' says Boulton.

There's also the future of the brand to consider. 'Beth was a great communicator, people flocked to her and she generated loads of free publicity.' But although the nonagenarian Chatto - who has been called the Elizabeth David of gardening - maintains arm's-length involvement, her days of being on the telly are over. 'We don't have that front person any more. We have to generate our own publicity so the garden has to work that much harder.'

In the nursery, skilled staff propagate a huge range of the plants for which Chatto is best known, many of them the tricky varieties for dry and shady gardens that larger commercial growers won't touch. These are then sold, either on site to visitors or online via the website.

Mailing a packet of seeds is one thing, but mailing a plant in bloom is quite another. Skilled packers tenderly wrap the plants in layers of protective wood fibre before carefully selecting from a range of unusually shaped cardboard boxes and readying the packages for despatch. Around Chelsea time they are always busy. Show gardeners know Beth Chatto Gardens only deals in prime specimens. 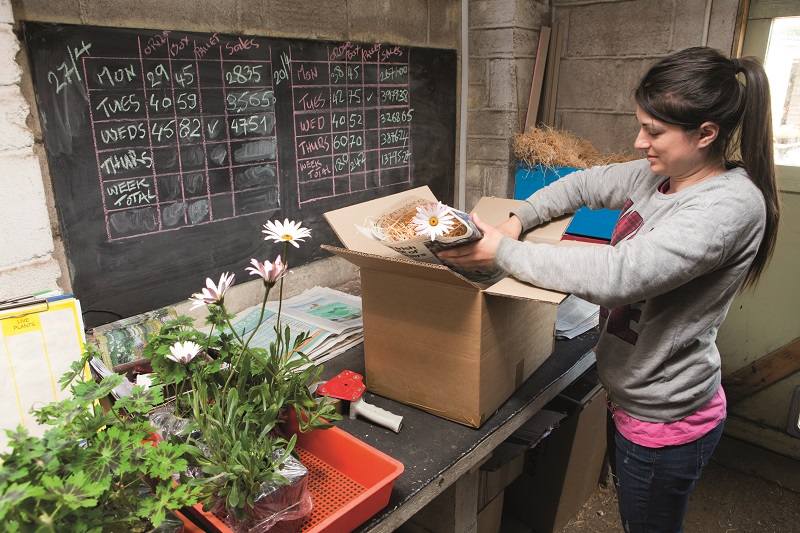 Mailing plants in bloom requires great care and precision (above); Beth Chatto in her gardens (above right).

It's a niche market that ought to attract high margins, but until very recently plants were priced not on the basis of rarity or the degree of time and effort taken to grow them, but more usually on the size of the pot they were sold in.

'We're putting in a new stock control system that will label every single plant so that we know exactly what we're selling and when, how many we have propagated and how many didn't make it. The idea is to get to the point when we can know what each individual plant has cost us to grow. It's a simple question but getting the answer is difficult.'

There's also the prospect of marketing 'instant garden' packs, pre-selected plant combinations that will allow customers to try their own Beth Chatto-style plantings with minimal fuss. Digital natives can follow the garden's fortunes on Facebook. For those who prefer more traditional means, some of her groundbreaking plant guides are being revised and reissued, starting with The Beth Chatto Handbook, a formidably comprehensive list of 'unusual' garden plants, grouped by the conditions in which they will grow best - a snip at £9.95.

Boulton's fellow directors, David Ward and Gerard Page, have supported her all the way, but introducing new technology has been a steep learning curve for all, she says. 'When I arrived here no one even had a mobile phone. If you wanted to talk to someone you had to go out into the garden and try to find them.

'Getting any information was difficult. Our year end was in April but we might not see those accounts until the end of September. It just hadn't been seen as important.'

A new accounting system is also on the cards, and new integrated tills - a lot of change for staff to deal with. But they have been enthusiastic, she says, despite being asked to alter working habits that had remained unchanged for decades. 'People were anxious. They knew things weren't as good as they had been and they were worried. Now they are engaged because we've got our plan and they can see what we need to achieve.'

Underlying it all is the need to protect and nurture not just the garden and the delicate seedlings in the heated nursery tunnels, but also to make sure that the Beth Chatto name regains its rightful place in the gardening pantheon. 'We want to be respected and relevant. Not just a case of: "Oh Beth was brilliant but that's all in the past."'

And, rather like the gardening itself, that's solid hard work that can't be rushed. 'It's not like a normal commercial situation where you can say: "Come on, let's do it in three months." Our mentality is all about maintaining our name and credibility while also building a business that's fit for the next 50 years.'