The giant 90-inch TV has already been on sale in the US for a year, and now Sharp thinks there is an appetite for super-size plasmas in the UK and the rest of Europe too.

Sharp’s Aquos LC-90LE757 supports 3D broadcasts and has three tuners, which means several channels can be watched at once. In terms of size, it pips its closest rival from LG, which comes in at 84 inches, and owners will need to sit at least 3.5m (11.5ft) away from the screen to appreciate its picture.

Because home and room sizes tend to be more generous across the pond, the US has embraced larger TVs more enthusiastically. The average UK flat-owner, on the other hand, may find that there is space in the living room for either a 90-inch telly, or them, but not both. 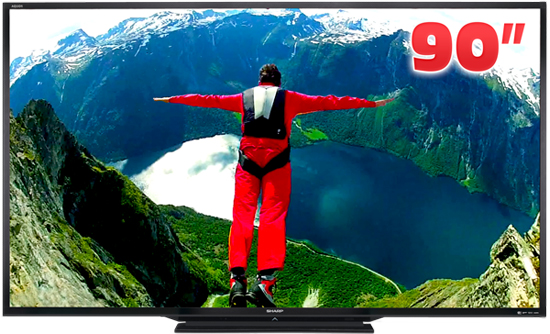 Extra-large TVs are currently a niche market in the UK, mainly because of the cost and space needed to house them. Fifty inch-and-larger TVs account for just 6% of units sold in the UK, according to research firm GfK. Still, Sharp predicts this will all change in years to come - a 90-inch TV is just the tip of the iceberg.

‘The long-term view is that eventually you will have entire walls that are made out of LCDs, and you can allocate different spaces for different usage. Part will be used for TV signals, part for surfing the internet and part to show pictures.’