Not a mild-mannered ruminant, shyly chewing the cud alone in the corner of the field, but one of the most angry and driven minority-hedge-fund sheep going.

Angry, he may be, but he's no shouter. Browder, 50, who 10 years ago with $4.5bn under management, was the largest single foreign investor in Russia, doesn't raise his voice in the meeting room of his Golden Square, Soho office, but speaks with a calm, articulate, deadpan style like the driest of stand-ups.

Browder has operated from his London base since falling out big time with Vladimir Putin's regime in 2005. His lawyer, who was investigating a huge government-bureaucracy-inspired fraud, was then beaten to death in a Moscow prison cell. The hedgie turned human-rights activist has since been a wilful, king-sized thorn in Putin's side.

He was initially a fan of Putin. Browder's strategy had been to buy cheap shares in huge, then inefficient Russian companies such as Sberbank and Gazprom, and fight hard as an activist shareholder to clean up the books and make their dealings far more transparent.

'Putin saw me as useful,' he says. 'He fought the same guys, who were stealing money from me and power from him. He'd step into my fights, although I never met him.'

Browder had arrived in Moscow in 1996, backed with $25m from Edmond Safra, the late Lebanese-born investor. After completing his MBA at Stanford, he took jobs at BCG and Salomon Brothers, but was bored. He wanted to do something on his own, and Russia's Wild East possibilities were intriguing.

At the end of year one, his fund had grown to $125m. The following year, it returned 228%. 'I was a 27-year-old player. Nobody from outside had more experience than me. There were no 50-year-old Wall Street and Zurich guys who knew much more than me. They took me seriously because I had the knowledge.'

The place, despite being rough at the outset, got its hooks into him. 'I loved it. The housing was grim, the food spotty, the weather bad, but I liked the people. They were amazingly well educated and smart. My dearest friends and most loyal colleagues are all Russian. My team here in London is still 80% Russian. A Russian friendship means more than a western one and can involve huge sacrifices.'

Then things changed. 'The key turning point was when Mikhail Khodorkovsky was arrested in 2003. He was the star of Russia, the richest businessman, and suddenly the TV cameras were filming him in a cage. If you're the 17th richest guy in Russia, what do you think? They all came back to Putin and asked: "What do we have to do not to sit in a cage?'"

Browder maintains no oligarch gets to hang on to his cash without cutting a deal with Putin.

Events in Ukraine have eclipsed issues about graft, but Browder isn't alone in believing that Russia is deeply corrupt. Government US cables released by WikiLeaks described the country as 'a virtual mafia state', in which 'one can not differentiate between activities of the government and organised crime groups'. On the Transparency International Corruption Perceptions Index, it comes 127th out of 177, lower than the Republic of the Congo.

But, if we are to adopt Scandinavian standards of governance, we'd never do business with China, South America and most of Africa?

'Not true,' he responds. 'Russians are off the charts. I have a good friend who was briefly prime minister in Georgia under Saakashvili. He later lectured African governments, including Zimbabwe, on reform, and told me that what he saw there was child's play compared with post-Soviet states.'

Observers of the country suggest that Browder knew very well he was playing with fire. That is why he was able to make such a killing on his investments, because the risks were so high that most orthodox investors stayed well clear. So he shouldn't complain when he got burned. He, after all, took home an estimated $125m to $150m in both 2006 and 2007.

'This is the "you get what you deserve" argument. I always knew you could either lose your money, or multiply it tenfold. But arresting, torturing and killing my lawyer at 37? My troubles came from government, not crime.' 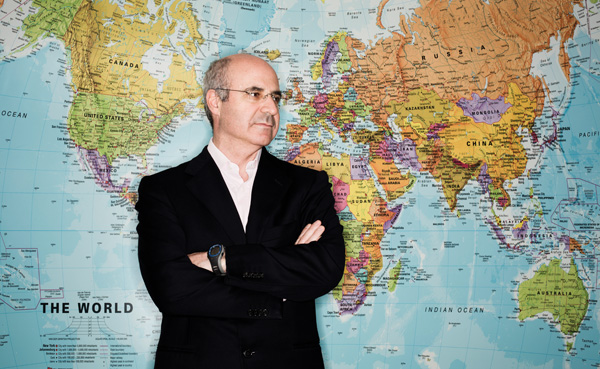 His sea of troubles started when the Moscow offices of his firm, Hermitage Capital Management, were raided by the Russian tax police in late 2005 amid spurious allegations of fraud.

Putin, one imagines, would have approved of this public-spirited behaviour, but Magnitsky was arrested in November 2008. After a year's detention, during which time he was refused treatment for serious health problems, Magnitsky was found dead in his isolation cell, where he'd been handcuffed to a bed and savagely beaten by eight prison officers.

Browder still recalls vividly his feeling, when, at 7am at home, he received the call that Magnitsky had died in the Matrosskaya Tishina (Sailors' Rest) detention centre. 'My worst-case scenario was that he'd get six years in prison. I was thinking how I would help him when he got out: make it up to him, send him on vacation to decompress. It was horrible news, like a knife going into my heart.'

The bitter fight with Putin and the Russian state has been going on ever since. Browder's fund is managed by others while he crusades.

There have been significant victories, principally the passing of the 2012 Magnitsky Act in the US, which punished a long list of Russian officials held responsible for the lawyer's death by denying them access to the US or its banking system. The Russians responded by banning the adoption of children by US citizens.

There have also been skirmishes in the UK. The London libel courts - a favourite place for wealthy Russians - were the scene for a bizarre case last year in which Pavel Karpov, a Russian police officer, sued Browder for defamation. The case was dismissed because Karpov's link with Britain was judged 'exiguous'.

After the recent deaths of individuals who got on the wrong side of Putin's regime in London, including spy Alexander Litvinenko, Browder takes precautions and is reluctant to talk about his London-based family.

He has an interesting background. Earl Browder, his grandfather, was general secretary of the American communist party and twice ran for the US presidency before being twice sent to prison. (Stalin denounced Browderism as an ideological deviation.)

Earl met Bill's grandmother in Moscow. 'She was a classic Russian Jewish intellectual for whom politics was not the highest calling. The Browders became not just scientists, but theoretical scientists.'

Browder's father, Felix, a physicist, went to college at 14 and graduated from MIT at 16. By the age of 20, he had a PhD from Princeton. Bill's brother skipped high school altogether and got a physics degree at 17.

Bill, however, failed to shine sufficiently. 'My problem was that I was not a prodigy,' he notes, with the merest hint of a smile. 'I was just a regular person. So their reaction was there must be something wrong with this kid.'

He resolved to prove them wrong. 'The only way I was ever going to distinguish myself was to rebel, adopt capitalism and become a businessman. Their opinion was that all people in business were evil and crooked. It wasn't until the Harvard Business Review wrote a paper about my company that my father took any notice of what I did. Took him 40 years.'

Browder has a strong analytical mind and is a great digger after facts.

'In Russia, the data is remarkably good. The legacy of communism, which required central planning of everything, is that the regime produces vast amounts of data to find out how much stuff to do and make. The bureaucracy is massive and, with no data protection, you can get tax returns, bank statements, mobile-phone bills. When we went after Sergei's killers, we could even find out their flight data, and discover that they'd been in London, Dubai, Rome.'

His contempt for his enemies is withering. 'They may be extremely evil in Russia in many ways, but they are also extremely disorganised. There just aren't many good people. The regime is populated by bad people who lack talent and are terribly compromised. It is filled with C students from D universities.'

Does he feel responsible for Magnitsky's death? 'Yes. He'd be alive today if he hadn't been working for me. I was responsible for putting him in harm's way.' Magnitsky's widow and children are now in London, where Browder looks after them financially.

Would he have done anything differently to avoid what occurred? 'There is nothing I could have done. Sergei could have pled guilty, cooperated and blamed me. He refused to bear false witness on his neighbour - the ninth commandment. I wish he had given them what they wanted, even if it had caused me trouble - he'd still be alive.'

But hasn't it become an itch he cannot scratch? Driven by principle, guilt and anger, is it not futile for him to try to bring a regime down? 'The moment this regime falls, the first trials will be the Magnitsky Trials - we'll get justice. This is raw criminality. Sergei was a national hero, who uncovered crime in his own country. It will not go unpunished.'

He is right that Putin cannot turn back. 'If Putin falls from power, he loses his money, his freedom and potentially his life. He is a very scared little man. All the chest-thumping - don't be fooled. He's filled with fear, not strength. Bad things will happen to him.'

The word 'tragedy' is grossly overused these days, but in this case it applies, and not just because Browder was born on Shakespeare's birthday and was given the playwright's first name.

For Browder, Putin is a Macbeth figure, 'in blood stepped in so far that should I wade no more/Returning were as tedious as go o'er'.

This tale will not end happily for all.