James Tomilson Hill, who engaged in some of the biggest takeover battles of the 1980s and is credited with inspiring the look of Gordon Gekko in the movie ‘Wall Street,’ has hit the big time after shares in the hedge fund business he runs jumped 68% in the last year.

Hill, the vice chairman of Blackstone Group, owns 17.4 million shares of the alternative-asset manager, according to filings with the U.S. Securities and Exchange Commission last week. The stake is valued at around $585m, after the group’s shares jumped almost 67.5% in 12 months as profits soared in its private equity, property and hedge fund businesses.

On top of this, he also owns an extensive art collection worth around $500m, according to Bloomberg News.

Hill started buying art in the early 1980s and his collection now includes works by Francis Bacon, Andy Warhol and Peter Paul Rubens, artists which have seen their value soar in recent years.

‘I am ferociously competitive as a collector, just like I am in my business,’ he once said. However, he added he ‘doesn’t like to talk about the financial aspect of art’ because collecting art is a ‘highly personal endeavor.’

Hill, 66, was a well-known Wall Street deal maker in the 1980s. His work on the bidding war for RJR Nabisco earned him a role in the book ‘Barbarians at the Gate,’ which memorably said he came across to enemies as ‘an oiled-back Gordon Gekko haircut atop 5 feet, 10 inches of icy Protestant reserve.’

He later joined Lehman Brothers but was ousted as co-chief executive in 1993. Since 2000, he has taken Blackstone from barely a blip on the radar to the world’s biggest manager of alternative assets, responsible for some $56bn.

But Hill scoffs at the loose talk he has heard over the years that Oliver Stone, the ‘Wall Street’ director, might have modelled Gordon Gekko’s hair on his. ‘Oliver Stone never met me,’ he said, according to the NY Times. ‘I don’t think Oliver Stone knows who I am.’

Gordon Gekko v J.Tomilson Hill – how do the two measure up? 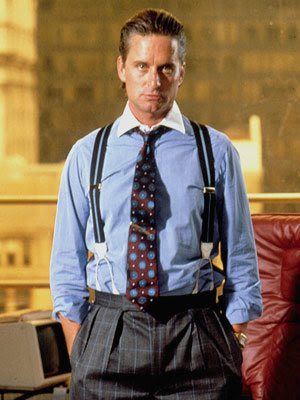 How he made his money: Initially from buying up and restructuring poorly managed companies; later opened pioneering hedge fund Gekko Partners.

Hobbies: Keeps a .45 Luger pistol locked up in a glass case at his Long Island mansion, one of only six such weapons which were ever manufactured. Also enjoys collecting paintings, Persian rugs and vases. 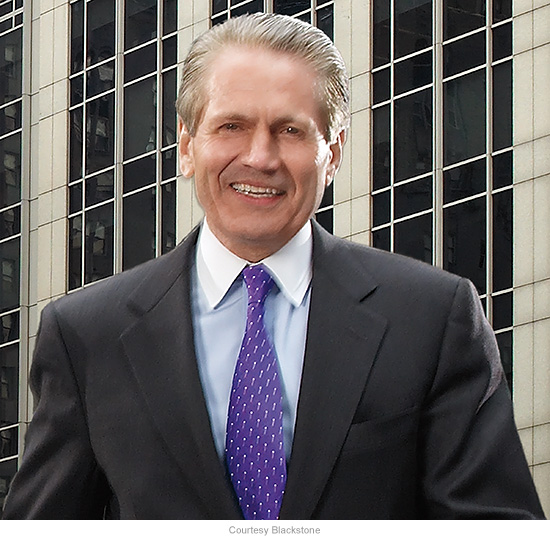 How he made his money: Started as an adviser in mergers and acquisitions. Since 2000 he has been head of Blackstone Group, now the world’s largest hedge fund. Owns some $585m worth of stock.

Hobbies: Has an extensive art collection consisting of four Bacon paintings, Warhol’s 1962 Campbells Soup Can, and 34 bronze statuettes, from the 15th to the early 18th centuries.