You’re the boss of a big bank fighting an uphill struggle to repair its tattered reputation. A junior employee sends one email and all your hard work is ruined. Such is life at Barclays right now after an analyst’s ’10 Commandments’ for a new batch of summer interns was leaked to the Wall Street Journal.

‘Have a spare tie/scarf or two around’ (in case your immediate senior runs out of napkins), ‘be the last ones to leave every night’ and bring a pillow to work (‘it makes sleeping under your desk a lot more comfortable’), were among the edicts handed down by Justin Kwan, who has worked in Barclays’ Global Power & Utilities division in New York for the last two years according to his LinkedIn.

‘You’ll see us called the ‘frattiest group,’ he wrote. ‘Needless to say we are a unique group at Barclays. And with that come unique rules.’

It’s obviously a joke meant to scare the living daylights out of fresh-faced interns desperate to make a good impression and get a full-time job at the end of the nine weeks. After all, Kwan recommends reading the (now known to be a spoof) GS Elevator Twitter feed ‘for some social cues’ and says he purposefully included typos for keen beans to email to him and be ‘off to a GREAT start!’

But it’s uncomfortably close to the bone. Banks took a long, hard look at their summer programs two years ago, following the death of Bank of America intern Moritz Erhardt after he pulled three all-nighters in a row (even though that couldn’t be proven to have caused the tragedy). Nonetheless, The Wolf of Wall Street aura still hangs around them like a bad smell, not helped by the umpteen Libor and fx-fixing scandals that are still dragging on.

Barclays, which is trying to move on from the brash Bob Diamond era under ‘Saint Anthony’ Jenkins, was not impressed, telling the WSJ that Kwan (who couldn’t be reached for comment) ‘was in no way authorized by Barclays.’

‘Barclays is fully committed to creating an environment where both our bankers and our business can thrive,’ it said. ‘We have implemented policies and training guidelines to enable employees to gain valuable experience while at the same time maintaining a healthy work-life balance.’

MT images Kwan won’t be long for his job. Here’s his full email for your delectation: 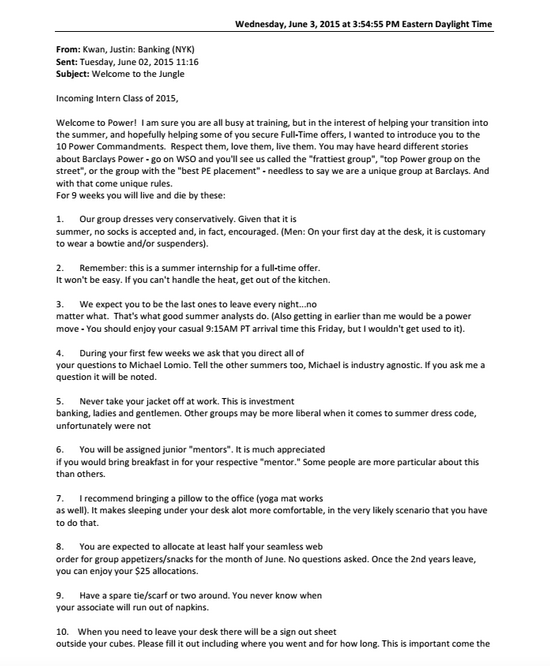 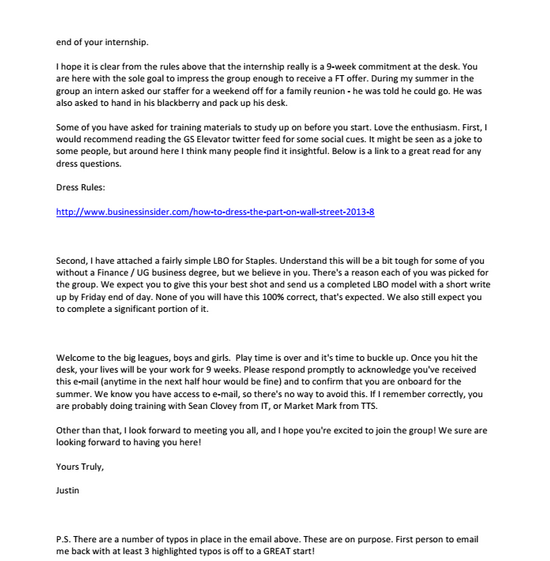