It's certainly true that the new winner of the coveted title of Britain's Most Admired Company is not one to shout about its successes. It has, by the standards of past champions, a vanishingly low profile.

Love 'em or hate 'em, the likes of Diageo, Unilever and Sky - all proud previous holders of the award - are household names. But only those in the know will have come across 2014's trophy-lifter: the latest admiration laurels go to the most successful company you've never heard of, Johnson Matthey.

Actions speak louder than words for Johnson Matthey, the world's largest maker of automotive catalytic converters. Its first-half profits were up 1.6% to £216.4m on sales up 1.9% to £1.51bn - excluding sales of precious metals, which it trades in largely to support its main business. Platinum being the actual catalyst in all those smog-reducing catalytic converters, of course.

Its win is a timely reminder that the best and strongest reputations are cast from the solid gold of real achievement rather than the base metal of spin and hyperbole. 'We do try to keep our heads down and just deliver,' admits new CEO Robert MacLeod, who took over from veteran Neil Carson when he retired earlier this year. 'We've been in the emissions-control technology market for 40 years, in which time our products have prevented 500 million tonnes of pollutants entering the atmosphere. We do things that are not only clever and difficult, but that our people can be proud of.' Johnson Matthey also picks up the criteria awards for value as a long-term investment and the ability to attract, retain and develop top talent.

By consistently investing in R&D - currently £150m a year, maintained even through the crash of 2008 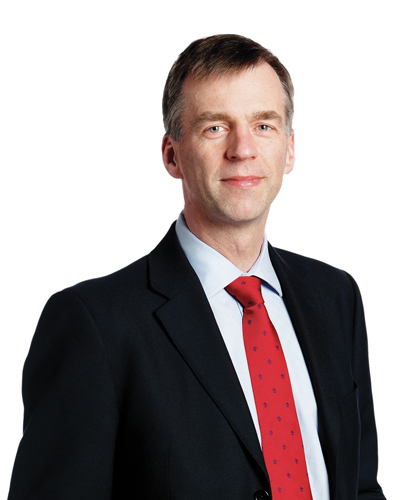 when all about were slashing spending - the firm has made this lucrative area of industrial chemistry its own, cornering 30% of the market. Dating back to 1817 when Percival Norton Johnson set up shop as a gold assayer in London, Johnson Matthey remains a long-term game for MacLeod. 'We're about to enter our third century and the decisions we take are not about the next quarter or the next year, but what's going to be happening in a decade's time.'

That's why it has recently decided to diversify into the field of battery technology, buying the energy-storage business of Swiss-based Clariant AG for £46m in October. The firm makes lithium iron polymer cathodes, a key component of the type of high-energy batteries increasingly used in electric cars. 'We look to innovate in high-value niche markets that talented people will want to work in,' says MacLeod. 'Making a battery for an iPad is one thing, but making a battery for a car is quite another. That will be the hard thing to do.' Three cheers for a well-deserved winner that chooses, as President Kennedy said of the moon shots, to do things not because they are easy, but because they are hard.

In second place this year - up a remarkable 30 places from 2013 - comes a very different but similarly well-regarded business, fashion retailer Next. Its too is a tale of a strong vision consistently applied - under boss Simon (Lord) Wolfson, Next has been reaping the rewards of more than a decade spent assiduously streamlining, tweaking and optimising its systems and approach, right the way from supplier to store - and, of course, online. Even its first profit warning since 1998, £25m of lost profit due to the warm autumn, didn't ruffle many feathers. Given the tough market for retailers and the well-publicised travails of rivals such as M&S and Debenhams, Next is also a deserving winner of the overall awards for quality of management and use of corporate assets. 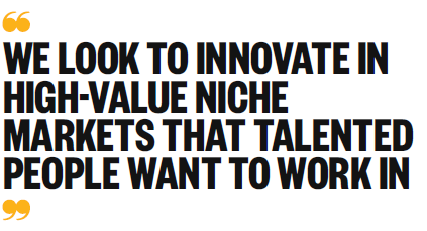 Another stand-out success in a tricky climate is third place easyJet, crowning a vintage year in which the budget airline continued to outpace its opposition. Even Michael O'Leary, the outspoken boss of Ryanair, was forced to admit that 'easyJet wiped the floor with us'. We can only imagine the smile that must have put on easyJet CEO Carolyn McCall's face. EasyJet's share price has risen by over 20% in the past 12 months and, with 2014 profits up 21.5% to £581m and a record 13 million seats available over the bumper summer season next year, the budget airline's original 1995 slogan, 'Making flying as affordable as a pair of jeans', still rings true.

But although Ryanair is languishing down at 85 this year, don't expect it to be out for the count. In August alone it carried a record 9.4 million passengers, after the launch of a new cheap-and-cheerful business class ticket.

As a peer-review survey, the essential question that Britain's Most Admired Companies sets out to answer is 'How do your rivals rate you?' It is based not on hard metrics such as financial performance, but on the more mutable but equally important quality of reputation. The winners are chosen not by a panel of judges, with all the horse- trading that implies, but by every company's sternest and best-informed critics - its immediate competitors.

It's an approach that provides an interesting snapshot of sentiment in UK plc. Professor Mike Brown of Birmingham City Business School, the author of the Most Admired research since day one over 20 years ago, sums up 2014 thus: 'As the economic outlook continues to improve slowly, it's a year of cautious optimism. Firms know it's not all Shangri-La and that there are still plenty of bumps in the road, but they are tentatively looking for growth opportunities all the same.'

This year's survey also suggests that specialists may be gaining on generalists. Many big, broad-based names whose businesses span their chosen markets are notable by their absence from this year's top 10. The aforementioned Unilever (11th), Diageo (12th) and Sky (14th) for starters. There are a mere pair of retailers - Next at second and John Lewis a worthy fifth (see box on p32) - a sector that has provided more Most Admired winners over the years than any other.

arenas are on the up. As well as winner Johnson Matthey, there are three others in the top 10: valve actuator experts Rotork, surfactants and cosmetics ingredients maker Croda International and property real estate investment trust Derwent London, which focuses on commercial space in the capital.

So perhaps as overall levels of competition rise again, those firms whose modus operandi includes genuine proprietary knowledge are the ones that prove harder to disrupt. (Having said that we must also acknowledge that the specialists have not all had it their own way. Many of them rely heavily on global markets for their income and the strong pound has been an abrupt check on the competitiveness of exports this year.)

In fourth place, the Emerald Isle's favourite odds-giver, Paddy Power, puts in its best-ever BMAC performance. What better note for long-time CEO Patrick Kennedy to bow out on? He is being replaced by Andy McCue, currently head of retail for the UK and Ireland. Fittingly for a firm known for attention-grabbing PR stunts (masterminded by 'mischief champion' Harry Dromey, son of parliamentary power couple Jack Dromey and Harriet Harman), Paddy Power also takes the award for quality of marketing. 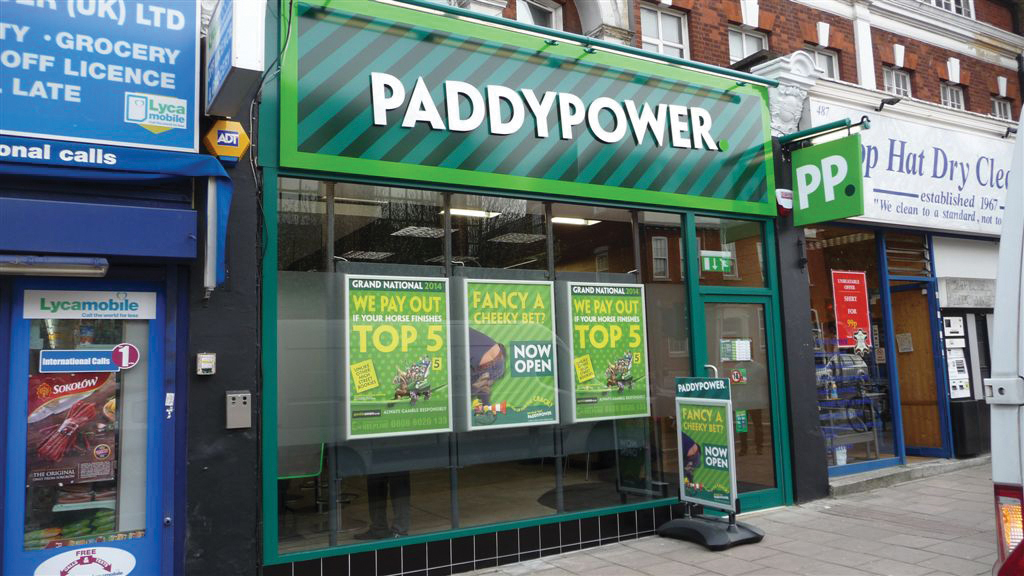 McDonald's celebrates 40 years in the UK with its highest-ever position: its remarkable 32-place jump makes it the second-biggest riser in the top 10. Curry may have replaced fish and chips as the UK's favourite fast food, but Brits love a Big Mac or McChicken Sandwich too - three million of us eat there every day.

However, the golden crampons for 2014's highest climber go to pharma giant AstraZeneca. Fresh from fighting off a £69bn takeover bid from the US's Pfizer, which seemed driven more by tax expediency than any real commercial synergies, AstraZeneca leaps no fewer than 158 places to 54th. If Pfizer returns for another go, let's hope Astra can best it again.

ast year's winner of the award for Britain's Most Admired Leader was Justin King, the now-retired ex-CEO of Sainsbury's. This year remains true to form inasmuch as the title goes to another retailer: Andy Street of the John Lewis Partnership. His outspoken views on the injustices of multinational tax avoidance by the likes of Amazon (not to mention the hopelessness or otherwise of the French) clearly resonate out there in UK plc. But we can't help wondering what his boss - JLP chairman Sir Charlie Mayfield - makes of missing out on the gong himself. Or Street's oppo at Waitrose, Mark Price, come to that.

Having feted the winners, let us not shirk our duty to examine the other end of the league, the turbid depths where the bottom dwellers lurk - Britain's least admired companies.

The bad news for the winner of 2013's wooden spoon, Bank of Ireland, is that it has managed to inch up just one place, with only the unloved Co-operative Bank held in lower esteem. Surely now the only way is up? As for the Co-op Bank, it seems it will take more than a few TV ads featuring earnestly muscled chaps with 'Values and Ethics' tattoos to repair the damage done by disgraced former chairman and 'Crystal Methodist' Paul Flowers.

At 230 - seventh from last - comes government outsourcing giant Serco, down a whopping 67 places from last year on the back of the electronic tagging debacle that cost both former CEO Chris Hyman and chairman Alastair Lyons their jobs, plus a £1.5bn hole in the accounts and a string of profit warnings. New broom Rupert Soames is going to need all his famous granddad Winston Churchill's bulldog spirit to sort out the mess.

But perhaps this year's most torrid tale is that of Nigeria-focused oil-exploration business Afren. It comes in at 232 - only fifth from last - after a twelve month that resulted in that greatest of all corporate rarities, the sacking of a CEO for gross misconduct. In fact, not only the CEO - Osman Shahenshah - was thus dispensed with, but also his colleague COO Shahid Ullah. All as a result of their receiving $17m worth of secret payments, which the company is now mulling over the legal possibilities of making them give back.

To cap it all, two other associate directors - Iain Wright and Galib Virani - also received their marching orders and are facing legal action. Whether introvert, extrovert or somewhere in between, there's not much to admire about a sordid story like that.