With a few notable exceptions, the leaders of Britain’s biggest businesses have generally been reticent to nail their personal colours to the mast when it comes to Brexit - at least in public.

After all, unless you’re actively trying to lobby one way or the other, why take the risk of alienating voters (i.e. customers and colleagues) on either side of the divide?

It can be hard to tell, therefore, what they’re really thinking. That’s why, as part of our annual Britain’s Most Admired Companies survey, Echo Research asked 56 chairs and CEOs representing a variety of FTSE 250 businesses what keeps them up at night, on the proviso that we'd keep it anonymous.

Unsurprisingly, Brexit – in particular the UK’s lack of preparation ahead of the March 29 deadline – is the primary cause of C-suite insomnia, with 37 per cent listing it. A further 19 per cent said that political uncertainty and instability was leaving them restless (though in the context of recent events, that’s arguably the same thing).

"There’s huge amount of work to be done that doesn't appear to be being done," bemoans one CEO. Another who works in an industry reliant on "global trade and strong consumer confidence" complains about "a lack of a clear game plan" creating near-term risk.

But it’s far from the resounding negativity that could be expected.

"Brexit uncertainty, political instability, fake news, skills drought, people’s willingness to believe sensationalist media messages," reels off one FTSE 250 boss. "But in mayhem there is opportunity for agile businesses to adapt quicker than the competition."

It can be hard not to get caught up in the media storm surrounding Brexit, which swings from fiscal ruin to the golden fields of global opportunity, depending on where you get your news. But the reality for leaders is that it’s just one more concern among the many that come with running a business, albeit one that the majority have no control over. Among the other worries leaving business leaders bleary eyed are globalisation (11 per cent), the war for talent (9 per cent) and cyber-risk (7 per cent).

At the risk of beating a rather worn out drum, business leaders need certainty, but Brexit is not do or die for UK plc.

Regardless of whether Brexit happens or not, deal or no deal, businesses will continue to plot a course through the political headwinds. Our hope has to be that, as they do so, they are also able to confront the other challenges they face, as their competitors overseas surely will. 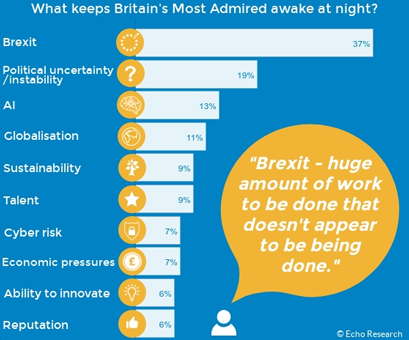 12 hours ago
Food for thought

33 hours ago
Food for thought