There was a time when eating out was a rare luxury, reserved for wedding anniversaries, 40th birthdays and celebrating a promotion. While that may still be the case for some, it seems Britain’s restaurants are positively booming as people trade going out and getting boozy for grabbing a bite to eat.

According to Companies House data analysed by finance company LDF, turnover at the country’s bistros, brasseries and burger joints hit £21.6bn in 2014, up 39% from £15.5bn in 2010. LDF said the trend was driven by the expansion of smaller chains such as Wahaca, Chilango and Franco Manca, which have focused on attracting mid-market consumers for whom eating out has become an affordable luxury. 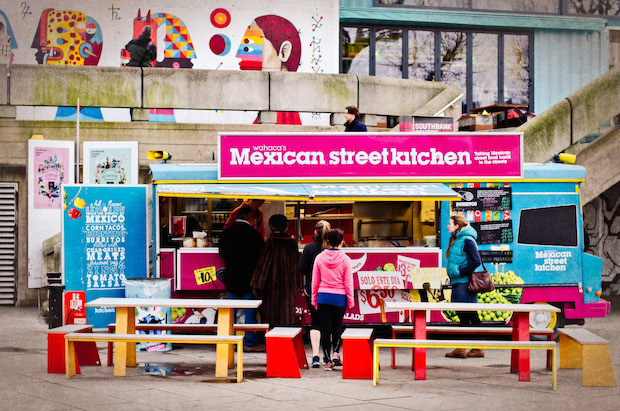 New chains like Wahaca are cashing in on increasing demand. Credit: Garry Knight/Flickr

‘There is generally more money available for people to spend. There’s a feelgood factor in certain parts of the country,’ Peter Alderson, LDF’s managing director told the Financial Times.

While fast-casual chains have been ubiquitous in London over the past few years, their regional presence has also begun to grow. Byron Burger, for instance, has branches in cities including Leeds, Liverpool, Manchester and Exeter, and American import Five Guys has four Scottish restaurants and four in the north of England. Las Iguanas, the 40-restaurant Latin American chain, was launched in Bristol in 1991 and now stretches as far as Torquay and Glasgow.

One thing that's evident in the success of all these chains is that they bring something new to a group of consumers that craves variety - whether it's Byron's upmarket burgers, Franco Manca's sourdough or Wahaca's fresher approach to Mexican food. They also need to be wary, though, of the danger that the fickle British public doesn't suffer another about-face in taste.