An unquestionably optimistic chairman, blind to the rising deficits, a finance director with a complete disregard for the company pension scheme and a group of non-executive directors who failed to scrutinise.

This was the damning picture painted by the joint BEIS and Work and Pensions committee report of the behaviours inside Carillion’s boardroom in the years and months preceding its spectacular implosion in January 2018.

‘Recklessness, hubris and greed’ were the basis of the accusations labelled at the seven member board, whose ‘reckless dash for cash’, aggressive accounting policies and injudicious dividend payments left 20,000 jobs, 420 public contracts and a £1.5 billion bill of unpaid debt hanging in the balance when Britain's second largest outsourcer fell into insolvency.

Carillion’s plight is perhaps the most devastating in a series of recent(ish) scandals to hit major corporations. Tesco’s less than savoury accounting scandal, Volkswagen Group’s now global emissions fiddle  and BHS’s ill-judged £1 sale are just a selection of cases where the action (or inaction) of certain boardroom members has been called into question.

The primary responsibilities of the board are to steer an organisation’s long-term strategy, hold the management team accountable and deliver value to shareholders. By definition it is the board’s job to prevent anything that could cause harm to the company.

So are all these failures evidence that Britain’s boardrooms are broken? We asked an organisational psychologist, an expert in corporate governance and a non-executive director how they see the problem.

‘I think they are broken,’ says Cary Cooper, professor of organisational psychology and health at the Alliance Manchester Business School and author of Boards That Dare.

He explains that many boardrooms have lost the ability to effectively scrutinise how its decision will affect the wider workforce, and suggests lack of diversity as a cause. This doesn’t just mean more women and ethnic minorities, but diversity of background, perspective and experience. ‘We rarely get a research director on the board now,’ says Cooper. ‘We have a very old fashioned idea of what boards should be.’

Without diversity, boards are more at risk of the dreaded group think that has taken down so many organisations in the past.

Another contributory factor to boardroom failure is a 'lack of transparency,’ says Ed Houghton, senior research adviser in human capital and governance at the CIPD.

If all the decisions are taken behind the scenes, in the corporation’s possibly cigar-smoke-filled inner sanctum (we wouldn’t know), it becomes difficult for other stakeholders to know whether the board is doing its job of scrutinising the leadership team. Which, let’s not forget, also sits on the board... 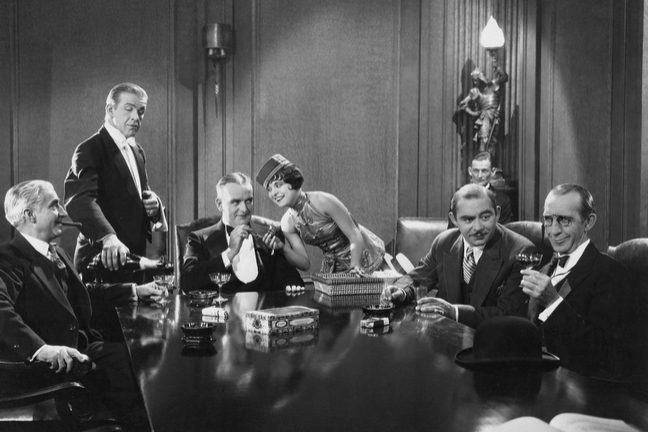 A look inside a typical boardroom?

‘Greater transparency would give us greater understanding of how boards operate and would allow us to build a lot more trust in boards,’ adds Houghton.

Then there’s the role of non-executive directors, who are supposed to add a touch of independence to the board. Often, this is easier said than done, explains Helen Pitcher, chairman of Advanced Boardroom Excellence and of pladis.

'If you don't get the right information provided to you as a board in a transparent fashion, it is almost impossible for the non-execs to know what's going on in real terms,’ says Pitcher.

The danger is clear – without knowing what’s going on, the board risks becoming a rubber stamp.

None of this paints a particularly rosy picture. Monocultural groupthink, a lack of transparency, the absence of sufficient information to allow proper scrutiny can all contribute to boardroom failings.

But that doesn’t mean that the way we do boards – the structure of our corporate governance – is necessarily at fault.

Look at the issues discussed above. Transparency could be fostered by changes in reporting requirements of boards. Publishing full minutes of discussions would surely help transparency, and there are indeed plans to make annual reports spend more time explaining how the board comes to decisions, among other things.

But that doesn’t guarantee that the important decisions won’t just shift to the corridor outside the boardroom, or that the real rationale for decisions will find its way into the report.

Similarly, you can mandate a minimum proportion of women on boards, but there’s no way of making sure that people on boards think differently.

So while there is an FRC review into the Corporate Governance Code that could help, it remains the case that rules and structures alone will never stop bad behaviour. You also need the right people, and by extension the right culture.

This also isn’t easy. Sitting on a board is both an art and a skill, it requires board members to be financially literate and to have the experience, credibility and presence to effectively steer the company. As Pitcher points out, those are skills that are not always the most prevalent within human resources roles, even though an HR perspective would in most cases otherwise be beneficial.

There are organisations like the charity Board Apprentice and The Pipeline - co-founded by Baroness Margaret McDonagh and former MP Lorna Fitzsimons – that are attempting to help train a pipeline of people from various backgrounds to populate boards, but if businesses are serious about governance they should be making inroads themselves.

As the Carillon episode shows it is when a company hits the murky waters that a board’s functionality is truly tested. It’s easy therefore to get carried away with the high-profile scandals and corporate collapses, and imagine a systemic problem. But there are plenty of examples of boards throughout the FTSE 100 and beyond that are highly effective - sadly we don’t tend to hear about these, for which perhaps the media should take some of the blame.

Yes there are bad boards, and yes there are some improvements to board structure and regulation that could reduce risk, but like anything in business it is the execution of the boardroom that counts. And for that, there is no one size fits all solution.

What we can say is that those that are well chaired, have the right people and are reporting in a transparent way that conforms to the spirit as well as the letter of corporate governance rules are far less likely to fail in their duties.

How executive coaching became an industry

19 hours ago
Women in Business