Kosovo does not scream business opportunity.

With a population of just under two million, the post-conflict Balkan nation has only existed since 2008 and has a reputation for corruption and high unemployment.

But Chris Gilbert, CEO of Fox Marble Holdings, wants to change that image. In 2011, alongside business partner Etrur Albani, the former entertainment entrepreneur established the AIM-listed marble quarrying company with the specific purpose of operating in the country.

Kosovo has a long history of marble processing, but its deep resources have lain untapped since the collapse of the industry since the 1990s conflict, and the two wanted to exploit this rich opportunity. The company now holds 40-year mining licences for six separate marble quarries across Kosovo and Macedonia.

"This would not have worked if I were not in partnership," says Gilbert, highlighting that Albani’s local connections were crucial for getting the ball rolling.

Having previously run one of the biggest companies in the country, the state-owned telco PTK (Kosovo’s equivalent of BT), the Albanian-born Kosovan is "highly politically connected" with decision makers on the ground.

An agreement was made with the Kosovan government that, if Fox could bring a publicly listed company to the region to act as a seed for future foreign direct investment, and provide jobs to local workers in the region, it would be given licences to initially open five mines.

Gilbert insists that the company still pays the same taxes, royalties and license fees that they are expected.

A point of difference

"We are a third of the price of Italian marble because extraction and labour costs are so low. So we are very competitive," says Gilbert.

Fox’s business model is based around three types of product: block marble, slabs and cut-to-size, which it sells largely through a network of wholesalers or installers. It’s a sticky supply chain that once you’re locked in, offers suppliers a steady stream of orders.

"If you start supplying a 300-bedroom hotel, they are not going to turn around at bedroom 150 and say you know what, we think we'll do this in a different colour," says Gilbert.

Unlike other mining industries, the global market - worth an estimated €25.7bn in 2015 - is highly fragmented, dominated by a large number of longstanding and somewhat mysterious family businesses, which gives Fox, with its listed status and Kosovan stone, an opportunity to stand out.

"As a British plc we bring a different sensibility to this industry," says Gilbert.

However, getting the market to look past its perceptions of Kosovan sourced marble has been a significant challenge.

"We were in marble, which people didn’t understand because there is no listed marble company anywhere in the west, so we had to overcome a level of uncertainty and a lot of people were very negative about it," admits Gilbert. 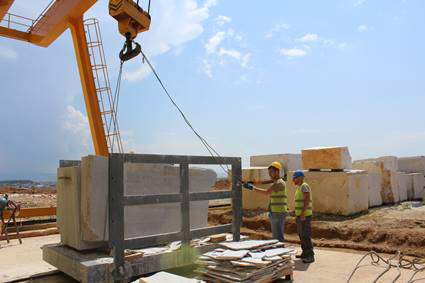 Marble block and workers at a Fox quarry

To mitigate this, the company’s strategy has been two-fold. First Fox established a processing plant in Carrara in Italy, famous for its world leading and long established marble tradition, in order to give the company the "reputational cache of being made in Italy" (the company was also still waiting for its factory in Kosovo to be constructed).

"We didn't hide that it was Kosovan, we're very proud of the fact that this is Kosovan marble because we wanted to establish Kosovo as a high end high quality product."

Then it was about establishing "bragging rights" and reputation by getting its marble into noteworthy projects around Europe, which could then be leveraged to crack the aspirational markets of China and India. The company’s first significant sale was fabricating the bathrooms in Chelsea Creek, a development of luxury apartments in Fulham in 2014.

Fox now has distribution offices in the USA, India and the UAE and in 2016 it opened a processing factory in Kosovo. It’s been slow progress, but it’s starting to pay off.

Following a year of investment, Fox’s operating loss for 2018 was €2.5m (down from €3.4m) according to latest results but orders and output are continuing to increase. The company says that it has approximately 16,000 tonnes of orders confirmed, with an anticipated gross revenue of €3m for the year ending 31 December 2019.

Kosovo is still yet to entirely shake its Wild West reputation. Transparency International’s Corruption Perception’s Index, which tracks public sector misdeeds in 180 countries, ranks Kosovo 93rd with a score of 37 in 2018.*

Fox hasn’t escaped this. In December 2012, four of the company’s five mining licenses were revoked by Kosovo’s Mining and Minerals Commission on the basis that the company had failed to start work on time; a move that Gilbert describes as having "no foundation in either law, fact or compliance."

After a significant legal challenge, and lobbying from the then UK foreign secretary William Hague, the licences were reinstated after five weeks.

The market still presents a "manageable risk", but Gilbert insists the future is very positive. He highlights the Kosovan government’s response to the company’s own early brush with corruption as a testament to "a strong rule of law and a political climate very firmly rooted in the support of foreign direct investment". He also says that since then, the company has been operating successfully without interruption.

He also points to the role of EULEX, the EU common defence and security policy, in helping to strengthen and supervise the country’s legal system.

"We think it’s a wonderful region. There’s a workforce here that is very willing to roll up its sleeves and work very hard," says Gilbert. "Yes there are challenges, but I think we have demonstrated that it’s perfectly possible to operate very successfully."

Inside the world's first 3D-printed office

2 hours ago
Down to business

How does a company run for Gen Z, by Gen Z, behave?

To help glide into 2022 more smoothly, MT asked a range of experts to share...

How to manage addiction and maintain sobriety

What's Lord Alan Sugar really like as a leader?

Lord Alan Sugar is back on our screens as the formidable boss in the latest...

How to boost staff morale

MT Asks: What is your company doing to motivate staff as another year of the...