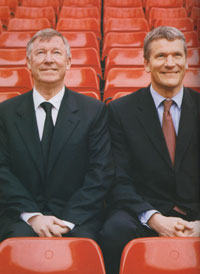 Management isn't just confined to offices. In April 2005, MT popped along to Old Trafford to interview the then Manchester United manager Sir Alex Ferguson, catching him mid-shout. 'Ferguson is living up to his image as the prime exponent of the hairdryer school of management, the regular dishing out of up-close dressings-down, accompanied by physical outbursts that occasionally end in tears, the most famous instance being the changing-room spat that left David Beckham with a cut brow.'

The Scotsman did reveal a more thoughtful side, however. 'I love my players, I do. I love them. But that doesn't mean you neglect your paternal job of saying: "I expect better than that of you, come on".'

Enron's last CSR report was a corker, MT wrote in January 2003. 'Sprinkled with images of sunlit foliage and ethnic faces, it dwells on how the fraudulent energy giant conserved trees in Bolivia and told the security men at its Indian subsidiary to stop beating people up.' But that wasn't enough to save it - or auditing giant Arthur Andersen, which was implicated in shredding evidence for Enron. In October 2002, MT charted the decline and fall of the 'Androids', who had always enjoyed 'referring to themselves as the professional services marine corps - the best of the best'. The critical moment came on BBC's Newsnight, when Jeremy Vine 'kebabed' managing partner John Ormerod over 10-and-a-half gruelling minutes. 'By the end of the summer, the once proud name of Andersen had been expunged from daily commercial life.'