Leon’s director of wellbeing has just punched me in the chest. "Did you feel that?," Julian Hitch asks without a hint of remorse. "It’s so much more powerful when the arm is straight."

He’s not wrong, I mutter to myself.

Just how a martial arts expert came to be involved with Leon is itself an interesting story. Leon co-founder John Vincent bid for Hitch in a charity fundraising event in 2015, winning the opportunity for him to host a session at the company’s upcoming wellbeing retreat.

At the time, Vincent says he was looking for a new approach, and Wing Tsun’s wisdom, focused on winning not fighting, knowing yourself and achieving longevity, opened the door to a new way of doing business. Hitch was invited to come aboard and has been heading up Leon’s wellbeing initiatives for the last four years.

All of the company’s baristas, new starters, leadership team and support staff are now offered the chance to learn Wing Tsun (WT), and Vincent says the martial art’s principles have become central to the company’s internal strategy.

It’s easy to be sceptical about the idea of building a business around principles that date back to the fourteenth century Ming dynasty, but Vincent and Hitch are convinced of its uses as a tool for business and lifestyle success - so convinced in fact that they’ve spent the last four years co-authoring a book about it.

Leon’s growth from under 20 to over 70 stores amid turbulent market conditions, they say, is physical proof of the philosophy’s impact.

Why Wing Tsun? How can it be used for business?

Hitch: "The barista example is really interesting. It can be a challenging position, it’s quite full on. If you get someone’s coffee wrong it can literally make or break their morning so there’s a lot of pressure - and when you’re making 200 in a morning, there's a lot of potential for mistakes.

"We started looking at how we could apply the principles of WT practically to the coffee machine - so that’s things like natural ergonomics and the shortest line. We then focused on the concept of mastery, which is how do you make something that’s repetitive something that’s actually enjoyable and becomes a professional development for you.

"The timings for our coffee test - which is make six coffees in five minutes - were on average 90 seconds quicker and heart rate went down from around 100 to 60 BPM."

Vincent: "One of the fundamental parts of transforming the culture has been getting everyone to know themselves - to understand what drives them emotionally and how to work more effectively with each other.

"The fundamental difference between Leon and other restaurants is that the managers are living free from fear. And they’re able to replicate that atmosphere in their restaurants.

"They're not blocking people or policies with their own emotions and therefore the organisation becomes more fluid and change becomes much easier because people are more willing to accept new ways of doing things."

You say that business isn’t about fighting? What do you mean by that?

Vincent: "Business is often framed as a battle or a war. We talk about targeting the customer, having a war room or annihilating the competition.

"The impact of that is you're always forcing, you're always over-exerting, you're creating aggressive business plans,and you're fundamentally associating success with fighting. That makes you less creative - in combat you go into tunnel vision."

Surely it’s not always that literal - isn’t a fundamental part of business competition?

Vincent: "What did World War Two do for Britain? It destroyed the Empire and made us one of the poorest, stupidest countries in the world. War doesn't help, so why would businesses adopt it as a metaphor?

"In WT the first step is to know yourself and become conscious of who you are both as a person and as a business. Many people have never even asked themselves that. The first thing you recognise is that the conflict that you have perceived is created by you and your fears. So in a personal situation, understanding when you have reacted negatively and being able to understand that is really important.

"Before [I met Julian] I probably focused too much on beating the competition, and now I literally don't give a shit about competition. We’re not saying don’t have some sort of peripheral vision for what the competition is doing. We’re saying don’t make destroying them your objective. Make looking after the customer, and most importantly the people in your company, the objective.

"If you’re seeking to destroy something else you’re not doing that." 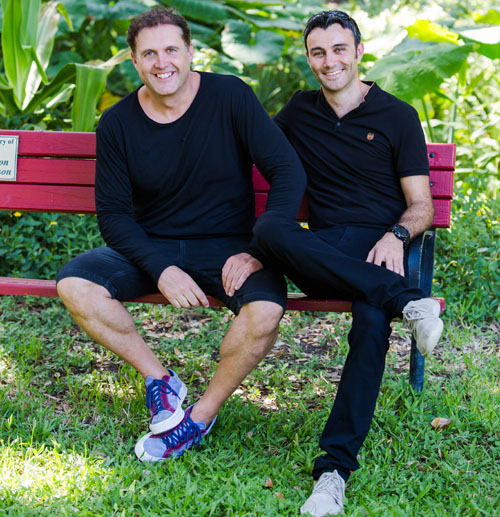 Vincent (left) bid for Hitch (right) in a charity raffle

It all sounds a bit altruistic. Does it really work?

Vincent: "It’s based on a thousand years of understanding human nature and it’s completely validated by all the major psychologists of the 20th century. Businesses that adopt it are successful. Leon is the best performing company in the sector, and all the others that are focused on "fighting" are not performing as well. I would ask anyone who is sceptical about it how "fighting" is working for them? Is it helping you sleep, is it helping your people be more fulfilled? No."

So where should a boss start?

Vincent: "It’s a process where you get to understand ego and what causes conflict in the workplace or in your life in general. So everybody’s first step should be to have a really clear map of your own personality and then to watch out for when a situation, or their reaction to a situation, could be caused by their own ego or insecurities."

Hitch: "Understand that the more you force others, the more it takes of your own energy. So that ability to know yourself and then become more relaxed through that can have a profound change on you and your business."

Vincent and Hitch’s book, Winning Not Fighting: Why you need to rethink success and how you can achieve it with the ancient art of Wing Tsun, published by Penguin Business, is out in November.