The social media backlash after Camden Town Brewery agreed to be bought out by beer behemoth AB InBev back in 2015 was pretty predictable. But for the firm’s founder Jasper Cuppaidge, it was still pretty unpleasant.

‘I definitely was concerned by what people might say but I never thought it would get as personal,’ he tells MT when we meet at the firm’s HQ, in railway arches up the road from Camden’s famous Stables Market.

Almost two years on from the £85m deal, he doesn’t seem to have any regrets. ‘We've taken everything in our stride, nothing's changed, the beer's the same, the people are the same, we're just better.’

Craft beer bores might moan about him selling out but there are definite advantages to being under the wing of the world’s biggest brewer. The firm has splashed out on a new £30m site in Enfield, north London capable of producing 400,000 hectolitres of suds per year. That will allow it to make all of its beer in-house, rather than handing a slice of margin to outsourced manufacturers. Having previously concentrated solely on the UK the firm now exports to the US and France and has plans to target Australia, Cuppaidge’s homeland, next year.

It’s remarkable progress for a company that began just 10 years ago in the cellar of a pub Cuppaidge had bought after a decade working in the trade. He taught himself to brew by reading books and calling up friends he had met in the US.

‘At that stage there were no breweries in London - yeah there were Fullers and Stag, but no small ones.’ Professional equipment was hard to come by. ‘I had to buy a pump from here and a hose from there and make this mash tun from this. Now you can do all of it at the click of a button and there's consultants everywhere .’

In 2010 the company moved to the building it inhabits today and began to grow by targeting the on-trade. It took on new staff, expanded its offices, opened an on-site bar and started offering brewery tours. With a fast-growing cult following, the brand was bound to attract the attention of a big trade buyer eventually.

‘When I first met AB InBev I was like oh my god, that's incredible that they even knew we existed,' says Cuppaidge. ‘Never in my wildest dreams on those mornings in the basement did I think I'd be working with ABI.

‘I didn't know anything about M&A - I didn't even know what that meant, they had to tell me "oh that's mergers and acquisitions". I was lucky I surrounded myself with the best people I could find when it happened.’

Though he was Camden Town’s sole full-time founder, he’s had help along the way, not least from his father in-law John Hegarty, the advertising industry veteran best-known for Levi’s ‘launderette’ ad.

‘He was my mentor - he still is today on everything. When it was too crazy I’d always go and talk to John. He's been hugely influential not only on me as a person but Camden as an employment place because he's such a great leader - the way he works with his teams and how he talks to people.’

Hegarty’s also the creative brains behind the company’s first TV ad campaign, which debuted last month. Cuppaidge describe the film as an ‘ode to Camden.’

‘The area defines us. It's open and accessible to all. You can be a lawyer or a goth or a punk, white, black, everything in between, you're all accepted in Camden and that's what we are as a brand.’

The company has grown around 30% since the ABI deal and is on a hiring spree – a challenge for a boss used to working with a small team. ‘The whole company used to sit up here,’ he says, gesturing to the cramped mezzanine we’re sitting on above the brewery bar. ‘There was 15 of us and it was very easy to understand how everyone was talking, walking, feeling, contributing. Now we're over 100 I don't get to do that.’ 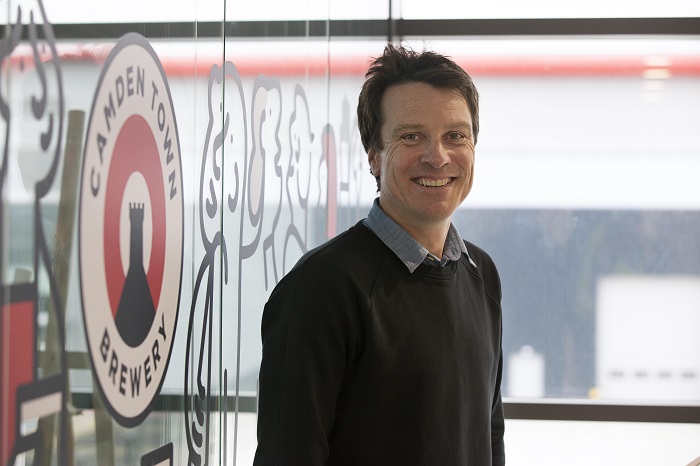 He may have made a handsome sum from selling up but Cuppaidge still lives in the same house around the corner and insists his lifestyle hasn’t changed ‘one bit. I had a nice holiday
but apart from that it's just business as usual.’

He does his best to balance work and personal time. ‘It's pretty basic, I used to work on farms and at the end of the day you'd have a beer and you were done,’ he says. ‘I don't drink during the day, only at night, and once I've had a beer I don't look at an email or do any work.’

Without equity in the business, Cuppaidge will remain in the top job as long as ABI wants him to. He doesn’t seem keen to step back voluntarily any time soon.

‘I don't know what I would do outside of this business, I'm not good to anyone else, I'm only good here. If it goes the same way it's going, as long as they want me I'll be right here every day early in the morning and leaving late.

‘I'm always trying to perfect things. For me Camden is a long journey of making things incredible - better experience for hiring, better experience for staff, better customer journey, better beer. There are so many challenging aspects of this job and until they're all completed I'll continue to come in and annoy everyone.’