Just when you think Greece has exhausted its supply of shock and awe, the devastated southern European economy plumbs new depths. The Athens Stock Exchange reopened today after five weeks and duly plunged a record 23%, although it had recovered (if that’s the right word) to a mere 18.6% drop in mid-morning trading.

Its capital-starved banks, battered after three weeks of capital controls in June and July, took the biggest hit, sinking as much as 30%. Reports over the weekend estimated the sector will need an injection of anything from €10bn (£7bn) to as much as €25bn to stop the bad loans bloodbath.

The stock market falling off a cliff isn’t exactly unexpected – the flow of bad news out of Athens has been pretty much unrelenting since it shuttered. But it’s nonetheless yet another reason to think, ‘How in Hades’ name is this country ever going to get back on its feet?’

And the bad news was compounded today by an index showing manufacturing activity shrinking on an unprecedented scale. Markit’s Manufacturing Purchasing Managers’ Index (PMI), which is based on a survey of factory managers, registered 30.2, far below the previous record low (where anything above 50 indicates expansion and below shows contraction). 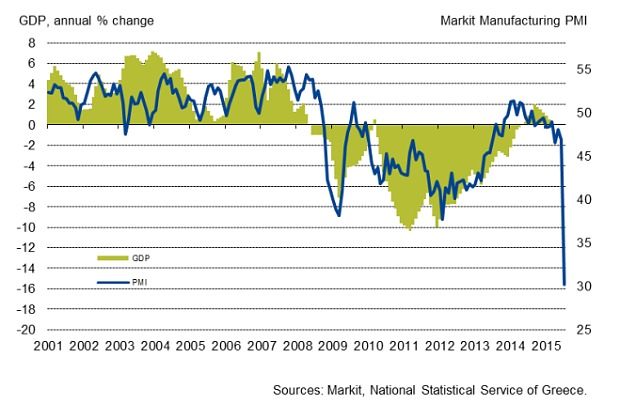 As Markit economist Phil Smith put it, ‘Although manufacturing represents only a small proportion of Greece’s total productive output, the sheer magnitude of the downturn sends a worrying signal for the health of the economy as a whole.’

Greece’s creditors are no doubt already aware the magnitude of the task ahead of them, with the contentious issues of pension reforms and privatisation being discussed this week. What it really needs, of course, is a short back ‘n’ sides debt haircut. On that front, Prime minister Alexis Tsipras will be hoping the IMF’s threats are more effective than his own.