We all need one, and collectively Brits spend about £1bn a year on them, but in the hierarchy of domestic purchases a new mattress can't compete in the excitement stakes with a new phone, or a swanky new laptop.

But US start-up Casper is trying to change all that, using slick systems, lots of hi-tech research and a decidedly silicon valley aesthetic to inject a bit of glamour into the prosaic business of bagging yourself a new bed.

Sorry, make that acquiring a new ‘sleep surface’. Yes, that really is what they call it. ‘It’s far and away the best sleep surface out there’ says co-founder and COO Neil Parikh, unabashedly, before going on to explain in impressively geeky detail exactly what it is about Casper’s offering that makes it different. ‘We’re obsessively interested in every part of the process. We invested in more than 200 prototypes and a/b tested them. We design the cotton fabrics that go into the mattress cover, and we design the cut and sew patterns. 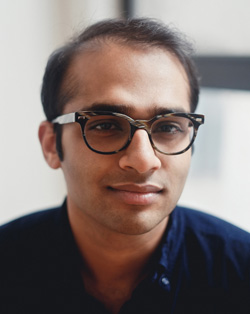 ‘We don’t just spray fire retardants [onto the foam mattress] like everyone else, we actually redesigned the chemistry of the foam so that you don’t need them.’

Set up (or should that be laid down) in New York in April 2014, Casper had raised $1.85m in VC funding (including a contribution from model and TV star Ashton Kutcher) before it had sold a single mattress. It famously did $1m worth of business in its first 28 days, $100m in its first full year (2015) and is on track to do $200m this year. It claims to have been profitable from the moment it made its first sale.

Now it has come to the UK, with a bespoke UK supply chain (‘we visited 62 factories in the UK to find the right people who could make it for us here’) and a slick website, fronted by a hip and cutesy pop-up shop in London’s Covent Garden where I meet Parikh and fellow co-founder Constantin Eis, global MD and the man tasked with rolling out the UK end.

It’s not just the cover or the foam that is special either, it’s the whole experience enthuses Parikh, a former medical student with two NASA robotics patents and a designer bacterium to his name.  (Another co-founder - there are six altogether - Jeff Chapin is an ex-IDEO product designer who has worked for the likes of the World Bank and The Gates Foundation. With all that brain power it had better be good).

Like every good tech company, the IP (the product and service design) is kept in house whilst the manufacturing is outsourced, but always domestically - so Brit market mattresses are made here, US ones in the States. The whole offering is topped out with the kind of Millennial-friendly marketing jamboree that regular bedding stores can only dream of.

Sitting snugly atop a Casper mattress in a tent-like ‘nap room’ (you can book it online if you fancy popping up west for a snooze) the three explain their product’s appeal. The real wow mattress moment comes when it is delivered – between 5pm-7pm the next day, provided you order before 3pm. They arrive rolled up tight in a box not much bigger than the one a double duvet comes in, small enough for one person to pick up and carry on their own. 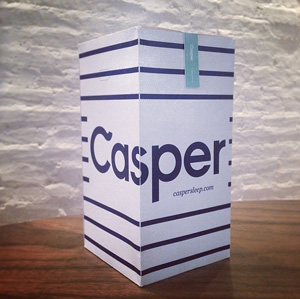 Videos of ‘unboxing’, featuring the three-layer foam mattress expanding almost miraculously to full size, are regular hits on YouTube. There are even ones of (usually doomed) attempts to do it in reverse. Like the Genie, it is not keen on returning to its original confinement, although doubtless many old-school rivals wish that it would.

It’s all part of making the purchase as fun-packed – and pain free – as possible, and of meeting the needs of their young digital native customers who want to be engaged with and consulted, rather than pitched at by a sharky sales guy.

Savvy social media plus low-key advertising on public transport are its marketing MO. But that is just the beginning. ‘We don’t think that interaction with our customers ends when we sell them a mattress, we think that that’s when it begins’ say Eis, the former CEO of German online retailer Home 24.

Take the Covent Garden pop up showroom, for example – it’s less about selling than it is about informing. ‘It’s a touch point, we want people to hang out here – have a coffee, bring their friends. We want t know what they like and they don’t like, it’s nit just about selling mattresses.’

In essence the Casper pitch is pretty simple –take everything about how mattresses have traditionally been sold and marketed, and do the exact opposite. So instead of multiple brands and types in a regular bricks’n’mortar store, Casper is online only and every mattress from a £350 single to a £700 super king size is the same construction and firmness.

‘Multiple models is a marketing construct. If you have lots to choose from you are more likely to buy one’ says Parikh. But their extensive RnD (yes that again) says it doesn’t help people get the best result. ‘The first question you are asked in a regular mattress store is "What’s your budget?" You will not be sold the mattress that is best for your sleep needs but the one that you can afford".

Reviews – always unfiltered, insists Eis – on their website suggest that the one-size-fits-all approach works for most, if not quite all, punters. But if you don’t like it, sending it back is equally painless. Casper’s mattresses also come with a 100 day no quibble return guarantee. 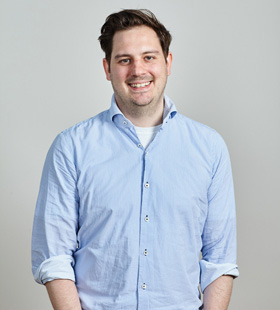 'You email us and we send a couple of guys to pick it up. You’re refunded instantly. That’s it’. But offering such generous terms is not as crazy as it seems – any new mattress will feel odd for the first few nights, but only a really uncomfortable one will still be causing problems after a week or two.

Of course Casper isn’t the only ‘bed in a box’ business around – you may also have seen ads from rivals like Simba and Eve, and Ikea sells a similar (if admittedly not as luxurious) product for the usual knock-down price. But it is the most established and the best funded  - it’s raised a total of nearly $70m in 3 rounds and backers now include the likes of Tobey Maguire and Leonardo Di Caprio, adding to the hip cachet that the brand is acquiring. It’s valued at over $500m.

Responding to its customers needs, however insignificant they may seem, is also baked in to the business, says Constantin. ‘We are very customer centric. The mattress cover is a good example. Normally covers unzip at the bottom. But ours unzips at the top, because that’s the bit you sleep on so that’s the bit you want to wash’.

‘Every morning all the founders look at returns, and at negative reviews on the site. These are the ones we take really seriously – we might even invite them out to San Francisco. Not many mattress firms have a tem of 20 product designers with 50 patents between them.’

Like the impressive horsepower of it’s management team, that kind of RnD resource can seem a bit OTT for a firm which is after all making a pretty quotidian product. Albeit doing so with a forensic level of attention to detail and a techie’s zeal for problem solving.

But that’s because if all goes according to plan, Casper will rapidly become about much more than mattresses. It has already branched out into sheets and pillows (characteristically the sheets are optimised for breathability and the pillow is a unique dual density design) but thanks to the wellness revolution there is much more to come. 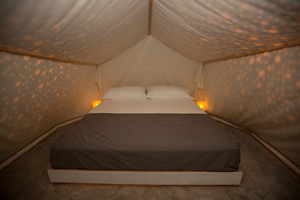 Their ambition is to become an ‘holistic sleep partner’ an ambiguous phrase but one which will presumably allow them to port their super-detailed, customer focussed approach to a range of other products and services aimed at tackling what has been called ‘the sleeplessness epidemic’. Ironically caused (at least in part) by people spending too much time on their phones and tablets and not enough widing down properly before they go to bed.

‘The bigger opportunity is that lots more people now care about their sleep, but if you want really high quality stuff that’s been designed for sleep and not for fashion there’s not many places you can go’ says Parikh. ‘There’s no Nike of sleep, and that’s why we got into it.’

Watch this space, or maybe catch some z’s in the nap room. You never know what might have happened when you wake up.

How Amazon does data

In this mini-extract from our intelligence report A Leader’s Guide to Data Science, we look...

Some ideas from our panel of C-suite leaders.

While I have done a day’s training in first aid, I am not a paramedic....