The whole brouhaha had generated sales of $17.7bn or 120.7bn RMB when the virtual tills closed at midnight local time on the 12th. A lot of money by any reckoning, but somewhat short of the $20bn rumour that had been doing the rounds. But then the RMB (like a few other currencies we could mention) isn't what it was this time last year.

The TV show – an amped-up hybrid of It’s a Knockout and The Generation Game, as produced by The Shopping Channel – is, like pretty much everything done by Alibaba, an enthusiastic and unashamed attempt to persuade it’s 400m active consumers to buy, buy, buy.

Teams of fans sit in supermarket trolleys collecting points on their smartphones, Pokemon Go style. The winners – and their supporters in the audience – receive prizes and discounts to use on TMall and Taobao, Alibaba’s ubiquitous shopping apps (Taobao is the street market, TMall the upmarket shoping centre). Bizarre sets featuring man-size babies and matchmaking angels, and performances by Chines popsters leaven the mix. Like the dress she's wearing? You can buy it online, now. 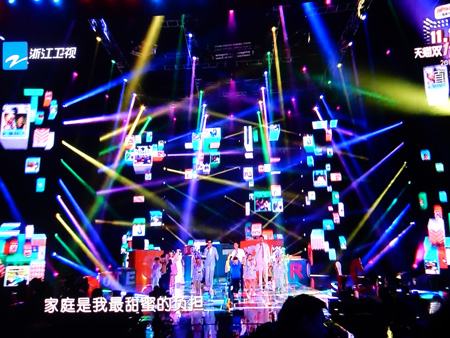 11.11 began with a few Chinese students of the single child generation buying themselves presents online on 11/11 (all those ones). Picked up and run with by Alibaba’s savvy founder Jack Ma, in eight years it’s become a 21st Century Chinese cultural phenomenon, a major event in a country where shopping is elevated almost to the level of a sport.

Despite the high-energy variety-show vibe the intent is deadly serious. Beating last year’s sales total is a career requirement for the Aliren (Ali-people), as employees are known.  In 2015 that was $14.3bn (91.2bn RMB), so this year has seen a 32% rise in Gross Merchant Value (GMV). Pretty substantial but as the event gets bigger percentage growth gets harder to maintain. GMV growth from 2014-2015 was 40%.

But it's not (quite) all about the numbers. Singles Day is also a very public way for the increasingly confident and capable Alibaba to showcase its abilities and ambitions. Neither are insignificant. ‘The future of retail is in China, it’s not anywhere else, and it’s happening now’ said Alibaba’s co-founder and executive vice-chairman Joe Tsai in his introductory briefing to the night.

The buying begins at midnight on the dot, although ‘pre-loading’ by shoppers to ensure that they get their maximum discounts is encouraged. The numbers generated are staggering, as is the volume and depth of customer info. This really is Big Data.

It takes moments to breach the $1m mark. Within an hour $5.2bn worth of goods – everything from fashion to soap, trainers to mobiles – has been bought by customers who are still mostly in China but increasingly to be found in other global markets too; 85% of the sales are made via mobile phone.

The SEC has taken an interest in exactly how these numbers are generated (this year they will be audited by PWC, but by the time they've finished the carvan will have moved on). But even so it’s safe to say that 11.11 is very big, indeed. Alibaba bills it as the world’s largest shopping event, and it’s enough to make Black Friday and Cybermonday look like minnows. The numbers flash up on a massive data wall so there's no danger of forgetting what it's all about. 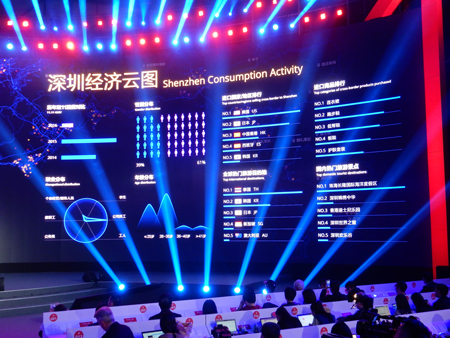 And that’s where the global bit comes in – having started out as a platform for Chinese SMEs to trade with domestic customers, Alibaba has in recent years been busily signing up the big international brands, pitching itself as the painless and trustworthy route into the notoriously tricky Chinese market. So from the UK there’s Burberry, Mini, Dyson even M&S and Sainsbury’s.

New customers will largely come from SE Asia and India, says Michael Evans, former Goldman Sachs partner tasked by Alibaba with globalising the business.  But when it comes to the brands which will be sold to them ‘Europe is absolutely a critical piece for Alibaba’.

It has already beaten off eBay’s attempts to get into China, and there is now an unofficial competition underway between Alibaba and Amazon to be the first to hit the 2bn cross-border customers mark. Iternational brands enjoyed sales growth of 47% this year compared to last.

In many ways it's Alibaba's back end that is the most impressive part of the proceedings. It's Alipay 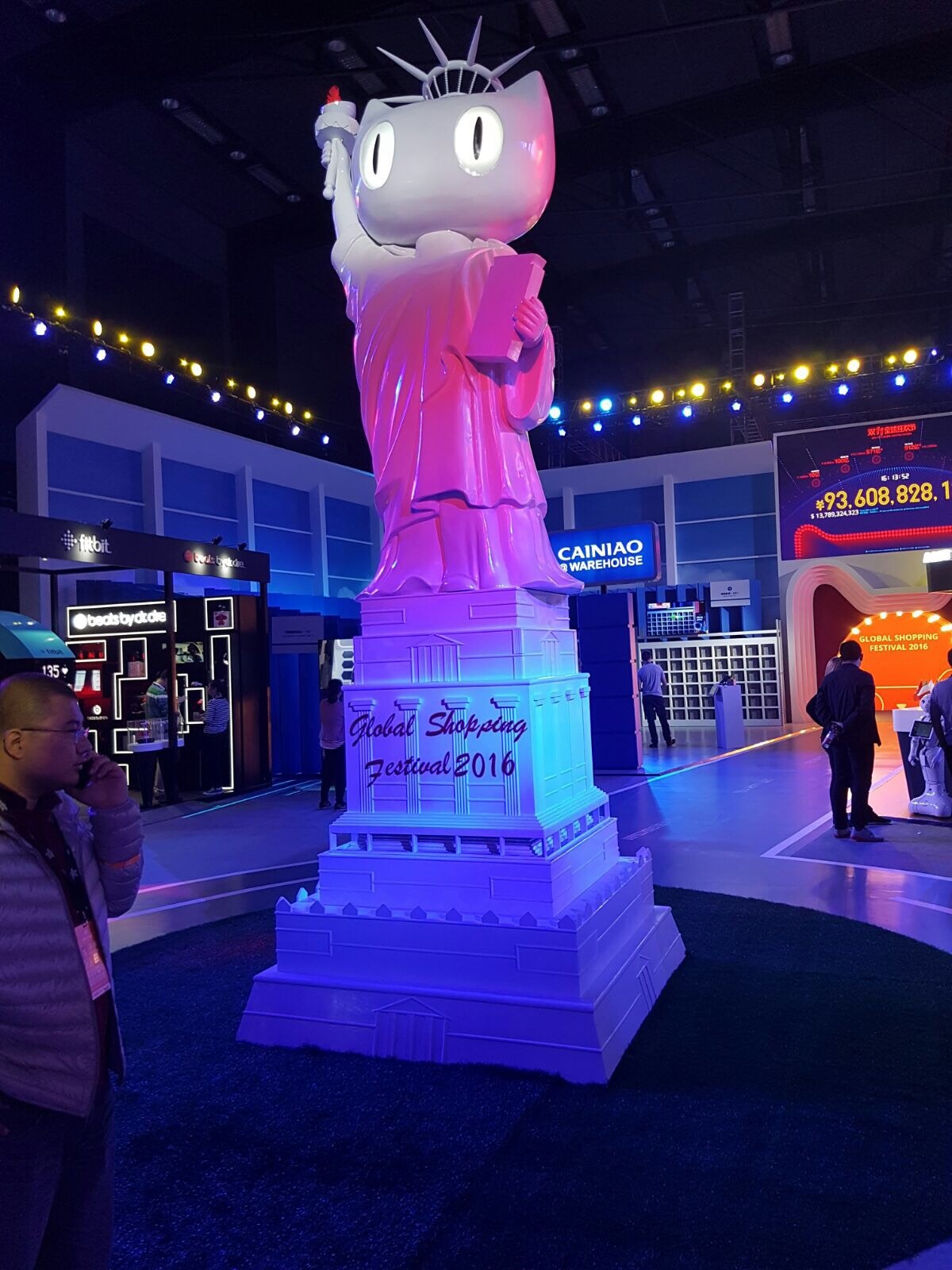 payment systems handles hundreds of thousands of payments a second at 11.11's peak. It's army of Cainiao couriers help it deliver over 500m parcels in just a day or two. Those are numbers that no other e-commerce platform in the world can match.

Back in the TV studios, in the sports stadium of the University of Schezhen, Posh and Becks shuffle off having plugged his new Whisky launch and her designer frocks and sunglasses, and answered a few pat questions about the pressures of their jet-set lifestyle. ‘It’s all about the family’ blurts Becks.

Later Founder Jack Ma takes the stage to show his latest card tricks to no less a 'sleb than Scarlett Johansson. He’s a massive star here in his own right, a charismatic folk hero to the millions of one-man band Chinese entrepreneurs who rely on Alibaba’s trading platforms for their living.

If he is disappointed that headline act Katy Perry pulled out at the last minute he’s not showing it. The show must go on, and this is shopping as entertainment, billed as Silicon Valley meets Hollywood.

Perhaps more worrying to the firm’s plans is the result of the US election earlier this week. An America First trade policy under Trump could put a serious crimp in those global expansion ambitions.

Tsai is matter of fact on the risks for all involved. ‘When you become president of a country you have a responsibility to look out for the interests of that country. The best solution for the US is to engage with the world. If it disengages that will disappoint a lot of people who look to the US for leadership.’

He also adds a veiled warning on the shape of international relations to come. ‘China is a smaller economy than the US but it is growing faster. China generates $700bn wealth creation annually, the US $200bn. So China is going to be the source of US demand and US capital. China/US relations will define our century.’

So if you want to save the world, keep shopping…