Way back in 1997 when Tony Blair arrived in Downing St with his growing brood in the Ford Galaxy you could have been forgiven for thinking that class politics was dead and buried in the UK. New Labour strove to rid itself of Marxist labels and rebrand the proletariat and the bourgeoisie. It had to do so to get into power. But its recent denials of deep us-and-them class divisions may have alienated more voters than it has won.

During the boom years all those middle earners did not do that well and since the bust things have been hard: they’ve lost tax credits like child benefit, they fear for their jobs, their kid’s university places cost a fortune and when the offspring leave college low-paid internships appear to be all that’s available.

And forget about getting on the housing ladder: a fall back in class status from generation to generation now looks like a real possibility. Up at the higher end of the scale boardroom pay and bankers' bonuses seem ever more outrageous. The ratio between the lowest and highest paid in UK business is now at an all-time high of 180.

However, trying to find ‘the working class’ has become very difficult in a country where almost 70% own their own homes and a majority are in white-collar work. But, make no mistake, class is still there and, bizarrely, the party who appears to understand and be able to exploit it is UKIP. They know how to work resentment and anxiety. They are master manipulators of the Age of Rage.

Two events this week remind us of the continuing rawness of the divisions caused by class in the UK. Firstly, we have the rumpus caused by the pair of latter-day Basil Fawltys who run that hotel in Blackpool where after a poor review on tripAdvisor they took it upon themselves to fine the guest £100. They were severely ticked off by the desperate local trading standards people for doing so. This is the last thing Blackpool needs.

The farce - enjoyed at very great length by The Daily Mail - is regarded as a great source of mirth because of what Blackpool stands for: a hapless working class relic of a place that is seriously down on its luck. Adaptation to the 21st century has been painful for Blackpool: those who used to holiday there now dream of going to Ayia Napa. And many get there.

A website like Tripadvisor is hellish news for Blackpool. The reviews of The Broadway Hotel are scathing. ‘This place needs closing down,’ says one, under the heading ‘Pure Filth Avoid’. ‘Staff drinking cans of Strongbow while serving breakfast,’ notes another. ‘Could not wait to get out of this place and get home to bath. ’ said a third from Tracy W of Derby who protested: ‘There was a pair of socks left in the draws [sic] that had actually grown mould on them.’ A photograph of the offending socks was attached.

The second despatch from the class war front comes from Rochester. Here we have the extraordinary events of last night where Emily Thornberry the Labour MP for Islington South and shadow attorney general lost her job after Tweeting a shot of a house in Rochester taken during the by election. 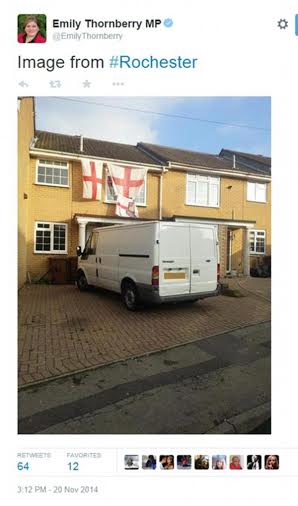 The first thing to say is that it’s not a bad snap. It’s bald, evocative and speaks a thousand words - most of which may have been better left unsaid. It says - ‘This is what we’re up against here. The way things are, guys like this are never going to vote Labour.’  It reminded me of some of the work of the renowned Magnum snapper Martin Parr who has made a good living over the years taking arch pictures of people he would never call ‘plebs’ at play.

His is not a warm, affectionate eye and Thornberry’s gaze through her iPhone is equally knowing, detached and metropolitan. She is as much amused by the mock classical columns at the front of the semi as the white van, the flags of St George covering the windows and the West Ham flag.

I may be a West Ham fan, but besides Millwall the Hammers are the least bourgeois team in the capital. As a child, when Trevor Brooking once made a majestic run from the back passing several players, I heard a fan shout, ‘What nonchalance, Trevor! What nonchalance! ‘Except he pronounced it ‘Non-Kall-ance.’

Should I resign as a vile, snobbish class warrior because I found that sneerily amusing and because I’m telling you? I’m a journalist and make observations, as did that greatest of journalists Dickens with his Mrs Malaprop. But politicians are not allowed to do so. Especially when they hail from Islington, home - in the old days when they could afford them - of many a Guardian journalist.

Anyway… Dan Ware, who lives in the property caught up in this furore told the Sun: ‘I've not got a clue who she is - but she's a snob. We put the flags up for the World Cup and will continue to fly them.’ He then added, ‘I can't even remember when I last voted.’ Here’s a shot of Mr Ware which Ms Thornberry did not Tweet.

Anyway, in the current hideous recrimination-filled atmosphere that was the end of Emily, despite the fact that she was brought up on a council estate - which her party leader certainly wasn’t. Even those Tories who knew her said she was a jolly good egg. Or chap. Or something like that.

It’s all very reductive and childish indeed. If, this last week, Peter Mandelson had made his now legendary comment ‘What delicious guacamole!’ when eating a mouthful of Northern mushy peas, he would probably be hung drawn and quartered as a class traitor.

Meanwhile, Labour’s vote in the Rochester by-election collapsed and many ex-voters will be sitting down to a session of Downton Abbey on Sunday night. It’s a funny old world.

21 hours ago
Women in Business