Think of the word ‘innovation’ these days and the mind may leap to disruptive online brands like Airbnb or Spotify, and the impact they’ve had in shaking up the worlds of hospitality and music. The message from their success is that if you think things are good enough as they are, you’re wrong: the next innovation is always just around the corner.

The automotive industry is no different. Ever since its birth early in the 20th century it has been driven by the constant arrival of new methods, ideas and products – from the combustion engine to the humble seatbelt.

But the industry hasn’t exactly sat with the handbrake on in the face of modern challenges either. Take the creation of the crossover vehicle, which manages to satisfy two very current, and potentially contradictory, needs – concern for the environment and the desire for high performance.

The crossover does this by taking all the practical benefits of the popular SUV and adding the superior fuel economy and handling of a passenger car. The result? Demand for crossover vehicles in the UK has increased by 198% in the last five years, and the crossover is now the fastest-growing automotive segment in the country.

Credit here goes to the designers and engineers at Nissan. When the company unveiled its Qashqai crossover car in 2007, the vehicle was unique. Of course, the pack soon followed – the crossover segment it inspired now includes the Audi Q3, the Volkswagen Tiguan and the Renault Kadjar – but the Qashqai remains the nation’s favourite scooping the What Car? prize for best small SUV for the past two years.

But like all true innovators, Nissan hasn’t simply let its engine tick over. Instead it cemented its segment-leading position with the release of the Juke in 2010, a sporty, compact crossover. The Juke is now the brand’s second bestselling model after the Qashqai, it too becoming a favourite with both individual drivers and businesses, and was rewarded with a makeover last year. At the same time, Nissan opted to release its latest X-Trail model, available with five and seven seats. And this year’s Frankfurt Motor Show saw the debut of the X-Trail’s new petrol engine option, along with the welcome news that the next-generation Juke would be built here in the UK.

As if that wasn’t enough, Nissan has also become the global leader in electric vehicles, with the success of the pioneering LEAF, a 100% electric five-seater hatchback, and the e-NV200, a 100% electric van. The company’s guiding mantra is ‘Innovation that Excites’.

With a raft of groundbreaking features going into all its vehicles, Nissan has made a strong claim for a place among the industry’s great pioneers. Its innovative spirit clearly has a lot of mileage in it yet.

Nissan, the next generation

Nissan used this year’s Frankfurt Motor Show to reveal a new concept car, which boldly goes where no crossover has gone before. The Nissan Gripz  takes the compact crossover and injects the excitement and performance of a sports car. Conceived by designers in Europe and Japan, its EV technology and raised sleek body hint at where the crossover pack may head next. Its dual personality means it can handle the day-to-day commute but also deliver a kick at the weekend. The future is not only electric, it’s fast and versatile too.

Made in Britain: Nissan Sunderland Plant 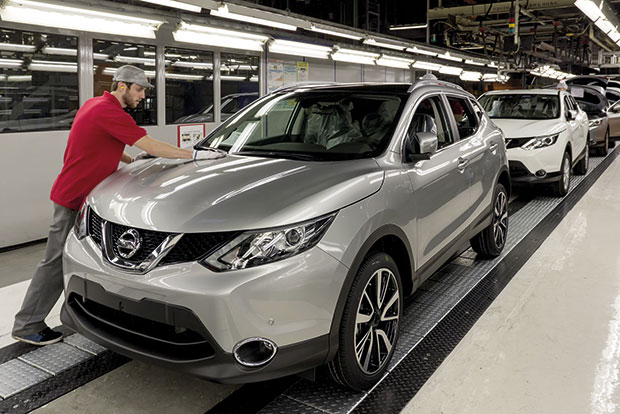 • The Nissan Qashqai is built in Sunderland. Over 500,000 were produced at the plant in the past 21 months, making it Britain’s fastest car to reach the 500,000 production milestone.

• Nissan has invested £100 million to build the new- generation Juke there too, guaranteeing 6,700 jobs at the plant and supporting 27,000 positions in the supply chain.

• The Sunderland plant  also produces the 100%  electric Nissan LEAF. It has been producing lithium-ion batteries for electric vehicles since 2012.

The innovative features offered by Nissan models make them the perfect choice for company fleets.

Nissan crossovers boast responsive engines fitted with Stop/Start technology to avoid wasteful idling, so you get the kind of fuel efficiency you’d expect of a supermini. CO2 emissions are as low as 99g/km with the Qashqai (or zero with Nissan’s EV range). The result: a compelling Total Cost of Ownership.

Crossovers boast vast capacity, and are versatile with luggage. They also comfortably fit five adults: an undeniable benefit for business.