As the two contenders in this extraordinary US election wearily approach the finish line perhaps it is time to reflect on the choice faced by the voters – and the insights we can take away in terms of our understanding of leadership.

Much has been made of the ‘authenticity’ of the respective candidates – because we live in times where, more than ever, we don’t trust leaders. And it’s not just political leaders – think of the apparently endless scandals that seem to consume leaders in business, public sector organisations, charities, sport and so on.

As a result we have become obsessed with ‘authentic’ leaders. The most recent email investigations are symptomatic of an underlying preoccupation with whether either candidate can be fully believed.  This is not an uncommon obsession when we assess politicians – but it has reached almost feverish levels with Clinton and Trump.

So how do you achieve authenticity? The popular rallying cry is to ‘be yourself’. Our view is that this is just about the most naïve, simplistic advice that you could possibly receive!  Who needs business schools, expensive training programmes or leadership experts? Just be yourself – then we can all become leaders! It’s really not difficult to understand how this can be the fast route to disaster – or derailment to use the jargon.

The truth is that authenticity is a necessary but insufficient condition for leadership. In fact, effective leadership is about authenticity and skill. As we have repeatedly advised: "be yourself – more – with skill". This acknowledges the messy reality that leadership takes place in particular contexts and with others – you can’t be a leader without followers! That means adaption and compromise so that you can connect with others, adjust to context - and yet still invest yourself in the leadership role. A delicate balancing act indeed.

To illustrate this dynamic we use a simple matrix which we use to ask people where they think they are, where they want to get to and what they need to work on to be there. 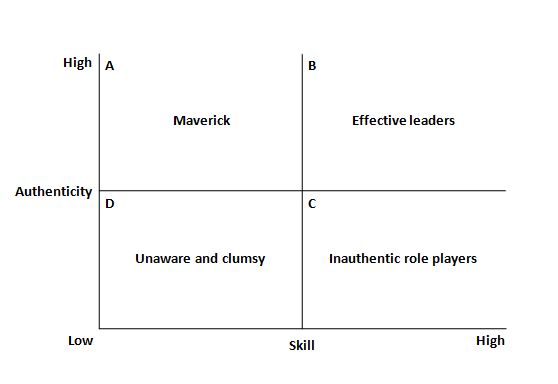 In box B skill and authenticity combine to produce leadership. But where are Hillary and Donald?

The popular perception is that Trump is all self and no skill – a maverick (box A). Like many entrepreneurs, Trump has had the apparent luxury of saying, in effect, ‘this is me, take it or leave it’. If you don’t like it, ‘you’re fired’. That’s the privilege of those who own their organisations. But how this approach translates to the democratic politics is problematic.

By contrast, Clinton is perceived as all skill and no self – an inauthentic role player (box C). She is regarded as the archetypal Washington insider, slick and well briefed, too often changing position and hard to read as a person. She gives others a feeling they are being worked or manipulated. She struggles to convey the humanity that characterises effective leaders.

Hence – for many – the choice from hell.

But perhaps - as Clinton begins to establish something of a lead in the polls – Trump is closer to her than we previously thought. He too can be seen as inauthentic – sometimes with skill. He has deliberately developed a persona, for example, that seems to connect powerfully with a significant part of the middle America electorate that feel they are forgotten.  Yet it rests upon a character projection that seems hard to square with the reality, for example, of a multi-billionaire who has described tax avoidance as ‘smart’. Since deciding to run for office his position on several issues seems to have switched – not least his attitude towards Clinton herself, who he said would make a ‘good president’ when she was in the running in the 2008 primaries.

Perhaps more damaging though is a sense that his inauthenticity is combined with a lack of skill (box D).  We label this box "unaware and clumsy". We often think about the fictional but legendary David Brent in The Office as an example. But these words  seem to accurately sum up Trump’s reaction to recent "locker room" exposes.

So where next? We strongly doubt – at this late stage in the campaign, and in her own life - that Clinton will ever be seen as authentic by a significant part of the US electorate. But perhaps she is beginning to benefit from a sense that Trump is neither skilful nor authentic.

No-one in business wants to look like David Brent. In our consulting work we warn individuals in box D that the road to effective leadership will be long and hard. They may even wish to consider alternative careers. But perhaps the most worrying prospect is that a deeply disillusioned US electorate will – in a huge act of defiance – take the Trump option. They don’t care about his failings; he is simply not Clinton.

How to communicate changes to customers

The failed launch of the European Super League serves as a reminder in the importance...