How do you change a reputation for brawling, boozing and bingeing? The night-time industry is trying to scrub off its seedy sheen by highlighting its contribution to the UK and claiming it isn’t to blame for irresponsible drinking.

Pubs, bars, clubs and restaurants are worth £66bn to the British economy, or 6% of GDP, according a report produced by sector body the Night Time Industries Association (NTIA) (we’d never have guessed). They also employ around 1.3 million people.

The report was launched a day after Transport for London unveiled its night tube map, claiming a 24-hour Underground will support 2,000 jobs (to put that in context, unions have claimed closing ticket offices has cost 900 roles) and contribute £360m to the UK economy. Whatever the figures, the prospect has many a Londoner with bad memories of spending hours on night buses or forking out far too much on a cab or Uber. 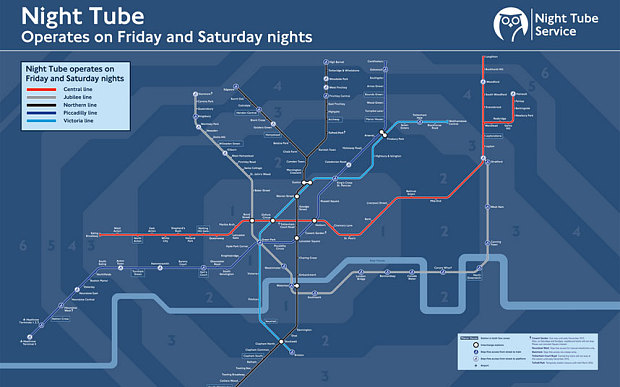 A map for all you 24-hour party people/night shift workers/very early risers.

The NTIA also argued night-time businesses have actually helped cut alcohol abuse and related crime, rather than fuelling it. ‘Venues are now safer than ever and most bars and pubs are careful to ensure that their customers enjoy a safe evening out,’ it said (but of course).

It then took aim at the powers that be. ‘The attempt to extend regulation of the night-time economy or curb its activities will do very little to reduce the problem of alcoholism or violent crime. Most alcohol is consumed outside licensed pubs and bars.’

Rising alcohol duty and setting aside areas of England and Wales where no new licences will be granted were particular bugbears. The NTIA also called for crimes usually committed at night to be reclassified, to show they weren’t committed by venues, but ‘against them’.

It’s a valiant effort by the lobbying group, which was founded by Alan Miller in April, after his Brick Lane-based Vibe bar was shut down last year following a licensing row. No doubt the independent venue and festival operators the NTIA represents do contribute a huge amount to the economy that is probably overlooked.

But until the UK gets a better grip on binge drinking, pubs, bars and clubs will remain an easy target for politicians fishing for voters from older people worried about booze-soaked ‘Broken Britain’.

15 hours ago
Food for thought