Like many children of the 1960s, Amazon founder Jeff Bezos wanted to be an astronaut when he grew up. Like almost all of those children, he ended up doing something entirely different. The fortune Bezos made at Amazon, however, has given him the means to revive that childhood dream, and he’s been labouring on it for 15 years.

Bezos founded Blue Origin in 2000 with the goal of realising commercially viable space travel. After a couple of low altitude test flights and an aborted 2011 launch that reached only 14km (a 747 reaches 10km), the company sent its New Shepard rocket 93.6km above the Earth on Wednesday.

Given that space is generally accepted to start at 100km, that’s pretty impressive. But the real goal of course is not to build a vehicle that can reach space – that happens all the time – but to build one that comes back again to be reused, rocket and all.

Paying for a rocket that gets destroyed after a single use is prohibitively expensive – space shuttle launches, for instance, used to cost between $450m and $1.5bn in 2011 prices (£300m to £1bn). A system using reusable rockets and capsules could bring the costs down ten or a hundred fold, which opens up the door to space tourism.

Bezos has been in competition with fellow billionaires Elon Musk and Richard Branson among others for this market. Branson’s Virgin Galactic is pursuing an aerial-launch approach (a rocket plane is strapped under another plane to reach an altitude from which it can escape by itself), while Musk’s SpaceX uses a ground-launch route similar to Blue Origin (a rocket takes a space capsule to escape altitudes and velocity, and they both subsequently land safely). 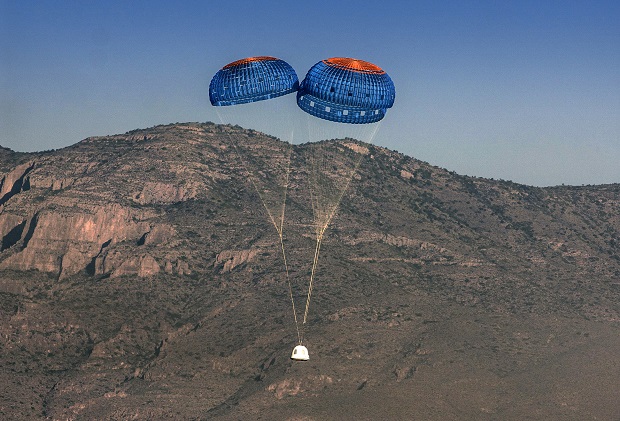 The other two have been in the headlines more than secretive Blue Origin, but that’s not always a bad thing. Virgin Galactic suffered the first fatalities in testing last year when its air-launched rocket plane SpaceShipTwo exploded. Musk’s SpaceX regularly releases footage of its programme, the last of which showed a rocket trying and failing to land on an unmanned ship (it was more of an impact than a landing).

Blue Origin’s test on Wednesday was similarly a partial success. The unmanned capsule landed safely, slowed by its parachutes. ‘Any astronauts on board would have had a very nice journey into space and a smooth return,’ Bezos said in a blog post.

The rocket itself was destroyed due to a problem with its hydraulic system, but Bezos remained upbeat. The firm has been working on improving the hydraulic system, and is in the process of building more rockets and designing a far larger version. ‘Can’t wait to fly again,’ he said. ‘Gradatim Ferociter! [step by step, ferociously!]’

Quite. The engineering problems of reusable space travel are probably surmountable. It seems unlikely that so many successful businessmen – alongside major aerospace firms like Boeing – would keep throwing money at it if it were a pipe dream.

The problem is perhaps not really an engineering one.  When Howard Hughes built his giant ‘Spruce Goose’ cargo plane in the 40s, he thought it would revolutionise aviation. It didn’t, not because it wasn’t feasible (a bigger plane has since been built and successfully operated –the Soviet Antonov-225) but because there wasn’t sufficient commercial need for it.

Bezos, Musk and Branson seem to be in a race to be the Howard Hughes of space. Yes, being an astronaut is cool (see Blue Origin’s sales pitch – prices and dates yet to be revealed) but how many people will do it, and how many times will they come back for more at what will still presumably be a very steep price?

The problem with space is there’s nothing there. There’s no destination, just a journey (Musk has a destination, Mars, that's -63 degrees Celsius and doesn't have any oxygen - not likely to rival Tuscany any time soon). Space flight as a means of getting across the world faster is different, and that may in time become a big business. But space tourism, for all the attention it grabs, probably won’t.

Of course, that doesn't mean it can't be viable. The point is to make something that would only otherwise be available only to the very rich possible for the masses (well, the 'ordinary rich'). There's money to be had there, but don't expect a trip into orbit to become normal any time soon.