Back in May 2018, our email inboxes lit up with messages from companies we’d long forgotten about. As the GDPR regulations came into force, we were inundated with pleas to allow them to keep in touch, to stay on their newsletters, to keep hearing about their exclusive offers.

Then, the cull complete, it went quiet. Very quiet. Until the last few weeks when,  it turns out, most of those companies kept our details after all.

Except this time it’s different. The situation we’re in is, of course, far more serious than a piece of data-driven legislation. And instead of empty promises and persuasion tactics, we’ve seen a wide range of messages from all kinds of organisations, trying to balance being useful with being sincere, staying humble whilst staying in business.

It’s at times like these when those over-advertised brand promises and purposes really get tested, where actions speak louder than words. And from what we’ve seen so far, there are three areas that seem more important than any others:

1. Create clear value for customers which is relevant in their changing world

Morrisons’ brand is built around people. It’s famous for staying true to its roots as being a food maker as well as a shopkeeper. So it was no surprise that it was the first major supermarket to announce it’d pay its suppliers immediately. But as well as helping suppliers, Morrisons has recognised the main challenge its customers are facing – certainty over having food in the house – and so has rapidly launched an ‘Essentials’ box. For £30, with next day delivery, customers can have a random mix of everyday essentials delivered to their front door.

Healthy fast food chain Leon, having offered to switch its premises to mini shops, contacted customers to ask for ideas of how they could help more. And many zoos, aware of the challenges parents will be facing in the next few weeks, quickly set up online video-based education classes to help children learn more about their animals.

Bupa in Australia slightly mis-judged the mood, however, with its advert for healthcare planning playing on the ongoing toilet roll panic. 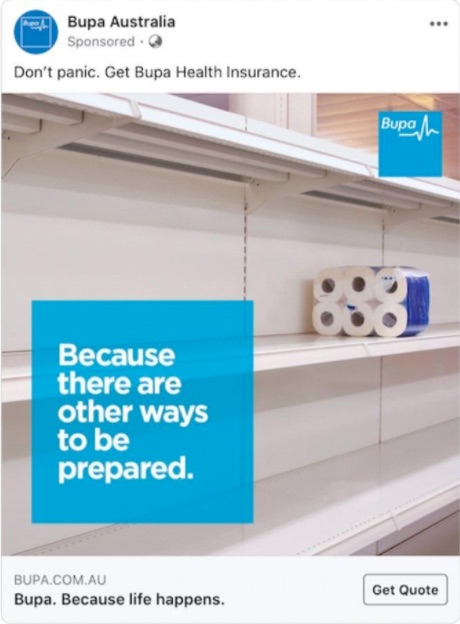 2. Do more than you must, especially if the virus increases demand for your product

As in any crisis, some companies have seen demand for their products sky-rocket. The temptation is to capitalise on this as a great opportunity to increase profits through very little effort. However, the long-term reputational impact of price-gouging would outweigh the short-term benefits, and several companies have judged this right.

BT announced it was removing usage caps on its broadband packages, whilst Virgin Media announced its mobile users would receive an extra 10GB of data to help them stay connected through this period of isolation. The National Trust opened its doors (and gardens) to everyone, for free (before being promptly told they’d have to shut them again.)

And our new favourite software, Zoom, has unsurprisingly seen an exponential growth in its usage. But rather than force everyone to sign up for a package, it removed its time limit from its free service in affected regions and gave schools free access to the full service to support distance learning.

In contrast, with sales of indoor exercise machines rising by 997 per cent, Evans Cycles decided to raise the price of indoor cycling trainers above RRP - and faced significant criticism on social media as a result.

2. Think outside-in about how your message will be received

Some organisations have judged the mood well, changing their product and experience almost instantly to fit what’s needed, now.

LVMH led the way here, altering its production process to start making hand sanitiser in response to the shortage. However, what was equally impressive was its lack of care about the branding, knowing that getting the hand sanitiser out of the door was more important than it being delivered in a luxury bottle with luxury labelling. 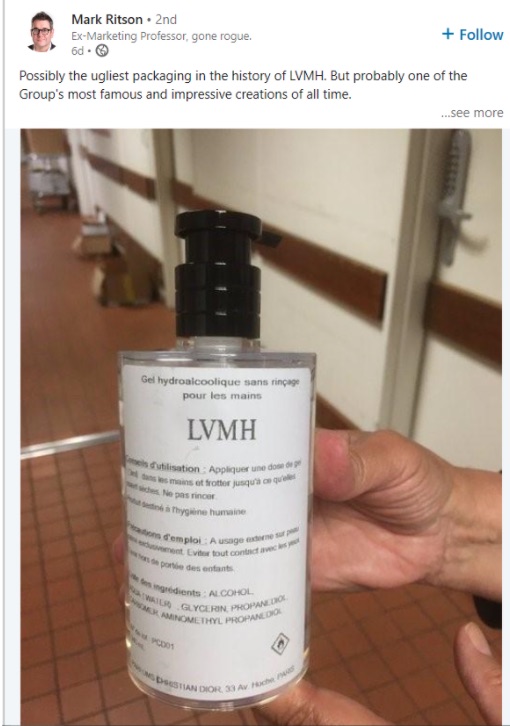 Similarly Leith Gin followed suit, whilst its national neighbours Brewdog demonstrated the fine margins in getting it right or wrong. When it announcing a branded ‘Punk Sanitiser’ product, the response from customers was overwhelmingly negative, forcing the CEO to clarify that they’d be giving it away free, not selling it, as it appeared before.

BA’s offer of a ‘BA Voucher’ for cancelled flights, rather than a full refund, has not gone down well, giving the uncertainty about the future, and people tightening their bank accounts. See also Jack’s Flights, sending an email about the virus, along with adverts for cheap flight deals.

Many CEOs are understandably worried about their own companies’ survival, along with their employees’ safety, and their own personal concerns. However now, more than ever, a genuinely human response is what’s needed, and what will stay in the memory of customers for years to come.

The final rule is an obvious one, but often forgotten: if you don’t have anything to say, don’t feel the need to say anything. But if you do, make it human - like this wonderful message from Mixtiles: 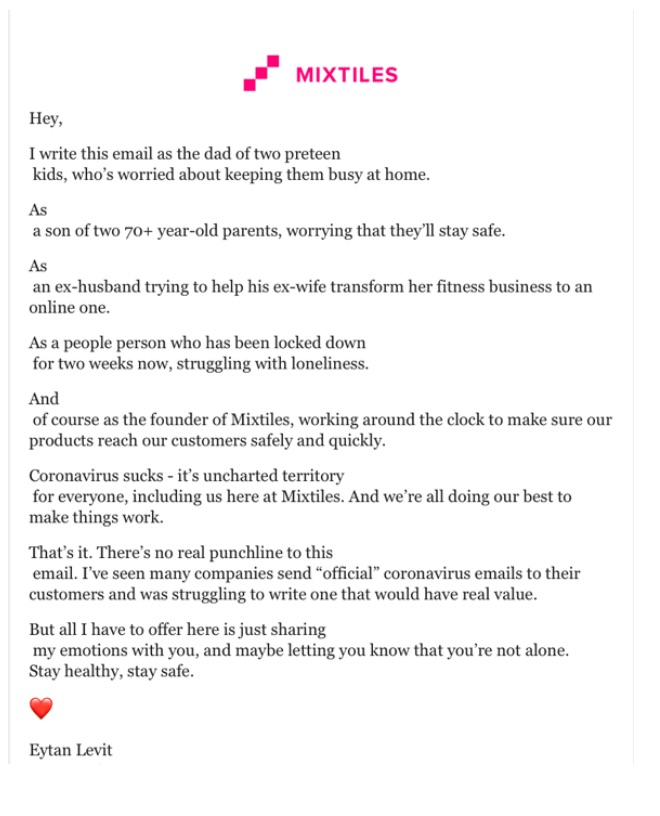 John Sills and Edmund Bradbury are managing director and consultant respectively at The Foundation. See @johnjsills or @TheFoundation on Twitter, or @cx_stories on Instagram for more customer experience insights.

COVID-19 is a chance for businesses to show some humanity