As the economy continues to play out in a minor key, it's time to take to the streets and sample life as a busker. Given the way publishing is going, it may be worth the risk of hypothermia.

Busking on the London Underground falls somewhere between The X Factor and trying to sort out a gas bill - you need to audition for a panel of staff to secure your licence, only to then have to spend hours trying to get through to the automated phone service to secure your pitch.

Rob Grundel, an Aussie in his early 30s, is my music man for this gig, and he suggests we take a purer, more spontaneous route - heading to the outdoor market at the South Bank. It's teeming with people, but there's one thing missing: buskers.

This sets my alarm jangling. The Lambeth Council website had suggested we'd be fine without a licence, but I still worry that with our first twang we'll be carted off to an internment camp for illicit entertainers, where gold-painted performers stand impressively still in the queue for slop.

Rob seems undeterred as we set up by the British Film Institute bar, connecting his keyboard and iPhone drum machine to a tiny battery-powered Roland amp. He first busked in Tasmania as an eight year-old. Airfix model kits cost $5 a pop back then, so he'd sing Beatles numbers until he'd raised enough.

'Most of busking is about personality,' he says. 'I couldn't sing, but it was cute.' I suspect the rule may not apply to me, a tone-deaf hairy bloke in his mid-30s whose repertoire is stuck on underground rap that's 20 years out of date. 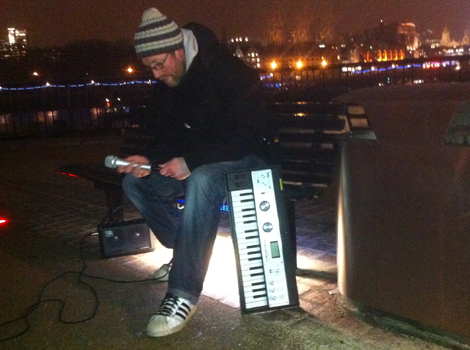 Still, with plenty of people around, oodles of natural charm and a spot in the middle of the promenade, we can't fail.

Rob props himself against the tree, his synthesizer sounds wafting across the cold night air, mingling with punters' breath vapour. I find it impossibly nerve-wracking: in a minute I'll suddenly go from being just another bloke in the street to what everyone is looking at.

Again, Rob tries his best to be reassuring. Unlike a live gig, he says, where the ticket price alone brings huge expectations, you're just making yourself part of the landscape. 'You open yourself up, and the city opens up to you,' he says.

Not with this repertoire, it doesn't. As I said, I'm no singer, so I start off with a mumbled rap of The Next Movement by The Roots, the only song I know all the way through. No one else has heard of it.

Time for plan B - rapping about people as they walk past. This is bound to get them, I think, referencing an old man's hat as he and his wife scurry past, squirming at the awkwardness of it all.

We even drop in some old-fashioned call and response: 'When I say hey, you say ho.' One guy shouts a limp 'ho' back. This feels like a triumph.

I have a thick skin for public humiliation and do feel I'm warming up, when I spot a man in a yellow bib with a walkie-talkie. Ah. I sidle over and he tells me that I can't sing. 'I know,' I reply.

He clarifies his point: that I can't sing here. 'You did brilliantly though,' he says, which is some consolation. As is someone dropping a quid in the hat as we pack up and move sheepishly away.

While he stopped short of escorting us away in cable ties, the chap did request we move down the river - which is like being sent to perform Jazzy Jeff and the Fresh Prince's Summertime at Guantanamo Bay.

We are now two lunatics standing in the dark. There's no one here. Rob's fingers are frozen stiff so he has to ditch the keyboard. We decide to go into full rap mode - abandoning musicality in favour of energy and humour, rapping back and forth over a backing track.

It's fun but no one is stopping to get involved. We're essentially entertaining the windows of an empty office.

Still, we get some feedback - from the whoops and manic smile of a man wandering the streets. When we finally give up, he drops some coins in the hat. Our total for the night is £2.01, some way short of Rob's career best of £50 in half an hour.

As we make the walk of shame down the river, we encounter a man on Hungerford Bridge belting out heartwarming jazz on a beaten-up saxophone. I envy his prominent pitch and his sound, which is a beautiful addition to the cityscape.

He tells us that he's made £20 in the past hour. We drop our earnings into his hat. That's me £1 further from affording singing lessons.

33 hours ago
Women in Business