The spectre of deflation stalking the Eurozone is casting its long shadow across the Channel, with prices in the UK growing just 0.5% in the year to December 2014, the lowest level for almost 15 years. 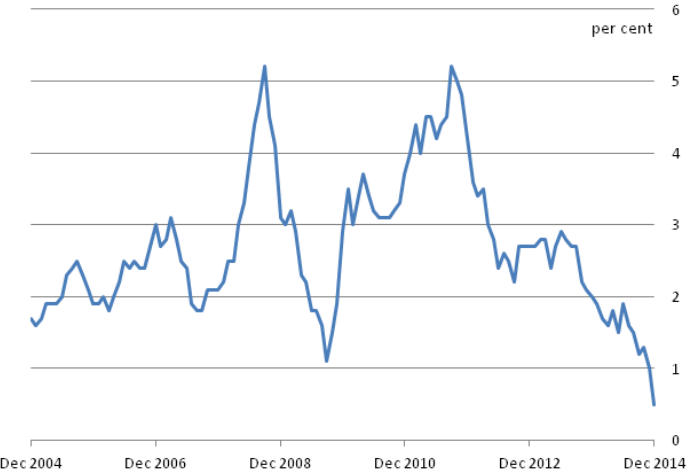 That’s half the 1% annual rate of inflation recorded in November, as the supermarket food war helped down food prices and fuel took a hit from cheaper oil. The last time inflation was this low was May 2000, and it means Bank of England governor Mark Carney has to write a letter to chancellor George Osborne, explaining why it has deviated more than 1% from the 2% target (such a chore). 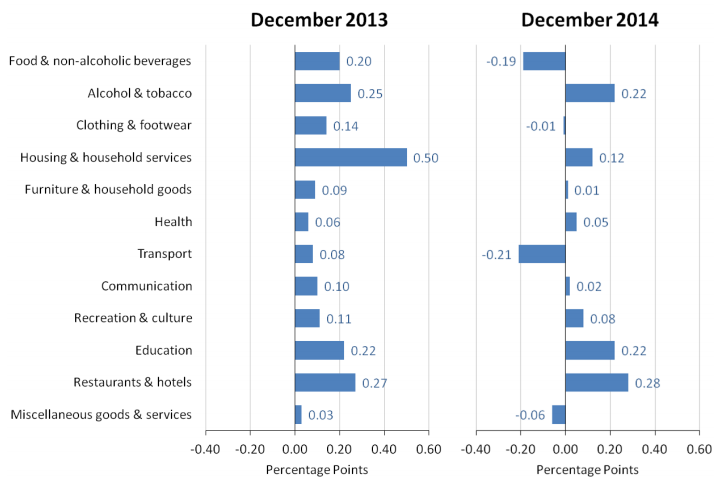 The components of inflation. Source: ONS

But while slowing price growth is indeed good news for consumers in the short term, the chancellor conveniently neglected to point out its dangers – something the markets are only too aware of. The pound fell as much as 0.5% to $1.5035 this morning (a sizable drop in the world of forex), the lowest level since July 2013. It did recover as high as $1.517 around midday, but an interest rate rise still looks further away than ever.

Meanwhile, bond yields fell as investors shifted into the supposed safe havens: the yield on a 10 year UK government bond fell as much as 1.51% to the lowest since August 2012.

What of those deflationary dangers then? Firstly, wages, which have been lagging inflation for years now, are often tied to prices, meaning this could be no more than a short-term boost.

Secondly, if inflation keeps on falling – as it may well do, what with oil prices continuing to drop – Britain could follow the Eurozone into outright deflation. And that could set off a Japanese-style deflationary spiral, as consumers and businesses hold off purchases while they wait for prices to fall further, choking off economic growth.

That risk is ‘overblown’, according to Berenberg Bank chief UK economist Rob Wood. ‘No one is likely to delay buying a television because they found it cheaper to fill up the car with petrol and the store was offering cheaper credit,’ he told the FT.

Nonetheless, if prices keep falling in the Eurozone, their ghost could be haunting us too all too soon.