Deliveroo is absolutely flying. Orders through the takeaway delivery app have jumped 500% since it landed $25m (£16m) in series B funding back in January and now it’s announced another injection of $70m, which it plans to use in a bid to conquer Asia and expand its existing operations in Britain and continental Europe.

Takeaway apps are nothing new and Deliveroo is tackling an extremely busy market dominated by the likes of Just Eat and Hungry House. But the London-based startup’s model differs quite significantly from its competitors.

Where Just Eat offers takeaways that already do deliveries the ability to ply their trade online, Deliveroo runs its own network of bicycle- and scooter-mounted delivery drivers. That has allowed it to sign up big name restaurant chains like Gourmet Burger Kitchen, Nando’s and Busaba Eathai, and even Michelin-starred Trishna – all of which didn’t offer delivery at all before.

As well as allowing it to tap into a sector of the market its competitors can’t touch, Deliveroo’s model means it can get away with charging more. It currently charges customers a £2.50 flat fee and an unspecified amount of commission, (while Just Eat charges restaurants themselves 12% per order after an initial sign up fee) and that could go up in the future, as those plumping for more upmarket food are potentially less likely to be put off by a few quid on top.

It won’t be all plain sailing though. Having to run its own fleet will present Deliveroo with logistical problems that its competitors are totally divorced from. That’s especially true of more rural areas, although the service has already rolled out in 18 towns and cities in the UK. 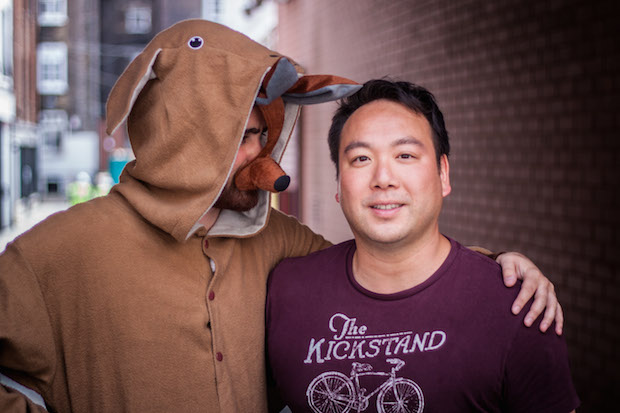 'We’ve seen huge demand for our service from customers and restaurant partners alike,' said CEO and co-founder Willian Shu, pictured above with the start-up's kangaroo mascot. 'Although we’ve grown rapidly since inception, we’re extremely excited to be entering into the next phase of our ambitious expansion strategy.'

This latest deal reportedly values Deliveroo at $315m. That’s some way off Just Eat’s current £3.05bn ($4.6bn) market cap, but MT expects those figures to be a lot closer in a couple of years’ time.

Will Google regret its tougher approach to moonshots?

The tyranny of best practice

Meet the chief behind Avon's resurgence