Matthew Gwyther, editor of Management Today: In an article for MT last year, Paul Morrell wrote that: ‘Fifty years ago, the professional classes were revered by society, but long-held restrictive practices and a reluctance to accept reforms have contributed to a gradual loss of public trust and respect. They must act to remain relevant.’ What does the word ‘professions’ mean and what are the issues facing them at the moment?

Paul Morrell, former chief construction adviser to HM Government and senior partner at Davis Langdon: There are a number of factors you need to profess before you can call yourself a profession. The first is some kind of entry standard, a recognition that someone who carries those letters has some level of education in that specialist knowledge.

The second is a continuing concern with the competence of the membership. The next is a code of conduct that is policed in some way, then the possession of a body of knowledge, and finally the service of the public interest, which is what gets you a charter.

All those things need institutions. Any promise you make as an individual means nothing unless it’s endorsed by someone.

You look at all those things and ask whether you live up to the promise. Some institutions have completely lost control of the educational process, and most don’t enforce or police continuing education, so you don’t know who keeps up-to-date. In terms of a body of knowledge, which is the most important thing, well show me. Do you have research that’s been pre-digested, that’s authoritative, accessible and so on? There’s often a big library, but it’s not the same thing.

Much is made of the code of ethics, but much of that is hypocritical – I’ve heard some frankly distasteful things about people seeing themselves as better human beings because they’re professional. And finally, the public interest – well nobody ever lost a job or membership of an institution because they didn’t serve the public interest. So put all that together and look where we go next. 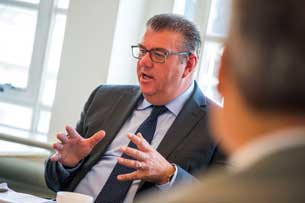 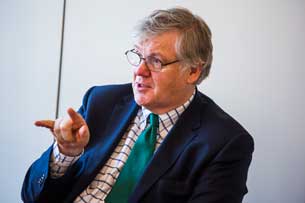 Peter Cheese, chief executive of the Chartered Institute of Personnel and Development: If you look around the table – marketing, management, procurement, HR – we’re trying to evolve our functions into professions for a variety of important reasons.

In a post-truth world, with many more people being far more mobile, with changing ways of work and relationships with employers, I want to know that the person I’m procuring from I can trust, that they’re not just someone who set themselves up after they read something on the internet.

There’s also a big difference between education and application, which is how being a professional is different from just having done an academic qualification – I can demonstrate the application of my knowledge and I can keep my skills current.

Having a badge, having that credibility, having a body of knowledge – all of these things, I’d argue, have never been more important.

Sean Tompkins, chief executive of the Royal Institution of Chartered Surveyors: We shouldn’t fall into the classic British disease of having something for 150 years and thinking everything’s wrong with it, when the rest of the world can’t wait to have it.

It’s one of the critical things that all big urbanising economies of the future are looking for, a mechanism to train quality people to run major construction projects. India has to build a city the size of Chicago every year for the next 25 years, but hasn’t got the professionals to help it get there.

Professions are probably one of the biggest things we have to trade, yet if you look at UK trade strategy, it doesn’t mention the word profession.

David Noble, group chief executive of the Chartered Institute of Procurement and Supply: I’m with Sean on this. There’s a huge demand for British standards internationally. The supply-chain profession has been unregulated for some time, but it’s an area that is increasingly seen as an existential risk for organisations, so we’ve been calling for a licensing of the profession. The demand for that has been extraordinary.

But I wonder if we’ve represented it well – are we getting the message across to ministers that you’re sat on a goldmine here?

Ann Francke, chief executive of the Chartered Management Institute: No minister cares if you talk to them about professional bodies. Their eyes glaze over and they say, ‘If you’d excuse me, there’s a FTSE 100 chief executive over there’. They really should pay more attention, because it’s an absolutely world-beating opportunity for Britain, particularly after Brexit. We should collaborate more effectively to encourage that.

Cheese: I agree we should collaborate more. We need to share a voice about what good business should be about, but we also need to be more consistent in the way we talk about being professional and the way we think about codes of practice and standards.

Tompkins: There is a collaborative role here, but you can’t always place the burden on professional bodies to do everything. They’re quite small institutions, in terms of financial scale and employees. There’s a need for a coming together of education, employers, professional bodies and government.

Chris Daly, chief executive of the Chartered Institute of Marketing: It’s not just for the professional body to act as regulator. There are other organisations out there that have legal powers to find people breaking the law. Driving professionalism is getting people to do the right thing, but we don’t have teeth, so we have to work very closely with regulators like the ASA and the FCA. 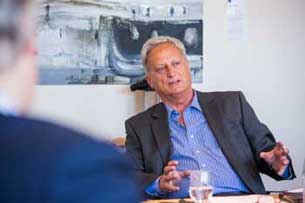 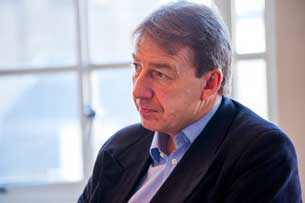 Cheese: We are big ecosystems, though. A lot of people are signed up to our perspective, so we can be a powerful voice, we just need to use it. We feel very passionate about representing the voice of the profession.

Morrell: If you go to your members and say, ‘We’re not representing you, we’re representing the profession, and we’re setting international standards because that’s what China needs’, then I’m sitting here asking, well, why is that worth the £675 I send to my professional body every year? The vast majority of members are interested in what you’re doing for them.

Tompkins: But these things are hugely connected – look at who’s investing in the country. When Tata comes to the UK, they will have an understanding of the professional standards to look for.

And when you pay your cheque every year, you’re renewing your commitment to professionalism. You shouldn’t have an expectation that you’re going to get a two-for-one TM Lewin shirt offer.

That’s where the professions lost it a bit. There was a period of time when professions tried to be member-service organisations, and that was a mistake.

When professional bodies became obsessed with membership services, they probably made decisions that were about commercial growth, not setting standards and enforcing ethics. They started to resemble trade bodies.

Andrew Taplin, MD Haymarket Network: That’s brave, you don’t hear that very often any more. Once you’re in, you think you’re in. But if you’re really serious about standards, you have to be able to remove people. 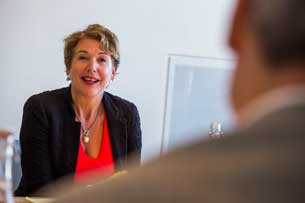 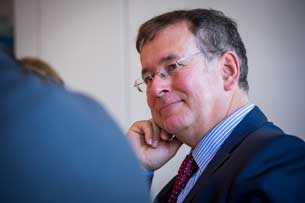 Tomkins: The issue of enforcement underpins the trust in professional integrity. We have 100 people working solely in regulatory enforcement. If we see people who aren’t going down the right path, then we will deal with it.

It’s about recognising the contract you’re buying into here. No one forces anyone to get up in the morning and take the RICS qualification. These people are saying there’s something more in this for me than just a degree, and because of that they’re going to succumb to having their learning interrogated throughout their life.

Ray Perry, chief executive of the British Institute of Facilities Management: Our numbers have grown to 17,000 within 23 years, and that’s very member-driven. There’s a real commitment there. Our intellectual property comes from those members engaging, developing best-practice guidelines etc. They want to be recognised as a profession. If you go into a sixth form and ask the students what they want to be, it’s unlikely anyone’s going to say a facilities manager, so there’s a big gap to fill.

Daly: In our case, no one’s going to die from bad marketing and anyone can become a marketer per se. So the benefit of having a chartered marketer should be access to that body of knowledge to help them make better decisions, and therefore for firms to get better returns on investment from their marketing spend.

Perry: In the article it says that in 600 years, 300 bodies were chartered, and in the next 80 years another 300 were. So they are obviously seen to be relevant – but in this day and age being relevant is about ethics.

Cheese: That’s an interesting point. We’re a charitable body, se we have that extra onus to act in the public interest, but we see that as being for us as a body, not our members necessarily. We’re trying to define the principles against which they can make situational judgements, about whether they’re looking at their own self-interest or they have others in mind. But I don’t think you’d go further than saying in any business that you should act in the interests of their stakeholders.

Francke: Young people are very principled, so if we go back to principle-based professions rather than rule-based, the young will be absolutely on board with that. Perhaps a lot more than the established folks of the 2008 era.

Gwyther: So are we optimistic about the future then?

Tompkins: Every so often I get the pleasure of seeing hundreds of young people getting their charter and their palpable enthusiasm for it. I wish we could bottle it. It’s just something that we’re seriously undervaluing.

To see more of the discussion on the day, you can watch our guests speaking about why a young person should aspire to a professional status; whether there's even a place for professions in the 21st century; and if professional ethics mean what they used to

This roundtable was sponsored by Haymarket Network.

C-suite roles might be famously well paid, but these animals are worth more. Much more. Take a look at the richest animals of all time.

Rich Westman, CEO and founder of start-up Kaido, argues that creating a strong learning culture will give your company a competitive edge.

Amanda Blanc, Aviva’s first female CEO, hits back at sexist shareholder comments at this week’s AGM and says the more senior she gets, the worse the behaviour

Businesses may need to cut costs as the economic situation worsens. But they should resist making redundancies, which are often counter-productive. Here are 6 alternatives.

"I used to take every 'no' personally. Now I am more resilient"

5 Minutes With… Tash Grossman, CEO and founder of Slip, the "receipt revolution" app that has just raised £750k in pre-seed funding.

Is part-time still a dirty word in business?

Two job-sharing intelligence chiefs save lives and still work part-time. It's time to drop the stigma.

The Timewise Power List showcases the country's most dynamic and successful part-time and flexible workers.

The rising stars of Timewise's Power List, proving that being part-time needn't be a cap on your ambitions.