Ed Miliband ‘doesn’t understand’ business. That’s the pretty damning view of Baroness Karren Brady, one of the country’s best-known businesspeople by virtue of her role as a judge on The Apprentice.

‘Labour has shifted so far to the left that I think most business people are very concerned about what will happen to their business and their growth if there’s a Labour government,’ the Conservative peer and West Ham vice chairman told Politics Home.

‘Sometimes you have to roll up your sleeves, you have to understand what it takes to run a business,’ Brady, who is also tipped as a London mayoral candiate, continued. ‘The more we chase business away or we depict business as bad, the worse this country will be.’

This isn’t the first time the Labour leader has come in for criticism from business leaders in the run up to May’s General Election. Boots boss Stefano Pessina warned a Miliband government would be a ‘catastrophe’ in February, while IoD director general Simon Walker said Ed had lost the ‘hard won respect of the City of London’.

A recent YouGov poll that found the vast majority of 1,227 ‘senior business decision makers’ thought the Tories would be better for big companies’ shareholders, employees and customers, as well as the economy as a whole, will also cause headaches for Labourites hoping their pro-EU stance would distract business from Miliband’s more populist policies. 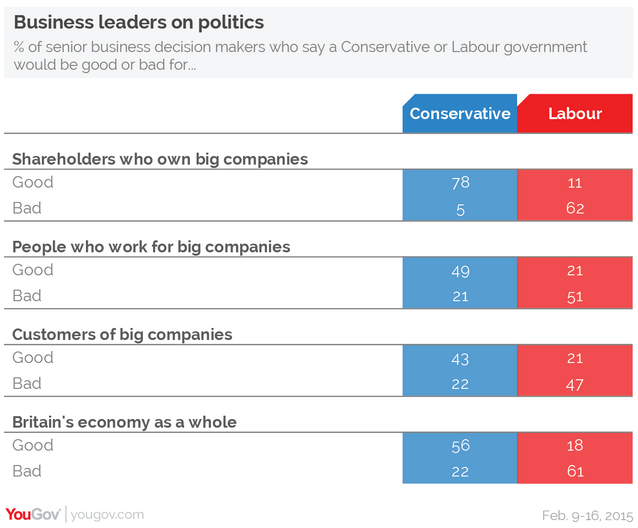 And Miliband isn’t dialing down on his left-leaning ideas either. After catapulting the ‘Big Six’ energy companies into the realm of business baddies by promising to freeze to energy prices, he is now saying he will cut bills by 10% by the end of the year if he wins the election.

It’s not exactly the most sensible idea given how much private investment the UK needs to keep the lights on. But with the polls pointing to a Labour-SNP coalition as the most likely outcome in what is a pretty wide-open contest, Miliband seems to feel that populist pandering is his best route into Number 10, rather than looking to work with the people and companies that actually create jobs.