The Co-operative Group took another sidestep away from the original spirit of the Rochdale Pioneers this morning, announcing that it may sell off its 15 farms and 750 pharmacies. It’s understandable: the BBC reported this morning that the company is likely to announce £2bn losses in its end-of-year results in March - by far the worst in its 170-year history.

To be fair, both divisions are considered ‘non-core’: the pharmacy in particular has been under pressure from the NHS over recent years to lower its prices in order to keep prescription costs low. But its farms - which cover 50,000 acres in England and Scotland - are worth a relatively paltry £49m.

But Co-op shareholders - most of whom are also, lest we forget, its customers - have voiced concerns that by ditching its farming operations it is losing sight of the original principles under which it was established, and that it's cutting off its nose to save its bank. Which, considering its management made a solemn promise to retain its ethical positioning during the whole bail-in/bail-out/bail-it-all-about debate back in October, is worrying.

Labour, in particular, will be shaking in its boots: as this chart by the Electoral Commission and the Mirror’s Ampp3d blog shows, it gets over £1m a year in donations from Co-operative societies,. At the moment the Co-op is running a survey over whether it should keep making those donations. Presumably Ed Miliband is very nervous. 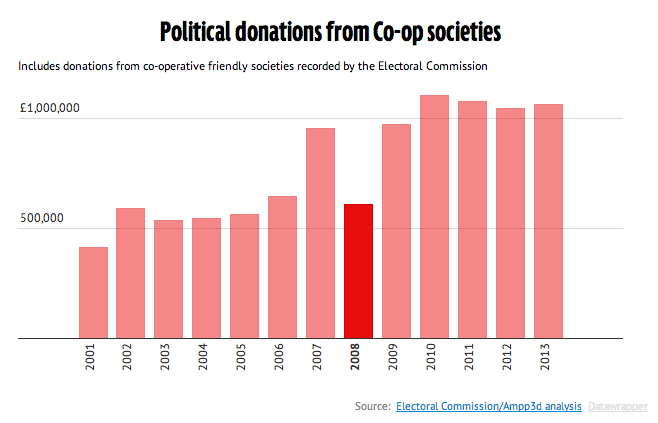 Still: the bank’s new hedge fund overlords are likely to be relieved boss Euan Sutherland isn’t being precious about how he turns the bank around. There’s no point having principles if there isn’t a company around to uphold them. The fact is that the Co-op needs to cut runnning costs by £500m: this is, sadly, a good start.