Emma and her husband Matthew have four children, Elizabeth, Kitty, Margaret and Michael, who are aged between 23 and 15. They employ 250 people, and have just turned over £15 million. Emma once wanted to be a literary agent but spotted a gap in the market for less formal earthenware: having never thrown a pot in her life she started her own business. She has recently published a book called Toast & Marmalade and Other Stories, which is the backstory to the brand and a patchwork of anecdotes – but ‘don’t mention the M word, I hate the idea of memoirs’. We caught up after she spoke at the Mumsnet Workfest conference.

How did you manage a growing business and four children?

With great difficulty (she laughs).

My mother-in-law (iconic mid-century textiles designer Pat Albeck) was amazing. She moved up the road from us and did a large amount of childcare – my father-in-law too. She was a successful designer and wanted to start her own business but never did. Something about her interest in business meant that Matthew, who I met two years into starting Emma Bridgewater, was hugely supportive and always committed to its success. There was a long period – about nine years – when I was flat-out reclaiming, re-organising and growing the business and he did the lion’s share of the family work.

How did you finance the business?

Unlike other brands, we didn’t take investment so we wholly own it. We started small scale and did a family whip-round.

Actually we’ve just bought shares back recently to keep it as clean as possible and so the children can have shares in the long run. It feels quite important to own it – perhaps because my name is over the door. It’s a legacy. We don’t want to sell it off to a bunch of venture capitalists. 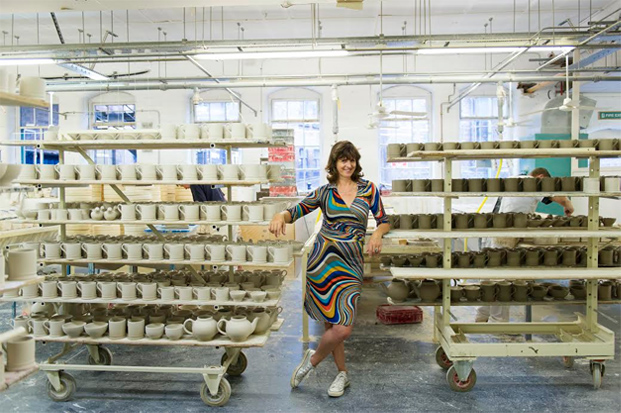 Bridgewater at her Stoke on Trent factory

I went into a conventional china shop in 1984 to buy mugs for my mother and was struck that what was on offer didn’t suit how we lived, in our kitchens. It was all formal, clunky and self-conscious. The industry was out of step with the market. I decided to make hand-decorated earthenware. I’d never thrown a pot in my life. I studied English literature so I suppose I was creative...

I was inspired when I went to Stoke-on-Trent to find someone who could take my drawings and turn them into shapes. I was bowled over by the legacy, the skills, the people and all the mess. I committed to the challenge of making one of those factories work again. Five years later we bought that first business I visited. It was in ‘Chemical Alley’ – that tells you what it was like at the time.

My father said when we bought the kiln that ‘manufacturing will distort your business’. He meant that it would move our focus away from design and marketing. He was right – but actually it has played a positive role. It has driven us, we literally have our hands dirty in the work of the business.

How important is it to you that your manufacturing is done in the UK?

Extremely. I’d hate to manufacture overseas, even if it is more profitable. When you buy a mug for a pound or two, it’s not the real price. The price is paid by developing countries, who have yet to legislate to protect their people and environment. You are literally pouring pollution into a river, belching smoke into the air and cutting off children’s fingers. Once you understand food miles, you can’t think that plate miles don’t matter.

We should buy nice things and know where they come from. My fear is that we buy so much, too much stuff.

Oh there have been. We’ve managed because Matthew and I have balanced each other’s highs and lows and got through it.

For years we didn’t take money out of the business, although we have redressed that recently. But it strikes me that it’s important if you run a business that you must do what you are passionate about.  Because you’ll often wonder what you have to show for it.

You say you’d never made a pot – so what were you passionate about?

The jobs we create. I have many doubts, I doubt everything. The only thing I never doubt is that we have created 250 jobs. I didn’t know it was providing employment that would drive me.

It’s been wonderful to find my metier. You feel you have so much inside you when you are young – I see it now in our children – but you don’t know what you’ll be passionate about. I went to school where girls were going to be doctors and lawyers and was so envious of anyone with that kind of vocation. 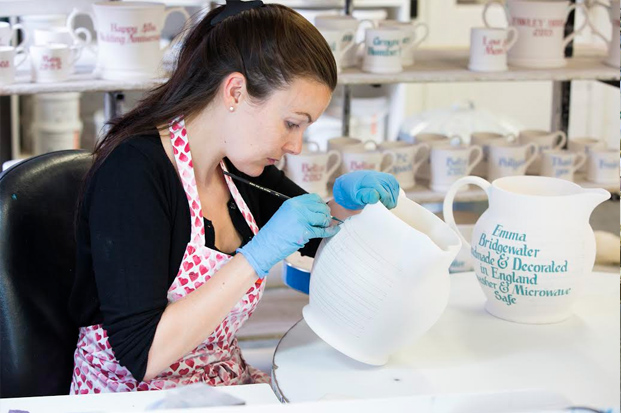 What advice would you give someone who was going to have kids and have a business?

Are you sure you want to do it? I’d say: it will be hellish. You will work incredibly hard. I was a slacker at school but realised that I was prepared to work 18 hours a day once I found what I wanted to do.

What advice do you give your children?

Go into the world and find your place. Don’t feel dragged into the business – but I catch myself even as I say that.

There is a bit of me that often thinks how much better off our economy would be if we were more like the Germans and believed in family businesses. But in our own English and idiosyncratic way I know our children must find their own paths. We are such wilful individualists as a nation: if they wanted to join the business that would be great, but they have to want to. And anyway, you can’t just jet them into a job.

One piece of advice I do give people is to target a company you really admire, find out everything you can about them and then wear them down until they let you in. It doesn’t matter what you do when you get there, just learn everything you can.

Is it hard running a business with your husband?

(Laughs) Yes it is hard. But what isn’t? And having things in common is good. We are very wound up in each other’s lives. It is a nice feeling actually. But it means the children never get a word in edgeways. We certainly always have things to talk about.

Definitely thriving. Matthew and I fire off each other. Designing is what we love. The time to stop is when we don’t have new ideas for products.