The first floor of a branch of TK Maxx in Clapham Junction is not a likely place to experience an epiphany. Here on the clothing rails are hundreds of yards of unwanted clobber - what is known in the trade as 'distressed merchandise': the football shirts, girls party dresses, sweat pants, dodgy cheap suits, ties, socks, belts and so on that TK Maxx has acquired from suppliers that failed to shift them.

Nearly all of it has been shipped to our shores from the sweatshops of the Far East. It's all part of the explosion of imported manufactured stuff that has found its way to the west in the past 30 years.

We have many more material possessions than the previous generation did. Middle-class kids in the 1960s like me had one pair of shoes for each half of the year, probably two or three T-shirts and a British-made M&S anorak or duffle coat. I've just looked into the wardrobe containing the threads of my three and five year-old and stopped when I went past 30 T-shirts, not one of them made here. And this isn't just the case for a comfortably off bourgeois.

We have been voracious consumers. Research conducted at Cambridge University found that, as clothing prices have come down in the UK, the number of garments bought has soared fourfold.

The study found that the average British woman buys half her bodyweight - 28kg (62lb) - in clothing every year. However, the average British family spends about 45% less on clothes today than 40 years ago. Clothes are now super-cheap: in 1969 we spent almost 9% of our money on clothes, compared with about 5% in 2007.

A TV cost more than a month's work for an average earner in 1969, but costs less than two days' work today. So why have one when, like many Americans, you can have a flat screen in every room?

Last year, Robert and Edward Skidelsky (father and son) published their book How Much Is Enough? The love of money and the case for the good life (Allen Lane). The authors set out to find the answer to what seems a simple question: how much money does any of us really need?

Skidelsky Sr is the biographer of John Maynard Keynes and the book's genesis lies in Keynes's belief in the late 1920s that the capitalist system was capable of delivering a sufficient, sustained and steady rise in workers' output so that in due course such people could have everything they could possibly need (or even want). 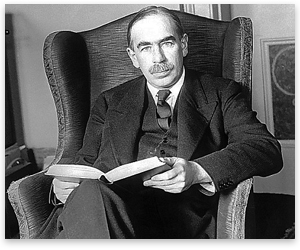 , enjoying the kinds of edifying pastimes that he approved of - painting, reading and watching ballet.

Keynes was, of course, utterly wrong in his supposition, as history has shown. We scoff at his naivety and note that it is not just investment bankers who refuse to be sated by their vast salaries and choose to toil long into the evening to increase the size of their outrageous bonuses still further.

The Skidelskys dislike the culture of excess and argue that our progress should not be measured simply by increases in GDP or per capita income. They argue in favour of higher things, of activity 'without intrinsic end'. (There has been some acknowledgement by the Government that other yardsticks need to be considered, hence the widely derided 'Happiness Index'.)

This thoughtful book received a sometimes frosty reception. Even the liberal New York Times noted that 'it is ridiculous to think that if people worked just 15 or 20 hours per week, they would use their leisure to cut marble or struggle with a musical score. If they lacked consumer products and services to fill up their time, they would brawl, steal, overeat, drink and sleep late.'

However, it's often hard to deny that we live - despite the downturn since 2007 - in a culture of excess. Most of us have far more stuff than we really need or have time to enjoy. With alcohol at historically low prices, we booze to excess. Why get merry when you can have so much that you get legless. And we are growing collectively more obese (see panel).

As a nation, at our worst - to use the Spinal Tap phrase - we have the amplifier dial turned permanently up to 11. We just cannot keep the noise down. When we discuss events such as the awful death of 'benefits menace' Mick Philpott's six children in a Derby house fire, the tabloid-level discourse is shrill in the extreme.

And, then, there is our attitude towards borrowing money. Both publicly and privately, we are legendary bingers on cheap cash, kickers of the debt can down the road. One of the causes of the great crash was excess borrowing, especially that related to property - mortgages. As a nation, we gorged ourselves on cheap debt: often borrowing over 100% of the value of property and on an interest-only basis. At the height of their popularity such 'never never' mortgages accounted for 80% of home loans.

Such borrowers all assumed that a combination of inflation and constantly rising house prices would mean that the initial capital sum borrowed would cease to be of any relevance when the term of the mortgage came to an end. We didn't even need to think about paying the bank or the building society back. Now the lenders are getting it in the neck for encouraging such excessive, unwise behaviour.

During the boom years, we gorged ourselves and became like one of those unfortunate super-sized, 40-stone individuals in a Channel 4 documentary who has to be winched from his bed to be bathed and 'toileted'. Then he has a heart attack followed by a gastric band and the need to have surplus skin surgically removed before... fattening up again.

But this excess is more than in just material consumption. It's also there in the gathering of wealth. Globalisation has led to vast riches for a relatively small successful elite.

What has also become excessive is the gap between those at the top and the lower levels of the pile. The newly published Sunday Times Rich List shows us yet again the almost unimaginable sums of money amassed by a small number. What on earth do they think they are ever going to do with it? Nothing is enough for the man to whom enough is too little, according to Epicurus.

As Larry Elliott noted in his review of the Skidelskys' book: 'We live in a country divided into workaholics who have more money than they know what to do with and millions of unemployed and underemployed citizens struggling to make ends meet on the proceeds of work in the informal economy or claiming state benefits.'

In this polarisation, we follow the US rather than our European neighbours. Incomes for the bottom 90% of Americans grew by only an amazing $59 on average over the 45 years between 1966 and 2011 when you adjust those incomes for inflation. During the same period, the average income for the top 10% of Americans rose by $116,071. The six heirs to the Walmart fortune are also an illustration of the excessive disparity. They had a net worth equivalent to the bottom 41.5% of Americans in 2010, according to an analysis from Josh Bivens at the Economic Policy Institute.

In the UK, according to Lloyds TSB Private Banking, household wealth has recently gone past £7trn for the first time; growing by over £2.7trn in the past decade. This is mostly down to property price increases in a culture obsessed by home-ownership, but there is a large divide in where it has accumulated. The wealthiest 10% of households hold 22 times more wealth, on average, than those in the bottom half. Also in Britain, the basic pay of CEOs in FTSE top companies was 47 times the average employee's salary in 2000; by 2010 this had risen to 81 times.

So, to quote that infamous materialist Lenin: 'What is to be done?' You are unlikely to make yourself popular in the UK by seeking public approval for a zero or even negative growth ticket. Stop the bus, we all need to get off! It looks as if the Government will be skewered in a future election for the prime reason that our economy has failed to grow very much since it came to power. We yearn to get back to the days of a little bit of irrational exuberance.

Showing some moderation or restraint is not a new idea. The environmental lobby hasn't liked growth for a long time: scarce natural resources are needlessly squandered, rather than husbanded, it argues. The whole argument surrounding 'sustainability' (whatever that wildly overused word actually means these days) is allied to behaviour that cannot be allowed to go on.

A disapproval of excess and excessive behaviour has been around since ancient times. The Greek goddess Sophrosyne embodied the spirit of moderation, temperance and restraint, and those who ignored her risked madness and ruin. The temple of Apollo at Delphi bore the inscription Meden Agan (nothing in excess). For us in Britain the answers are hard to come by. We seem wedded to the boom and bust, what goes up must come down, splurge and hangover model. Few show much relish for a flatter, more restrained, steady-as-she-goes Scandinavian model of society. Surely that would be too dull, too restrictive. And anyway, if you're the one to enjoy the high of the boom and manage to avoid the bullet of the bust, why worry? Enough already? Party on, Wayne.