Danilo Gabrielli launched his fashion label Danilo Gabrielli two years ago.  Originally from a small island off the West coast of Tuscany, Italy, he moved to New York in the early 1990s where he worked for the likes of Tommy Hilfiger before launching his own business in 2011. He made his UK debut when he launched his Spring/Summer collection at London Fashion Week last September.

Showcasing his Autumn/Winter 2013 collection at the Mayfair Hotel this week, he talks to MT about working 18 hour days, staying one step ahead of copycat designers and his commitment to manufacturing in the UK.

How did you get into fashion?

I’ve always loved costume and design. From the age of five my older sister and cousins would ask my opinion on what to wear. I originally went into the Navy but in the early 1990s I did a five-year course at the Accademia Pistoiese in Rome, one of the best fashion schools in Italy. I then moved to New York, where I spent 18 years working for big fashion labels including Tommy Hilfiger and Ralph Lauren.

Was it difficult to set up your own label?

After years working as a creative director I’d learned about budgets and working with factories, but I was never good at the selling. I’m an artist and a designer. So when I decided to go it alone two years ago, it was a huge risk. I gave up a good job, a wonderful salary, and working with big names.

Did the recession make it more difficult or did it create an opportunity?

There was less competition – not many designers are crazy enough to launch during a downturn. But you need to be conscious about creating things that lots of people will want. I can’t design crazy things because no-one would buy them and I would be dead after one season.

How long does it take to make one item of clothing?

One garment alone can take me a month to create. After London Fashion Week last September I came straight back to New York, where I’m based, and started my next collection to unveil during this season’s Fashion Week. All my clothes this season have a gothic design, and I look at paintings and costumes for inspiration.  I’ll then do a sketch, work out the proportions, the cut, the detail, and I decide on the material. If it’s not cut the right way you have to start again, and when you try it on the model, all the proportions might be wrong. There is a lot of work. Over December to January I worked 18 hours every day to get my current collection right. 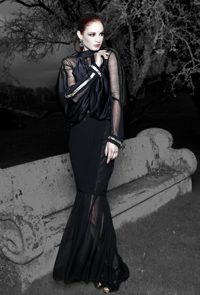 How do you keep one step ahead of copycat designers?

I’ve been in the business for many years. You can tell the difference between people who come to the shows and are really interested in the design, and the people who come just to get your ideas. When I did a show in the US, someone kept touching the pieces and taking pictures; and I thought, these are going to end up in China. You have to be very protective but there’s only so much you can control it. But I have some designs which I don’t think would be capable to copy. I buy pleated fabrics from one of the best factories in the world, which also does work for Chanel and Dior.

Where are you based?

I have a studio on 42nd street in New York, where I create all my designs, and a few blocks away I have my sample room. But my production is in the UK. I have nothing against people who manufacture in China and Korea, but it’s not for me. In the 1950s and 1960s everything was made in England, so there’s still that heritage attached to London.

I wish I’d started my own line years ago. I was too comfortable in my job because of the position, the money and the luxury life. I was scared to take a risk. Then one day I thought, no more. I’ve had enough.