Most entrepreneurs are ideas people at heart, and dedication to their original goal is often the driving force that allows founders to keep going through thick and thin. But sometimes you need to take stock and realise your best chance at turning your startup into a big business is by focusing on what your company really does best – not what you wish it did best.

One company which has made that successful transition is Concrete Canvas, a manufacturing business based in south Wales that employs 30 people. Founded by engineers Will Crawford and Peter Brewin, the company makes and sells a clever building material that combines the flexibility and portability of fabric with the toughness of rock. Today its main use is in civil engineering projects, but it was created to solve a completely different problem.

Crawford and Brewin met while studying on a combined postgraduate course at the Royal College of Art and Imperial College London. 'As a way of funding ourselves through that degree course we entered a lot of student design and business plan competitions,' Crawford told MT. 'One of those was run by the British Cement Association, and they wanted students to come up with new ways of using concrete.'

What they devised was essentially an inflatable concrete tent. The Conrete Canvas shelter is shipped in flat pack form and can be put together by a team of two in a matter of hours. After securing it to the ground and inflating the inner, you just add water to the outer layer and it hardens into concrete.  The thinking was that the shelter would be useful for disaster relief situations, where the danger to displaced people is often exacerbated by poor quality temporary accommodation.

The pair took the competition money, raised some private investment and landed a development grant, and set to work in 'relatively derelict industrial unit', turning their 1/8 scale prototype into a working product.

'We spent 14 months working extremely long hours,' says Crawford. 'You're very conscious when running a startup business that you have to see results within a short space of time because every week that goes by your cash is diminishing and you've got to get to a certain milestone in order to progress the business. '

But while the shelters are certainly innovative and eye-catching, it eventually became clear that the real commercial potential the entrepreneurs had created lay in the concrete material itself, which can be used for everything from lining ditches to protecting military sandbag barriers.

'We've had to adapt our original business 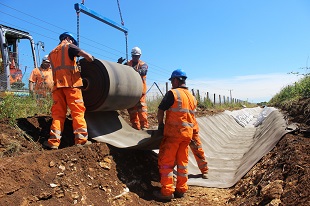 model selling inflatable concrete buildings for disaster relief into what the main the core of the business is now, which is manufacturing and selling construction products for the erosion control market,' Crawford says. In fact, the shelters now only account for 1% of the business' sales.

'The idea, looking back on it is the relatively easy bit – the much harder part is the commercialisation,' he adds. 'We came up with many ideas in two years, but it's taken us 10 years to turn one of those ideas into what is now a very successful business.'

It's certainly grown apace. Founded in 2005, the company's sales have grown an average of 118% annually for the last three years, reaching £5.1m in 2013. Around 80% of sales are exported, as far and wide as Russia, Brazil and Australia, and an American company also makes the material under licence for the US and Canadian markets. The success hasn't gone unrecognised - Concrete Canvas has received a big clutch of awards including a Queen's Award for Enterprise and silver medals from the Royal Academy of Engineering..

Crawford says the competition money they received was really useful in the early stages. ''There could be more done to encourage students, and particularly graduating students to look at business plan competitions and design competitions, because in my view that's exactly the point at which you want to encourage people to set up businesses,' says Crawford. 'And the reason for that is it's a time in your life when you've got the least responsible and you can afford to take the risk of setting up a new business.'

Perhaps the best lesson we can learn though is one of attitude. Concrete Canvas's initial business plan didn't take off in quite the way its founders hoped. But rather than give up or doggedly pursue something that didn't work, Crawford and Brewin adapted their model, using the best bits of what they already created to make a success of things.