British business has a problem with race. That’s pretty much the only conclusion you can come to from new Business in the Community research that shows black, Asian and ethnic minority (BAME) candidates are far less likely to get hired than white ones. 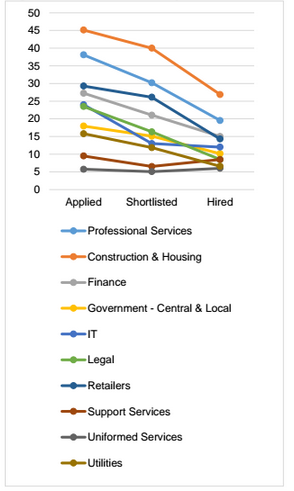 There is a significant drop off in BAME candidates getting shortlisted for jobs and eventually hired in all industries except ‘uniformed services’ and ‘support services’, both of which get a very low proportion of BAME applicants anyway. In construction and housing the fall is especially striking: more than 45% of applicants are from an ethnic minority, but they get less than 30% of jobs.

White people, on the other hand, apply and get hired at a similar rate across the board.