Currency speculators aren’t exactly the most sympathetic characters out there, but spare a thought for those who were aggressively shorting the euro in the run up to Christmas. They were left with egg on their face – and less cash in their pockets – after European Central Bank (ECB) president Mario Draghi disappointed them over the scale of Europe’s €60bn (£43.2bn) a month bond-buying programme. Is that the sound of the world’s smallest violin?

The euro rose 3% against the dollar in a single morning to $1.09 (73p) after Draghi announced he would extend QE to at least March 2017 and lower the overnight deposit rate from -0.2% to -0.3%. That’s intended to prop up the Eurozone economy and kick start inflation, which it predicts will rise to 1% next year and 1.6% the year after. The main interest rate remained at 0.05%.

It may be counter-instinctive that Draghi putting even a little extra liquidity into Europe would cause the euro to appreciate, as dollars would surely be more appealing as the US prepares to tighten monetary policy.

But speculators had more than priced that into their equations and bet on the euro sliding dramatically. Once they realised Draghi’s policies were fairly mild, they began frantically buying back euros to cover their short sells, sending the price up instead. How embarrassing. 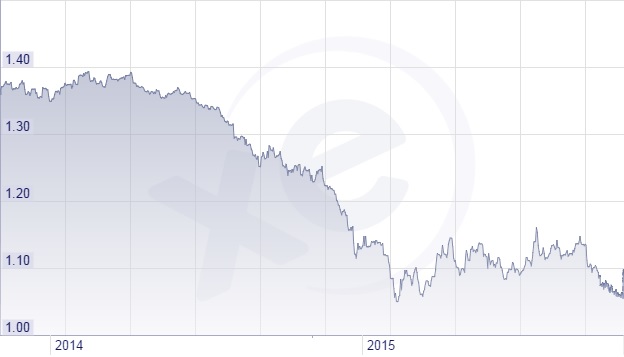 Today's rise (see the far right) rather pales in comparison to the collapse in the euro since 2014 when it became clear that European QE was on the cards. Source: XE.com

It’s a clear advert for the virtues of central banks giving plenty of clear signals to the markets before they announce their decisions. Everyone knows that Fed chair Janet Yellan is going to raise American interest rates in December, because she keeps on publicly hinting at how strong the US economy is and how it can handle tighter policy.

Given the impact wild currency shifts can have on businesses buying supplies or selling products abroad, Draghi and the ECB might want to take note of that particular strategy. In this instance, nobody likes surprises.

By Stephen Jones
17 hours ago
Coronavirus

By Matthew Gwyther
43 hours ago
Women in Business