Last night the irresistible force of Greek finance minister Yanis Varoufakis met the immovable object of Jeroen Dijsselbloem, the head of the Eurogroup of finance ministers, and it was not a pretty sight, as negotiations over Greece’s bailout collapsed amid mud-slinging and arguments over semantics.

It had been billed as a last ditch attempt to agree a new deal (after the previous last chance whizzed by on Friday) before Greece effectively runs out of money on February 28 and potentially has to leave the Euro. But the deadline has now been painfully stretched to Friday. MT can’t stand the tension.

Varoufakis claimed he had been ready to sign an agreement presented by European Commissioner Pierre Moscovici, but it had been withdrawn and replaced by an ‘absurd and unacceptable’ one that stated Greece would ‘successfully conclude the [bailout] programme’.

EU's Moscovici: "There is no alternative to a request for an extension of the program" #Greece @pierremoscovici pic.twitter.com/plvyFnO4Ax

Given that the left-wing Syriza party had been elected on an entirely anti-bailout platform, this was something the leather-jacketed former economics professor couldn’t swallow from the EU suits. ‘The only way to solve Greece is to treat us like equals, not a debt colony,’ he said.

Meanwhile, a draft of the offending second statement was leaked, with what were apparently Varoufakis’ angry scribbles scoring the page. 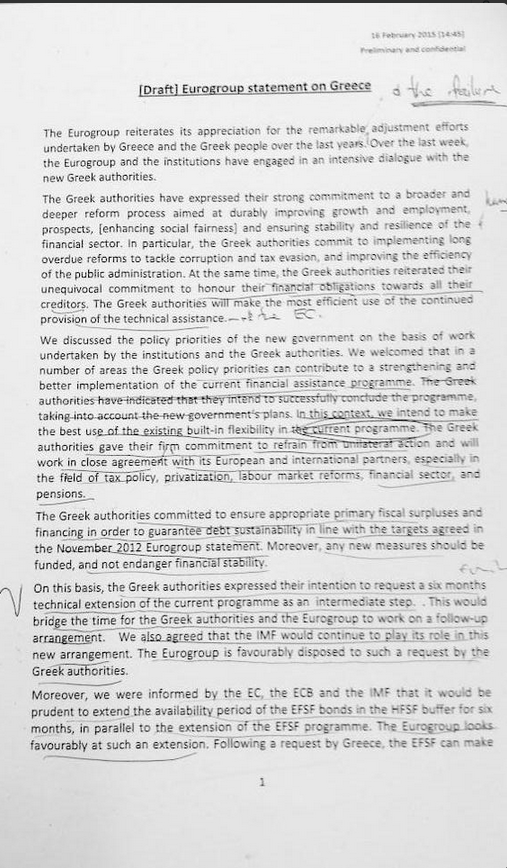 If this was meant as a clever negotiating tactic from game theory expert Varoufakis, then it doesn’t look like a particularly successful one. Exposing the behind-closed-doors acrimony only makes it harder for either side to compromise.

Then again, the finance minister said in a lacerating New York Times op-ed yesterday that referenced Kantian ethics that he wasn’t playing games. ‘I have no right to bluff,’ he wrote. ‘The lines that we have presented as red will not be crossed.’

The Eurogroup wasn’t budging either, though. The Greeks want a ‘bridge loan’ that would give it time to negotiate a completely new deal. Dijsselbloem tried to pass the difference off as semantic.

Dijsselbloem: "A bridging agreement. It may be words, but it sounds to me like an extension of the program" #Greece pic.twitter.com/hNcPtWSWkH

But any deal that isn’t an extension of the current bailout would need to pass through the German, Dutch, Finnish and Slovak parliaments, none of which are exactly the Athenians’ biggest fans right now. And the text that so irked Varoufakis said the Greek Government had agreed to hit fiscal surpluses ‘in line with the [bailout] targets’. That would mean an increase to 3% this year and 4.5% in 2016. Syriza wants it frozen at 1.5% - otherwise it can’t afford its promised austerity rollbacks.

The two parties look as frozen as Shackleton’s South Pole expedition, then. But something has to give. The Greeks are at the end of their tether after suffering six years of depression so, despite publicly staying it wants to stay in the Euro, Syriza could have privately accepted what may well be inevitable – the return of the drachma.

The frugal northern Europeans, led by Germany, don’t want to give Portgual and Spain any excuse to also renege on austerity. But if the Germans and their allies refuse to bend and a Grexit does happen, the whole Euro project could collapse anyway in one fell domino swoop. Some measure of compromise on budget surpluses and rolling back austerity looks like the only way out – but only if everyone can say a spade is not a spade.

The rise of virtual presenteeism