There’s been uncertainty surrounding falling unicorn (billion-dollar companies) valuations and many, including Microsoft co-founder Bill Gates, have warned over past ‘over-enthusiasm’ when it comes to investing in promising companies. There's been a bubbling fear of history repeating itself with the dot com bust.

And while Europe produced ten tech start-ups that were either sold, floated or valued by private investors at $1bn upwards for 2015, that's a drop on 2014 when it produced 13.

But a new report from GP Bullhound suggests it’s not all doom and gloom (as you might expect coming from a technology investment bank). In the past year Europe added another ten unicorns (three lost their status) bringing the total to 47, with a combined value of $130bn. There’s something to be said for the resilience of these companies, particularly in the face of unstable global markets and what seems to be growing scepticism surrounding fast-growth tech.

The UK continues to lead the way – 18 of Europe’s billion-dollar firms are based there, thanks to recent additions Anaplan (which sells cloud software for financial planning) and augmented reality company Blippar. Sweden, home to streaming giant (and Europe’s most valuable unicorn) Spotify, is in second with seven, while the likes of Luxembourg, Switzerland and Denmark have become proud parents to their first unicorns over the past year too. 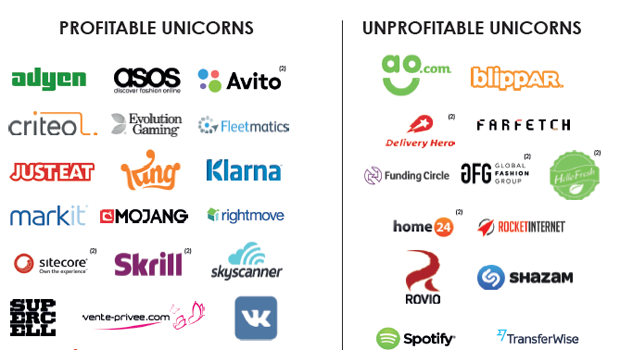 It does seem though that caution about enthusiastic valuations has put the brakes on a little – the number of European tech start-ups reaching a valuation of $1bn or more did fall in 2015. We're still yet to see whether the fears of a tech bubble will prove prescient or overstated, but this research does indicate many companies have steadier foundations than popular perception would have it. Of the businesses analysed, 60% were profitable according to GP Bullhound’s co-founder Manish Madhvani.

‘The key finding in our research however, is the comparison between valuations and actual revenue,’ Madhvani points out. ‘In the US, tech valuations are, on average, 46 times the revenue produced by that company. In Europe, this number is considerably lower, at 18 times.’ The line being taken is that what Europe may lack in quantity, ‘we more than make up for in terms of quality’.

And while the disparity between revenue and valuation is stark in the US, serving to create a market ‘inclined to dramatic combustions’, Madhvani claims European valuations are ‘much more rooted in reality’. US tech unicorns raised nearly twice the amount of capital as their European counterparts, but on average European unicorns generated $315m in annual revenues – as opposed to the $129m  generated by the American firms.

In fact, GP Bullhound is so bullish about the prospect of Europe’s billion-dollar companies that it predicts one of the 47 unicorns will push on to reach a $10bn valuation in the next few years and quite possibly a $100bn valuation over time. Instead of edging closer to extinction, our crop of unicorns is proving robust at the moment. It is difficult though to look too far ahead for such rapidly developing companies. Only time will tell if their health at present proves long-lasting.