How do business people in the 21st century use their company cars? Indeed, in a world where pay-as-you-go is increasingly the norm, do they even have company cars any more? In a bid to answer this question, MT has rounded up three very different examples of how the execs and entrepreneurs of 2015 elect to travel.

The cars they have to choose from are certainly evolving rapidly - with tough new CO2 rules on the way it's no surprise that the last few years have seen a flowering of diversity among alternative fuel vehicles.

And corporate buyers are as keen as anyone to reap the benefits of lower emissions and reduced fuel costs - last year company car sales accounted for just over half of the UK's 2.47m new car registrations, making the fleet market a huge driver of the push for lower emissions.

All of which means more choice than ever. You want an electric car that costs no more than a normal supermini to buy? Your Renault dealer will point you to the ZOE, complete with its battery-leasing contract. You want something prestigious? The Porsche Panamera hybrid saloon is as overindulgent as you'd expect of the brand, yet will cost around the same as a diesel BMW 520d in tax.

You want a posh SUV? Try the Volvo XC90 twin engine. You want diesel power, and the potential to run on electricity around town? Mercedes has a car for you. Perhaps something that can out-accelerate most supercars and still do 300 miles off a plug rather than a fuel pump? Check out the Tesla Model S P85D.

You get the picture; no longer does wanting low-emission wheels limit your options to a Toyota Prius.

In fact, sales of cars with sub-75g/km CO2 output - almost exclusively pure electric or petrol-electric plug-in hybrids - quadrupled in 2014 to 14,498 registrations in the UK, and look set to quadruple again this year. The figures show that uptake on these ULEVs, or ultra-low emission vehicles, is beginning to take off with the sort of zeal that diesel power did only a few decades ago. Iain Carmichael, who champions the electric car here despite his long commute, is a great example.

Yet, the car is not the answer at all for some business types, primarily the city-centric such as our internet high-flyer, Rob Burgess, who relies on the likes of Uber, Zipcar and Hertz to get about. For others, as Sandra Macleod shows, owning your car and foregoing the tax complexity of company car ownership may be a more sensible prospect.

So while the vehicles themselves are changing fast, the ways in which people use them and pay for them are changing even more quickly. 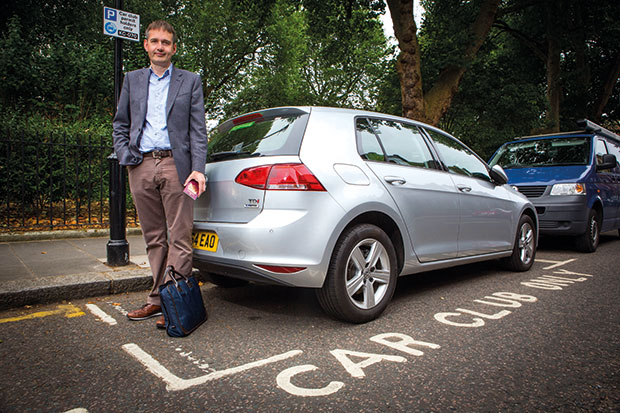 Rob Burgess doesn't run a car at all. 'I'm one of the first generation that never had a company car, never got offered one and never wanted one,' he says. 'I don't think I even know anybody that has one. For most people who work in London, a company car just isn't tax efficient.'

And Burgess should know, since his career in the capital started as a successful private equity and venture capital investor. Eventually, he left his job and found himself with time on his hands and a desire to do something useful with it that didn't involve long stints away from his wife and two children. The result was his website headforpoints.com, the largest frequent flyer site in the UK. For business travellers racking up big miles in the air, it helps get the most out of bonus schemes like Air Miles and Avios. The rewards can be substantial - we're talking family holidays, not key rings - as Burgess's own tally of around two million Avios points shows.

Burgess uses cabs regularly. 'With the advent of all the taxi apps, it's just so easy to order a taxi - and without having to walk up the road and stand at the kerb with a three-year-old in tow. We use Uber and Black Cabs apps a lot - probably around 20 times a week - most often to do the school run and then head into the office in St James or Mayfair,' he says.

His occasional need to drive himself is catered for by car clubs or a hired vehicle from Hertz. With 15 Zipcar locations within a 12-minute walk of his home, he reckons that there's generally one closer to hand than where he could have parked a car if he owned one anyway. For weekends in the country, hire cars are his answer, and those Avios points are sure to cover the cost.

Burgess's pay-as-you-go approach is increasingly representative of many inner-city business people who just don't need, or want, the hassle of running a car - company wheels or not.

While his estimated spend of around £750 per month on transport seems high, many would consider that pretty thrifty compared to the combined costs of running, parking and maintaining a car in the space-starved centre of London. It can even be more convenient too - what's not to like? 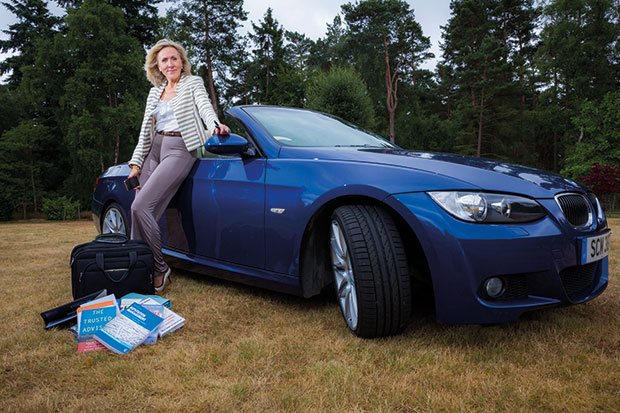 Sandra Macleod is a perfect example of a business owner who doesn't see the benefit of the conventional company car. 'As far as I'm concerned, the company car door was firmly closed back when the tax rules changed in the 90s. Even if I had many employees now, I don't think it's a benefit I'd offer.'

And as a woman who, over the span of her career, has employed more than 1,000 people, sold two businesses and had offices across the globe - New York, Paris and Singapore to name a few - she knows whereof she speaks. Macleod started off her career in a communications company, where she sharpened a talent for pinpointing weaknesses in brand image. She started her current enterprise, Mindful Reputation, two years ago, to help companies understand and improve public perception of their products and services.

In her books, a car is all about the balance of style and practicality. She owns her seven-yearold BMW 330d Convertible, which was 'a luxury present to myself, as the children were older so I was less of a taxi service, allowing me to downsize'.

In fact, it serves her needs so well that she's reluctant to let it go and upgrade, even though she feels she should. Not only that, but of course image plays a big part. 'You're branded by association - just like when you pick up a newspaper on the train, it's the same for cars.'

Family responsibilities still call for big miles at the weekend, plus a fairly rural location in Surrey means she can't sacrifice versatility for something entirely extravagant, either. Balancing this and a desire to do the right thing environmentally and keep fuel economy down is proving tricky. 'It feels like there are mixed messages from the government at the moment about whether petrol or diesel is the right way to go, and I don't yet feel that electric cars have the answer for us given the distance we travel.'

So, it's not only company car users who feel at the mercy of government policy fluctuations - illustrated by the recent budget that will see many low-emission vehicles attracting more Vehicle Excise Duty in future. Choice of petrol, diesel or electric aside, buying your own car outright is a viable option for many top earners, and owning your assets still has a strong appeal. 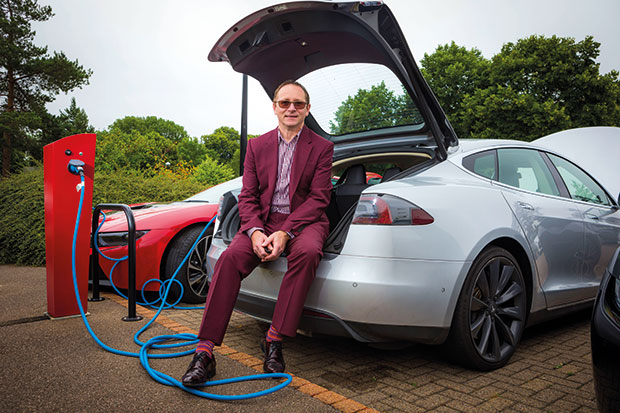 Iain Carmichael is better placed than most to make a canny decision when picking a company car. Having previously worked for Seat and Audi, he's now in charge of furthering Tusker's success - a national fleet car provider that manages 500,000 or so vehicles for organisations including the NHS. So it's telling that he has chosen to run a Tesla Model S - MT's own electric car of choice.

Carmichael's incentives for getting the Tesla were mostly financial. 'I do a 120-mile round commute each day between Watford and Towcester, so running something like a BMW 520d would cost around £65 or more each week. Then there's the BIK (benefit in kind) tax costs, which are also much cheaper. They were actually free altogether when I got the car in 2014.'

As Carmichael points out, the Tesla makes less sense as a salary sacrifice car, where you'd be paying high lease costs, so running it based on a conventional CO2-band company car basis is more sensible. He's a huge fan of the Tesla's practicality and performance, and other benefits brought about by its electronic innards - including software updates that bring new functions overnight, as he found when his car gained adaptive cruise control one day.

He has chargers at home and work, and there are a growing number of Tesla's own free rapid chargers around, so with the car's 250-odd mile range he has yet to run out of juice.

'Electric and range-extender cars are becoming more popular in fleets, especially with more manufacturers entering the market - Mitsubishi has made a huge difference with the hybrid Outlander SUV, for instance.'

However, the Chancellor George Osborne has cast his beady eye on incentives for low-emission cars, and Carmichael is conscious that the trend could change. Currently, all cars that offer a plug-in electric range are eligible for up to £5,000 off list price, but that's set to be reviewed later this year.

For Tusker's business any reduction could be critical, he says. 'It could make a big difference, as if it knocks demand for these low-emission cars, it'll also affect the resources being put into the charging infrastructure.'