While many cash-strapped families struggle to stay afloat until the next pay day, it’s a different story for the world’s richest individuals, who are worried about having too much money.

In a survey which reveals the top fears of the world's wealthiest people, one of the most common is that their money could deprive their children of drive and ambition.

This fear is second only to worries about their health. Worries about failing investments, inability to provide for the family, not spending enough time with the children, and divorce also feature in the study by law firm Withersworldwide, which surveyed people with fortunes of $10m (£5.9m) and above.

The report, The Meaning of Wealth in the 21st Century, surveyed 4,500 individuals and interviewed 16 ultra-rich families from Europe, Asia and North America.

‘For many parents, the main concern is that great wealth will scotch the individual ambition in their children,’ the report said.

It referenced the aphorism that family money rarely survives three generations. The original wealth creators know that business is ‘dirty and grimy and requires long hours and often weeks spent away from home’. Those who have watched their parents struggle to create an enterprise often find themselves bound, by duty or desire, to build on that success.

But the challenge comes in the third generation when the business has often grown too mature, too big or just too difficult to inspire a new generation.

‘For many wealthy families, simply having large amounts of money to invest is not enough to provide purpose and cohesion to the broader family group,’ added Sarah Cormack, a partner at Withers. 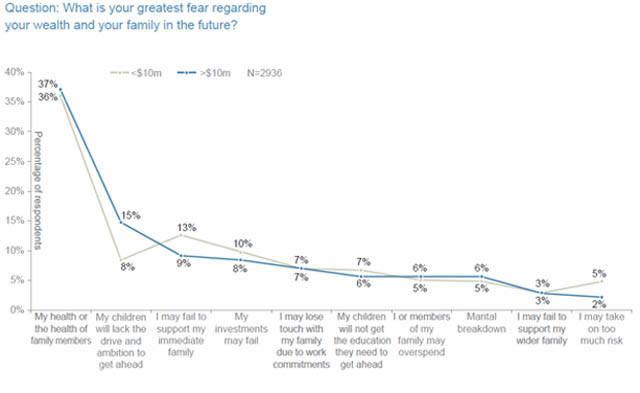 Many of those interviewed in the report said they were making charitable donations or setting up a new business to give the family a renewed sense of direction. Some had even drawn up a family ‘mission statement’, similar to a business plan, to keep future generations on the right lines.

Last month it was rumoured that 15-year-old Brooklyn Beckham, whose famous parents are worth £165m, had started a weekend job at a West London coffee shop earning £2.68 an hour.

READ: What it means to be wealthy.