I’ve seen fly-blown banana republics where you get shot on sight with higher standards of transparency and governance than FIFA. The farce that ensued yesterday with the long-awaited report into how on earth Russia and Qatar came to win their bid for the 2018 and 2022 World Cups saw FIFA subjected to levels of scorn and ridicule usually reserved for North Korea or Robert Mugabe’s politburo. The Times’ headline this morning is ‘Zurich: the place where truth goes to die.’

What is so alarming is the way in which FIFA appears able to drag down individuals thought to have the highest levels of probity and integrity into their mire. Hans-Joachim Eckert has worked for almost 40 years as a senior prosecutor investigating money laundering, tax fraud and organised crime. Surely nobody could pull the wool over the eyes of a presiding judge of the Munich penal court, a stalwart who has preached: ‘Ethics and morals are the basics of life.’

But yesterday Eckert gave an expectant world a mere 42 page summary of a report ten times longer that exonerated Qatar and Russia - which had ‘lost’ all its incriminating computers - and chose to give the UK FA a jolly good kicking. (Well at least when it comes to corruption we are small fry and not very good at it. We did lose the bid after all.)

He was immediately condemned as being complicit in a cover-up and Michael Garcia, Fifa’s furious independent investigator, protested that Eckert had taken 430 pages of evidence and made ‘numerous materially incomplete and erroneous representations of the facts and conclusions’.

Football’s problem is money. Far too much of it. It’s a massive business with a pitifully  immature sense of governance. It now represents half of the global sports event market by value. Its reach is stunning - footage of children dying from ebola in West Africa often shows them wearing a knock-off shirt from a UK Premier League team. Clubs are the trophy playthings of oligarchs and oil rich half-disguised sovereign wealth funds.

At the high end it has become a decadent sport wrecked by fountains spewing cash. It’s the Circus Maximus of the rotting late Roman empire, except surviving gladiators leave the arena in one of their six Ferraris. (In our own country so little of this cash tsunami ebbs its way into the backwaters to nourish grassroots development that we have the continuing embarrassment that is our national team.)

Presiding over this, Sepp Blatter makes Caligula look like a primary school headmistress from Godalming. How does this man survive? He has more lives than Bernie Ecclestone. FIFA is classically old-school Swiss in its love of the arcane and obfuscated. Even the Swiss banking industry, which has been forced to clean up its act by an angry US administration, looks semi-virtuous by comparison. 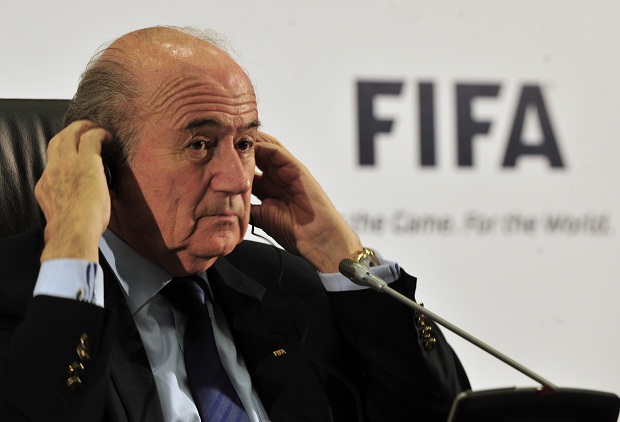 It’s hard to know what to do. There is no way back to the Corinthian spirit of old. We aren’t going back to jumpers for goalposts, Bobby and Jack Charlton, baked beans on toast for tea and players suffering brain damage because the leather-covered, inflated pig’s bladder of a ball got so heavy in the muddy wet that many centre forwards wound up with brain damage by heading it so frequently.

What will change things is an assault on two fronts. Firstly, the FIFA revelations are a hideous embarrassment for companies such as Sony, Coke, Visa and Adidas who are major sponsors of the game at international level. These sort of Swiss shenanigans are as bad for their corporate reputation as horse meat in a supermarket’s beef burger or the collapse of a Bangladeshi sweatshop for a clothes retailer. They need to get Blatter into a room fast, read him the riot act and give him the red card.

They may be assisted in this by the FBI. Few GMen will have much time for football  - the wussy pastime of soccer moms - being keen on the dismal NFL or tedious swingings of baseball. The news that they are keen to investigate the role their nation’s big companies may have played in kickbacks will further focus minds. And they have a witness in the splendidly massive and wonderfully named figure of Chuck Blazer, a former member of FIFA’s ex-com who is now singing like a canary.