The list of individuals and institutions held to blame so far for the great crash of 2008 is both long and varied: Alan Greenspan, Gordon Brown, feckless Greeks, Goldman Sachs, Mervyn King, undeserving subprime borrowers, Bill Clinton, selfish Germans, Fred Goodwin, Andy Hornby. To this we must now add the journalists.

Dean Starkman has a long, hard 360-page go at the fourth estate in his book The Watchdog That Didn't Bark: The financial crisis and the disappearance of investigative journalism.

An ex-Wall Street Journal staffer who is now a fellow of the Columbia Journalism Review, his thesis is that what he calls 'access' as opposed to 'accountability' journalism came to dominate in the 1990s and 2000s. The hacks got too cosy with and overly enthused by their subject matter and a cheer-leading 'CNBCisation' of business journalism was allowed to take hold.

The hacks forgot their moral duty to protect and warn the public of irrational exuberance, wrong-doing and impending danger. The media was merely market-messaging for investors who didn't want to hear any negative news. And by the time all hell broke loose, it was far too late, even for the saintly Peston over on this side of the pond, to save anything. 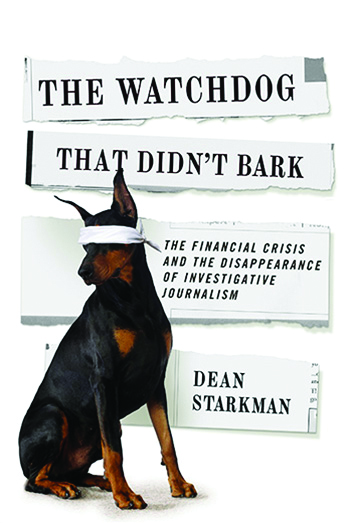 On the one hand, it's nice to be blamed for something more serious, more macro, than phone-hacking.

On the other, one has to ask is it entirely fair to lay the blame for the worst-ever global economic slump on us inky scribblers? Starkman says yes. With the auditing departments, rating agencies and regulators all up to their necks in it - while filling their boots - he sees the press as 'the last line of defence'.

This may surprise a few Brits. Americans take journalism far more seriously than we do. Over here, journalists describing themselves as 'professionals' are likely to elicit a smirk. We go in via the tradesman's entrance like a plumber or purveyor of the organic veg box.

With this US seriousness comes the expectation that journalists will deliver more that is in the public good. It is the country that produced Woodward and Bernstein's Watergate investigation.

That Brits went for the MPs' expenses scandal shows we're more interested in feeling outraged we're paying for the duckhouse in an MP's pond, than in lauding hacks who dig around in the entrails of the dangerous links between collateralised debt obligations and trailer-park homes in southern Louisiana.

One of the few individuals who is lauded in this volume is Gillian Tett of the FT, who did take a very left-field interest in those weird derivatives. (She has been rewarded with multiple promotions at that newspaper.)

Those who are more critical of the FT point to the fact that over its history, the amount of investigative reporting on a patch it knows inside out has been lamentable. You could argue the Sunday Times has done a far better job.

The biggest reason why the journalist bouncer didn't move in to question inappropriate behaviours is that nobody wanted the pool party to stop. We drank the 'it's a new paradigm' Kool-Aid and everyone just kept splashing about. It was only once the water ran out of the plughole that we found out who didn't have their costume on.

So, as business refinds its feet - albeit in the face of trust levels among the general public that are at an all-time low - don't expect any Watergate exposes any time soon. And those who welcome the prospect of Leveson-encouraged press regulation had better expect even less digging about now that those who do wrong will scream about their privacy and get a committee of worthies to decide whether the investigation is valid or not.

But this is too dismissive. This is an interesting book - scholarly, well researched, deeply serious. In many ways, the most interesting bits cover the history of business and financial journalism in the US. We learn about the origins of Dow Jones, and of Standard & Poor's, whose reputation got trashed post-2008.

I didn't know, for example, that the term muck-raking comes from the dogged investigation of the venal behaviour of Rockefeller and Standard Oil by the formidable Ida Tarbell of McClure's Magazine.

However, lest we at MT find ourselves on the end of another dressing-down next time we all go to economic hell in a handcart, I'm telling you now this recovery is going to end in tears.

But why, when it will all blow up again and how, I have no idea. Neither, I suspect, does anybody else, journalist, politician, regulator or Goldman Sachs wise guy.

The Watchdog That Didn't Bark: The financial crisis and the disappearance of investigative journalism