How do you cope with the need to attract new talent?

The first thing I would say is that an awful lot of people are attracted to growth, but they’re also attracted to a proposition whereby you’re trying to disrupt an existing model in the interest of its customers. So we have some real positives in terms of attracting talented people. It’s interesting in that as we’ve got bigger, as is logically and obviously the case, the opportunities for career progression inside the company have gone up.

The other interesting thing about energy businesses is our teams are so diverse in terms of the kind of talent that you need. On the one hand you’ve got people who have PhDs in statistical mathematics and are doing models of energy demand a couple of years into the future, through to people who are delving into customer behaviour, consumption analytics, how do people reduce waste in their energy spend, as well as technologists who are building innovations and process optimisation. There is also a pretty significant operational function where people are actually talking to customers every day either on the phone or digitally. One of the great attractions within an energy company is the diversity of roles is very significant.

What are the biggest cash-flow challenges your company has faced?

The thing about the energy industry is that if you’re not vertically integrated – you don’t own power plants and gas fields and whatever else – then you actually have to be in a position where you’re still buying forward for your customers. We identified that to really compete with the Big Six, you need a partner in those areas because otherwise you would consistently have very significant amounts of working capital tied up in covering your mark-to-market position of your forward order book. 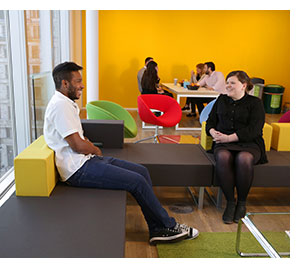 What are your biggest challenges?

In the same way that our greatest opportunity is the fact that 70% of UK energy customers are on the most expensive product, and 40% have never switched, and 30% don’t switch often enough to maximise their savings, we’re dealing with very able competitors here, big companies who spend a lot of money on marketing. And effectively they’ve been marketing to their customers that the best thing to do is nothing at all – that the safest, most secure position for you as a customer is to stay with the provider you’ve been with for years and years and years. So we need to be innovative and savvy and clever about the places we pop up and introduce ourselves to these customers to persuade them to take the money.

How entrepreneurial do you feel British businesses are compared with other countries?

Throughout my career I’ve been working with entrepreneurs quite a bit. I would say that the environment for British companies now has become much more vibrant, it’s much better supported – financially and governmentally. I think the UK has come along massively during the 15 years I’ve been involved in technology entrepreneurship.

Our education system needs to produce more technologists, engineers, scientists, and we need to invest more in this country in terms of digital and digital media expertise, but I think that’s happening now. From an entrepreneurship perspective it’s one of the most exciting times I’ve seen in my career, frankly.