First, a warning: if you are a Chelsea fan who subscribes to the theory espoused by the club manager Jose Mourinho that the world is out to do you down, then it is probably best to steer clear of this book. David Goldblatt is no enthusiast for the gloating, gleaming west London monolith.

'There is something peculiarly mean about Chelsea,' he writes. 'They possess a spiteful, arrogant metropolitan superiority that, though present at other London clubs, receives its fullest expression here.'

For sure Chelsea is not the only footballing organisation Goldblatt disparages in his coruscating account of our national game (he is hardly an apologist for the Football Association, the Premier League or the Manchester United-owning Glazer family either). To him Chelsea sums up the venal, bullying attitudes that have corroded the sport he clearly loves. He has more fun when writing about Newcastle supporters: 'On match day, in the Sky directors' box, they were spoilt for choice: zooming in on the bare, wobbly bellies of the Gallowgate, or framing a picture of a distraught, tearful young woman, the Geordie nation was caricatured as hopeless overwrought romantics and drunken buffoons.' 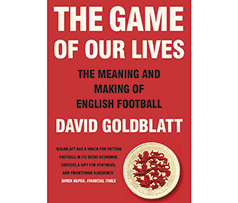 One of the critics' quotes on the cover of this paperback sums up the contents in a sentence: 'Could hardly be more impressive.'

That it comes from the populist historian Dominic Sandbrook is appropriate. What Goldblatt has done here is produce a footballing version of those sweeping histories of the 1960s and 1970s that Sandbrook pioneered. Rich in detail and anecdotes, quick paced and light of foot it gallops its way through the history of our nation's finest sporting invention, putting the present money-soaked bacchanalia in perfect context.

And, boy, can Goldblatt write. As capable of raising a chuckle as he is hackles, his chapter detailing the current fortunes of every league club in England is a startling tour de force of wit, energy and invention. The most impressive thing about that chapter, however, is not so much the thrill of the prose as its absolute authority. I confess I trawled it in the hope of discovering a chink in his knowledge. And found none.

That, though, is but a part of his overview. He takes in too the game's attitudes to race, gender, culture, media and, inevitably, class. His dismissal of the expensive middle tier of corporate seats at Wembley stadium and the habit of the patrons therein to stay in the bars long after the action has begun on the pitch is typical of his zestful precision: 'They are a visible reminder of the club class/economy class model of British life and a permanent dampener on the crowd's vitality,' he writes. Anyone who has been to the place recently could hardly disagree.

For Goldblatt, Wembley is an intriguing symbol of where the modern game stands: grandiose and impressive yet shackled by incompetence and debt. He begins his book with the unedifying truth about English football: its astonishing ability to remain loss making despite being richer than Croesus. Published just before the latest broadcast deal, he makes the point that when it comes to profitability, football is a rubbish business. Hailed as a huge British success story, sold around the globe, our Hollywood, the truth is the clubs that constitute the Premier League share a debt that would make Greek politicians shudder. A pathological inability to control costs, particularly in wages to star performers, makes the game a financial headcase.

Not that those who run it are stinting on their own reward. From corrupt former Thai prime ministers to gloating Geordie property magnates, Goldblatt's list of those who have made enormous personal profit out of other people's obsession is not a short one. Owned by the greedy and watched by the gullible: this is not an overwhelmingly positive view of our game that he presents. Yet there is a sense in his energy and wit that Goldblatt has not fallen out of love with football. He sees in fan-owned clubs like AFC Wimbledon and FC United of Manchester the sort of civic collectivism that once drove the nation. Indeed, this is his real point. Football more than reflects society: it is the perfect barometer for it. It tells you everything you need to know about where Britain stands now. Still visible, still noisy, still globally relevant, but riven with self-destructive stupidity, does that sound familiar?

Goldblatt doesn't offer solutions to the mess we find ourselves in. He just accounts for the way it is. And it is hard to argue he has got it wrong.

Jim White is the author of A Matter of Life and Death: A History of Football in 100 Quotations, published by Head of Zeus.

The Game of Our Lives by David Goldblatt is published by Penguin at £9.99.