My parents were my most influential role models. They were both teachers. My mum was constantly getting promoted and went on to revolutionise school meals in Scotland, set up school boards, and help to design and build new school buildings. My dad taught at the same community school for nearly 40 years; from the day the school opened in the late 1970s to the day he retired. So I grew up understanding the importance of education and how it can liberate people from pre-determined paths. I had a happy childhood. My parents split up when I was 15 – and we were all even happier after that.

On her early ambitions:

I went to secondary school during the 90s and wanted to be Ally McBeal; my dream was to become a lawyer and then drink wine every night in a piano bar. I studied law at Aberdeen University but realised within the first few weeks that I hated it. In order to change subjects, I’d have to wait until the end of the first year, then start all over again – and I couldn’t afford the extra fees. So I just stuck at it. I felt isolated and lonely; I was surrounded by people who were predominantly from private schools in Edinburgh and Glasgow and had family connections in law. I didn't belong.

On going into politics:

I wasn’t political growing up and I didn’t vote until I was 23. After I graduated, I got a job at Edinburgh University as a welfare advisor, providing financial advice and support for vulnerable students. I really enjoyed the one-to-one work but I was trying to fix a broken system; I worked out pretty quickly that if I was going to make any real material change, I needed to change the system. That’s when I got into politics and joined the Labour Party in 2003, back when Tony Blair was Prime Minister, he’d just introduced the national minimum wage and the party was successful and popular. I became an MSP when I was 29.

My career really took off in 2014; a live independence debate on STV with actor and activist Elaine C Smith shot my persona into the mainstream, and I was later elected to deputy leader. In the 2015 general election, Labour lost 40 of its 41 seats in Scotland, leader Jim Murphy resigned and all eyes were on me. I could either step up or step away. I didn’t ever want to be that person up front – I was always the side-kick not the superhero – but, out of a sense of duty, I chose to step up. Suddenly, at the age of 33, I was in charge. I had to pick a political party up off the floor and get it back on its feet. And one of the biggest things I had to do as leader was tell older men "no".

There was, for a short period of time, a lovely camaraderie between myself, Nicola Sturgeon [leader of the Scottish National Party] and Ruth Davidson [leader of the Scottish Conservative Party]. We did loads of TV debates and they’d always put the three of us in a tiny dressing room together. When you’re semi naked with mics and makeup everywhere, you can’t help but laugh and be like sisters. If you get a critical mass of women at the top, you can change the culture.

I did four elections and one referendum in two years. When you’re a political leader, you’re also the jannie [janitor]. You’re the first person up and the last person to bed. You’ve got the keys and you need to know how everything opens and how everything works. It was a huge responsibility, it was taking its toll on my personal life and I wasn’t happy.

Earlier that year, my best friend Gordon Aikman died. He’d been diagnosed with Motor Neurone Disease at the age of 29. He was an international gymnast and I watched him deteriorate before my eyes – but he taught me so much about how to live. He made the most of his final precious months and he didn’t waste a moment. That was a wake-up call for me.

I’d made my contribution to the party – we’d made a significant recovery and won back seven seats – and I wanted to step down on my own terms, not be pushed out. I resigned the day after my 36th birthday.

On I’m a Celebrity:

I signed up for two reasons. First, the money. I’d split up with my partner and we were battling over a flat we’d bought together. My legal bills were well over £10,000. So when the producers of I’m a Celebrity offered me £70,000 to spend three weeks and two days in the jungle, I couldn’t refuse. After tax, I walked away with around £40,000 and I gave £5,000 of that to charity. Second, it’s the most watched programme in the UK. I wanted people to see that not all politicians are 50-year-old white, middle-class men in pin-striped suits.

Everyone knew I was gay. I’d been living with my partner for the best part of ten years so it wasn’t a secret, I just didn’t talk about it. I didn’t want to be the "gay politician". I’d watched Ruth [Davidson] come out and for the first two years of her being in Parliament, every time you saw her name in a newspaper it was prefixed with "lesbian kickboxer". I thought that was so unfair.

If I was asked about my relationships or my sexuality during interviews, I’d always answer honestly but I’d say: "I’d prefer you didn’t use that. I don’t think it’s relevant." Everybody had respected that. Until one week in April 2016, the New Statesman called me and said, "We’re going to run a story that you’re gay and there’s nothing you can do about it." The hardest thing was having to call my mum – I was forced to come out to her. She said, "I’ve always known. I’m your mum." When I asked her why she hadn’t discussed it with me before, she replied: "It was your story to tell." And that was the most upsetting part about it all. It was my story to tell. It’s hugely disempowering when that’s taken away from you.

On her current role:

I’m a "rebel backbencher" now and I take my job as an MSP very seriously. I’m currently campaigning for better temporary accommodation for homeless people – families are being forced to live in hostels dirtier than crack dens and it’s shocking and unacceptable. I’m also working with an organisation called Dignity in Dying on how to help people with life-limiting conditions end their lives in a dignified fashion. I’m not very popular in my party right now because I’ve been speaking out against Brexit. It will be an economic disaster, our poorest communities will suffer and I believe it should be stopped. That’s not our party’s official line but I will not keep quiet and "behave".

Kezia was interviewed by Management Today's Kate Bassett at the Inspiring Women conference in Edinburgh in March. 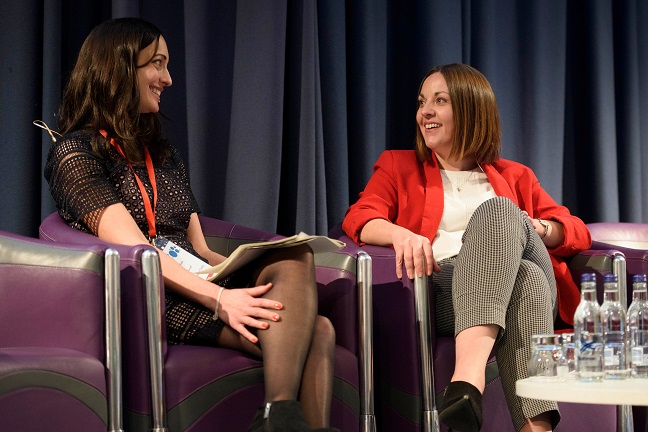 Book your tickets to our Young Women in Business conference on 30 May featuring Sue Unerman, chief transformation officer at Mediacom and author of The Glass Wall, and Antonia Romeo, Permanent Secretary, Department for International Trade.

Lessons from the leaders of the future

Want to know more about the future of leadership? Listen to the young leaders of...

Is successful change a fairy tale?

LONG READ: Why storytelling is a critical skill for leaders managing business change, explains a...